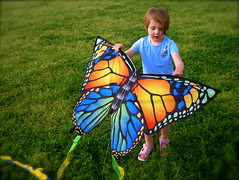 "We are like butterflies who flutter for a day and think it's forever." -- Carl Sagan

If you are an old friend of mine, you've heard about this before, so sorry. But it occurred to me recently that I don't think I've written about this in any recent version of my online jabber. It's an important Rob Fact.

About twenty years ago, I was sitting around watching television sort of aimlessly (some behaviors are eternal, I suppose) when a program came on about Monarch butterflies. By the time it was over, something had changed in me.

It told how every fourth or fifth generation or so, Monarchs cross North America by the millions, flying south from as far north as Canada at a rate of about 80 miles a day, braving birds and weather and the destructive human stain on the world, until they reach a cool mountain pass in the volcanic highlands of Mexico. Scientists have no idea how they manage it. The butterflies that actually make the journey have never done it before; they are the great, great grandchildren of the previous travellers.

When they get there, the Monarchs congregate in groups so huge that the branches of the trees bend and touch the ground from the weight of them. They meet and they have sex and lay their eggs, and then they die. Their children fly north and start the whole thing over again.

I knew then, even as a stupid teenager, that I wanted to go to Mexicao and experience it one day. For twenty years, it has remained the only dream of mine that has never wavered.

It's funny how many times I've shared this dream, with wives and ex-wives and lovers and friends. And despite the fact that a number of people over the years have expressed an interest in going with me, I think I always felt deep down that when I do eventually go, it would be one of two ways.

Alone, or carried by someone who loves me, in an urn.

I have no idea how it'll happen. I'm in better shape than I've been since high school; I'm actually closing in on weighing the same as I did when I first learned about the Monarchs. I'm healthier now than ever in some ways, and sicker than ever in others. It's a weird sensation, being thinner and fitter and yet waking up some days feeling old and worn down.

But if I stay healthy enough for a bit longer, there may come a day when I limp into the cool shade of a quiet Mexican mountain pass and hear the unimaginable sound of millions of tiny flapping wings. And if I'm lucky, I'll have company, perhaps the company I was destined to have all along and never even knew it. She won't be much of a conversationalist, but she'll sign "butterfly" because she loves them, too. She'll share the experience that I've dreamed of since I was young and the future stretched in front of me, a future full of promise and still empty of monsters.

If not, I hope that one day she'll go there for me, my ashes in her backpack next to her Big Box of Words, and be the last person to say goodbye to me.
by Robert Hudson at 2:49 PM

They're migrating now, there are millions of them in San Antonio - in huge clusters everywhere you look. It's incredible to see and a little sad because they get hit with cars and eaten by birds and you see their little bodies scattered about. But in the mornings, man I just can't describe what it's like to see thousands of them clustered around your house. It's ethereal.

There is a filmmaker from my hometown working on a documentary about the migrating of the monarchs: www.butterflytrees.com. I have met her through a former job, and she's a great person. I thought you'd enjoy the link. Monarchs are beautiful.

They pass through Santa Cruz, CA, too. I went to see them wake up one morning there. One minute the trees were full of what looked like dead brown leaves. Then the next moment, as the sun came out, butterflies everywhere. Truly magical.

Last April, some sort of climatological coincidence created an explosion of Painted Lady butterflies around the west coast. Apparently they're also migratory, but not usually in such numbers that you'd notice. One day I was walking to work through a small parklike area with bushes, and... the bushes were alive. Little flapping wings everywhere. They weren't as densely congregated as the monarchs, but it was still a bit on the magical side when they took to the air and swirled around me.

There's something immeasurably sad in this post. It brought tears to my eyes. Maybe it was the picture in my head of a grown-up Schuyler without her father who clearly loves her very much.

Now I want to send y'all there. How wonderful. Baby Fishmouth just met some butterflies for the first time this week while on a church retreat with her parents. Her comments? "Fy! Fy! Oooooooooooooo." And then she was verrrrry quiet, watching them.

Excuse me while I go buy a lottery ticket. I think Baby Fishmouth and I might go with y'all.

At the risk of sounding obvious... why don't you go? It sounds like it happens at the same time every year, so you could plan it. It's far away, but not terribly far. And goodness knows you want to. Don't wait for it to magically happen. I know you have enough that you have to do. But sometimes the best magic is the kind you make for yourself.

When I was in Junior High, my best friend Diane and I were out in my backyard in Pittsburgh one summer day and happened to notice them flying overhead. We ended up lying down on our backs and watching them just stream by for like, five hours.

I have no idea what 13 or 14 year old girls were doing hanging out in the backyard - I don't remember - but I'm sure glad we were out that day. I've never seen anything like it before or since. Every once in a while I look up, hoping to catch the right day again, but I never have.

Not fair making me cry this early in the morning--but the last 2 paragraphs did it.

What an incredible phenomenon...and I have a feeling that there are no words necessary or possible in it's presence, so Schuyler would surely be the right companion for the journey.

Come on down to San Antonio, I'll be more than happy to show you around. Another good place to go is Pacific Grove California. It is called Butterfly Town USA for a reason. It is a stopping point on the Monarch's annual migration. Having grown up in PG, Monarchs were never a big deal until I moved away. I'm enjoying seeing them again after so many years. I didn't realize how much I missed them.

What a beautiful wish to have Rob. I think we all have that one thing that we'd like to do before it's too late. I hope that you can find the special chance to do it with Schuyler, so that she can see your dream come true and experience it with her daddy. I am sure that she would keep the memory in the lock box in her heart and never forget it.

Schuyer is absolutely the perfect person to witness the butterflies with you. If any person in your sphere of friends and relations could fully appreciate the mystery, beauty, and spectacle of the mass monarch migration, it is definitely her.

I hope the two of you can go, sooner rather than later. It seems to me that you and your daughter would and should not be strangers to the millions of darting, orange butterflies.

I've seen them in Santa Cruz, too. Unfortunately, after we left the grove where they were located, our friend told us that the wooden walkways were a haven for rats. Now I can't even think about going back because I start to shiver. Butterflies are awesome -- rats, not so much.

You know, a loved one's ashes can seem like a pretty heavy burden. Please take her with you, and go together!

It sounds like one of those experiences where words would just cheapen it. This makes Schuyler the perfect companion.

if you ever want a smaller version of that, please come to santa cruz. at natural bridges state park (the woods behind the beach, basically), the monarchs come annually and cover every branch and bit of the trees. the trees are large, and majestic. and the butterflie beautiful.

Here's a link to a photo of them: http://www.terragalleria.com/california/picture.usca9542.html

2nd time visiting your blog. Its really GREAT I hope you know that. I was in Aruba in May & had the privledge of seeing this giant rare butterfly that lives 1 JUST 1 DAY and looks for a mate THAT day only .. or it'll dies alone and wont pass on these beautiful genetics..I saw it dry & fly & then search .. LIFES WEIRD! My friend was not impressed by "bugs" as she put it. I stayed alone ! It was ummm, alot to take in .. I loved it. go see them..C'mon, ITS A SHORT LIFE WE LIVE.. be happy.

I saw that show too... I was five or six (about 20 years ago) and I've never forgotten it either.

You'll make it there..

They've been scarce around here because of a big freeze in Mexico a few years ago, but this summer I'm seeing them again. I want everyone to plant native milkweeds to encourage them -- I'd never seen a Monarch caterpillar until the year just before the freeze, in a native prairie wildflower garden.

Oh yeah, and the last two paragraphs made me sob out loud.

We "grew" a painted lady butterfly from a caterpillar, through the chrysalis stage, and then set the butterfly free. It was one of the coolest things I think I've ever done with my kids, and they really enjoyed it. I hope you get to go on your dream trip soon!

No words. Do you know the comment pebble?
(o)

The Monarchs are absolutely amazing! I live not far from Pismo Beach in CA (ca 40 miles) where they congregate every year around November in a place called "Monarch Grove." They're everywhere in the tall Eukalyptus trees ... totally awesome! So, if you don't want to spend the money to go to Mexico, I'd be happy to find you a place to stay for a few days ...

With the limited comments, I wanted to post something that didn't need to be posted, only read, but didn't have the words. I still don't really have the words. It's a beautiful post, Rob, and I think Schuyler should definitely go on a trip with you sometime. I think she'd really appreciate it.

And maybe she'll choose it again, when it's her final time with you. What a nice wish.

wow, ok, i'm not reading in order, so maybe you won't have to train.

that's really cool that it's been a dream of yours for so long. by the way you describe it, it sounds simply amazing, and spiritual.......

i'm rooting for you to go, and more than once!

I have always wanted to see it. Since I first heard about it long ago when I was around Schuyler's age. It is still one of my deepest disappointments that I will never be able to as my heart cannot function at high altitudes so I've already been told that it's impossible. So I'm envious of you but glad since I think you will appreciate it the same way I would have. Someday I hope Rymer gets to see it as in some ways it will be like a part of me is there.