There's a new post up at Support for Special Needs, in recognition of the nine year anniversary of Schuyler's polymicrogyria diagnosis. It has been an indescribable nine years, and a tremendous contrast between fear and reality. 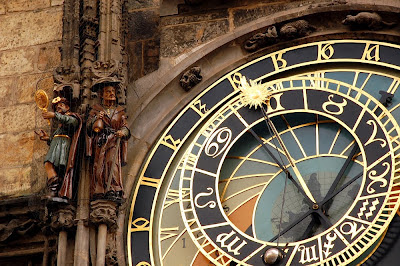 My latest post at Support for Special Needs addresses People First Language. I've written about this before, and I'm not sure my feelings have changed about it very much, but a discussion I had online recently made me think it might be time to revisit the topic. So here you go.

In other news, it is entirely possible that someone in a managerial situation in the city of Chicago might be saying to themselves, "Say, I'd really like to hire that Rob fellow to come work for me in my Factory of Hopes and Dreams, if only I could meet him face to face and determine if I like the cut of his jib."

Well, good news. Both me and my jib will be visiting next week. Let's make it happen. 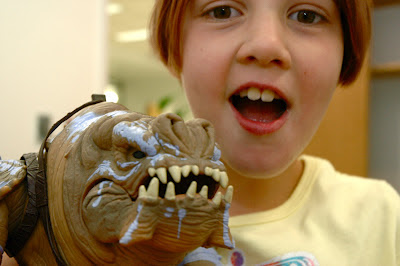 There's a new post up at Support for Special Needs. You will be perhaps ever so slightly unsurprised to hear that it involves the legal battle between the developers of the speech language app Speak for Yourself and the Prentke Romich Company.

Short version: We're getting involved, yo.
by Robert Hudson at 7:08 AM No comments: 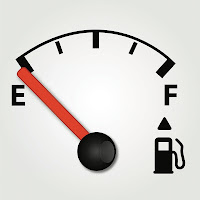 On Facebook the other day, I made a statement in regards to the rapper 50 Cent and his ugly Tweets in which he used autism and special education as cheap insults.


"I love a good outrage as much as anyone, but honestly? If I were required by law to give two shits about what 50 Cent thinks, I'd have to borrow them both."

A few people took me to task for that, and they weren't wrong to do so. While I haven't exactly changed my position on this concerning the amount of outrage I have been able to muster about 50 Cent and his opinion about anything at all, I do try to at least address my lack of outrage and what that might mean about me at the moment.

You can go read about it on today's Support for Special Needs.
by Robert Hudson at 9:06 AM 2 comments:

Buddy and the Way of Change 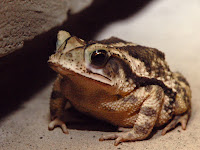 The way of the world is the way of change.

Just ask Buddy. If you can find him.

When we first moved to Plano almost seven years ago (it seems so strange to me to even say that, so impossible that we've been here that long), one of the first things we discovered was that living next to a duckpond and a city greenbelt meant a steady parade of interesting wildlife, like coyotes and a bobcat (named Bob, of course) and herons and even a snapping turtle that looked a little like something from Loch Ness. But our happiest discovery was a toad living just outside our apartment. We named him Buddy, for reasons that have long since escaped me.

Buddy would make a regular appearance right outside our door, and even in the beginning, he showed little fear. Being a twelve year-old boy at heart, I was never able to resist the urge to pick him up in those early years, and he expressed his displeasure in the way that all toads and frogs do. I believe they drink water all day just in case some manchild insists on picking them up.

But as the years passed, Buddy stopped peeing when I picked him up. He would simply hang there while I held him and showed him to Schuyler, who adored him from the beginning. He stood still while I took his photo. One night, I went outside and sat on the little stone wall next to our apartment and watched Buddy hunting for bugs. He had grown so accustomed to my presence by then that he went about his business without paying me any attention. I sat maybe two feet from him while he stalked his prey. As far as animal experiences go, it was pretty amazing. 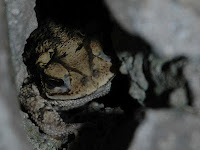 Over the years, Buddy has remained a constant summertime companion. We watched him as he relocated from the wall to a gap next to a manhole cover about ten feet away, and we saw him take on a lady friend. A few weeks ago, I watched him eat a not-small gecko, which was a disturbing reminder that in the world of small animals, toads and frogs are actually relentless killers. I was amazed that Buddy had been with us for so long until I looked up toad lifespans and found that toads can live up to forty years. Can you imagine that?

And then, shortly after the gruesome gecko incident, Buddy disappeared. It has been weeks since I've seen him. Did he move away, following a shift in his food supply? Did his new chicky friend want a bigger place? Did one of the herons that lurk near the pond make a snack of him? Or even the snake whose shed skin we discovered in the grass last week? Did Buddy meet with tragedy, or did he simply ease on down the road?

The way of the world is the way of change. We say our goodbyes and we move on, and we do so with hearts that are heavy or with souls that are electrified with possibility, and we take pieces of all the homes and lives that we've led before. Those pieces become part of the complex tapestry of ourselves. Some are bittersweet and even tinged with regret, but they're all part of who we are, and who we are to become.

When we moved here, we did so powered by hope. Hope for this place, hope for Schuyler, hope that we'd found a place that could be home. And here's the thing. It was. Plano was a good fit for us for a long time before it soured. I don't regret moving here, not one bit. It was the right thing to do, and it saved Schuyler as much as any other choice we ever made.

Now that things have stagnated and now that Schuyler's future and whatever independence it might contain loom larger and more immediate, we could have stayed longer. Perhaps we should. And given the precarious job situation, perhaps we will be forced to do so a bit longer. But it's time to go. The way of the world, and the nature of change, is that it is rarely convenient. Change involves the breaking of things, not just building but rebuilding.

It's not easy. If it was, we'd all embrace change the way Schuyler does. She lives for change; she thrives on it in a way that runs counter to almost everything you've ever read about kids with disabilities. For Schuyler, their are no routines, only ruts. And so in her mind, the idea of moving to Chicago and starting at a new school and having new friends and expanding her family, it all makes perfect sense. She admitted to me again recently that she doesn't like her school now and doesn't have any real friends. If you're not a parent, I'm not sure I can explain to you how horrible and helpless that makes me feel. If you are, no explanation is required.

For Schuyler, change involves possibilities that are a little heartbreaking to me. She is eager to leave some things behind, and her ever-present optimism and belief in the future remains one of the more poignant aspects of her life to me. There's a lot that Chicago represents to us all, in ways that will become much more clear to everyone soon enough. We all have our personal as well as family reasons. But to Schuyler most of all, I think there's a persistent hope, possibly naive yet very real, that this time, she will find her place and her people.

I don't know what happened to Buddy, or if he'll return. If he does, one day in the hopefully imminent future I'll go pick him up one last time (from above, of course; pee on me once, shame on you...) and say goodbye to the only neighbor I ever really cared about. If Buddy has truly moved on, however, I can only say that I wish him well in his uncertain future. I wish the same for us all. 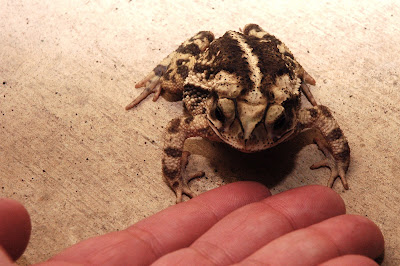 Update, 7/17: Buddy has returned! He let me pick him up last night without pissage, although he declined to have his photo taken. When I asked where he's been, he said he didn't want to talk about it. I'm guessing Vegas.

There's a new post up at Support for Special Needs, following my attendance at the 2012 AAC-RERC State of the Science Conference in Baltimore last week. Not a recap or anything that fancy, just an observation on one particular aspect of the conference.

One thing I didn't mention in my piece was the interesting observation that a number of representatives from the big assistive technology device makers were in attendance, which I appreciated very much. The discussions of the iPad and the consumer electronics in AAC tech couldn't have been a lot of fun for them. I was saddened and a little disappointed that PRC wasn't among the companies in attendance. I would have been interested in their input, and I'm going to say with confidence that they could have benefitted greatly from hearing what people had to say about the topic.

I don't feel like there's nearly enough active listening going on in the assisted speech industry at the moment, which is both ironic and a very great pity.
by Robert Hudson at 9:02 AM No comments: