On things which I really should let go without comment, but you know how I am

"The world breaks everyone, and afterward, some are strong at the broken places."
-- Ernest Hemingway
-----
Yeah, I saw it.

It didn't call me out, not by name. But the language felt familiar. The author is someone with whom I've corresponded a few times, and when I went back and looked at her emails, I discovered why her essay triggered a sense of deja vu. She'd said almost exactly the same thing to me in email, in response to my own use of the word "broken".

But that was almost two years ago.

I don't know what triggered this essay, and really, it doesn't matter. When you're the parent of a child with a disability, your life becomes a cycle of routine and unpredictability. It makes for a curious emotional mix, in which you find yourself struggling not to fall into a rut and at the same time struggling to avoid being knocked off the rails by the unexpected. (Ruts and rails. I'm mixing metaphors, sorry.) I don't know what brought this topic back up again, but it's obviously just as real for her now as it was two years ago, and I understand that completely.

I guess what I'm trying to say is that I'd be a hypocrite if I were to suggest that Michelle O'Neil is somehow wrong to speak her opinion about my word usage. There seems to be a perception among some that the disability community has (or should have) a universal approach to things like language, but nothing could be further from the truth. I have many issues with People First Language; I personally can't imagine anything worse than asking a child to "take ownership" of their disability while somehow believing that they can do so without also taking responsibility for it. But one thing that truly pets my fur backwards is the idea that People First Language MUST become standard usage within the disability community, professional and family alike. We don't all approach disability in the same way, and Michelle O'Neil's opinion about my use of language is as valid as anyone's. Well, of course it is.

At the same time, however, there was one part of her essay that troubled me.

The term "broken" continues to float around a bit in special needs circles. It peaks my curiosity, but no longer stings.

At best it is an attempt at conveying the struggle and challenges a special needs child faces. In no way do I dismiss those challenges. Our family faces plenty of challenges, but some children and parents deal with more than I can ever imagine and I mean no disrespect. At worst, however, the use of the term "broken" in reference to a child with special needs is a publicity stunt aimed toward offending.

I appreciate that she means no disrespect, but I guess I should be clear about something now. There are particular aspects of my writing that exist to get your attention. And when I feel like someone needs to be called out, I don't hesitate to do so. (Hi, Bernie Goldberg.) But where disabilities and parenting are concerned, I'm not sure exactly what I would hope to accomplish by intentionally offending other parents, people whose philosophies and approaches and sources of inspiration may differ from mine, but whose struggles and pain are all too familiar.

When I put Schuyler on a t-shirt or program Pinkessa to shill for A&W Root Beer, then you'll have your publicity stunt. (Note to A&W: Call me.)

* * *
"What will Schuyler think when she reads that you believe she's broken?" I'm asked, and the implication is that Schuyler will be hurt and insulted by the word. But to me, the question itself is offensive. It suggests that Schuyler is simple enough and unaware enough that she'll never know the difference, if only the people around her choose the right words.

Schuyler knows. When a TSA agent sarcastically asked her if she could talk, she simply answered "No," without sadness or regret or hurt. She knows, and she compensates, and while her lack of anxiety or sadness about her condition may not last forever, her understanding of exactly who and what she is and what she can be will always be her greatest strength.

"I can't talk," Schuyler says simply, her hand on her throat, but even as the listener begins to make that face, the one etched in unwanted pity, Schuyler is reaching for Pinkessa, impatiently waiting for it to power up so she can tell you that her name is Schuyler, and she's ten years old, and she has a dog named Max and a hamster named Swee. She's broken, and she knows it, but she's got a hell of a fix for that, and she's waiting for you to be impressed. Which you should be.

Broken things of little value are discarded. Broken things of worth are made whole again. Despite all my self-doubts, I continue to flatter myself enough to believe that come what may, Schuyler will always know in which of those categories she belongs. 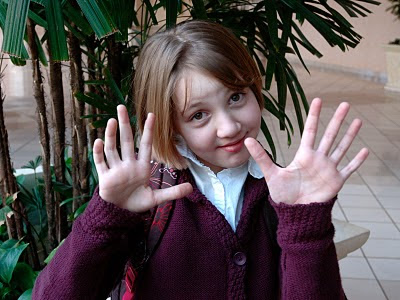 Email ThisBlogThis!Share to TwitterShare to FacebookShare to Pinterest
Labels: big box of words, my big opinions, schuyler, shepherds of the broken, the monster

After it snowed the other day, I went looking for video to show Schuyler what we used to call REAL snow. I knew I had some boring old holiday videos I could show her, but in addition, I found this ridiculous little thing I made in February 2003, on a day when we were snowed in with nothing much to do. (That much is clear.)

Schuyler doesn't remember Connecticut at all, which is sad to me. I miss those days, in part because it was in some ways a much more innocent time for us. In early 2003, we'd gotten past some hard times as a family and we still had that awful polymicrogyria diagnosis a few months ahead of us. Once we had the diagnosis and the monster was out in the middle of the room, it felt like everything had changed, and New England had lost some of its magic. I still wish it had worked out. I miss New Haven, a lot.

A few things stand out in this video. First of all, I was an idiot. But perhaps more important, I can see, to a degree that I guess I'd forgotten, that at the age of three years old, Schuyler was not verbalizing at all, not even a little. I've often pointed out that in the time that she's been using a speech device (which at the time of this video was still two years in her future), Schuyler's verbal speech has improved dramatically. But to actually see how far she's come is pretty striking now.

(I just noticed that the board with her velcro'd picture exchange symbols is visible in the background at one point. God, she hated that thing.)

As for Schuyler, when she saw it this morning, she started laughing and simply said, "Look, I was fat!" 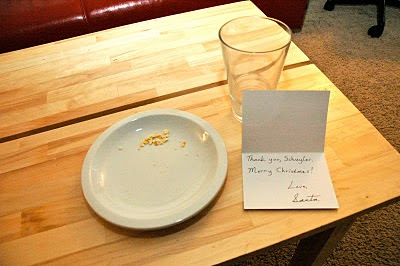 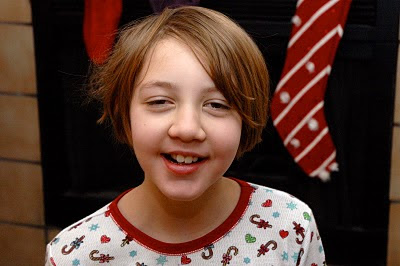 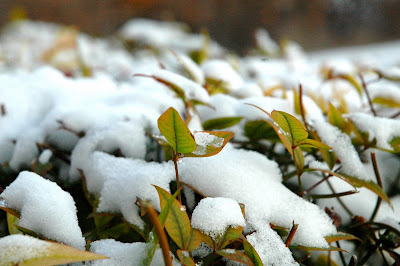 White Christmas, if you get up before it melts off. (Which it did.) 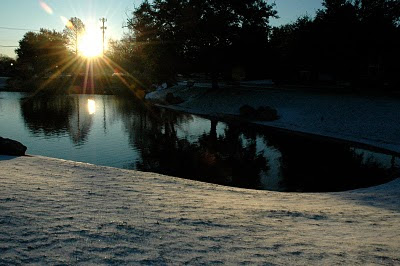 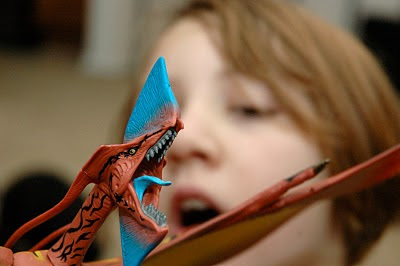 It's just not a traditional Christmas without a flying monster. 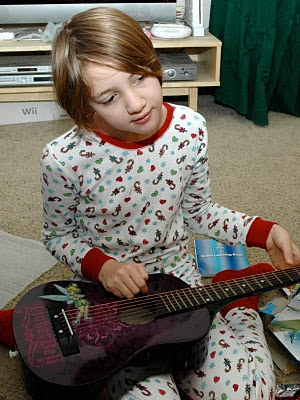 The guitar that she's been asking for all year. We're afraid that her polymicrogyria will make it hard and frustrating for her little fingers, but in the end, we decided that at a time of hope and renewal, why not let her give it a try?
-----
I hope that no matter what the reason for YOUR season might be, you have the very best possible holiday and a new year full of promise and hope, of dreams come true and all new dreams after that.
by Robert Hudson at 2:13 PM 11 comments: 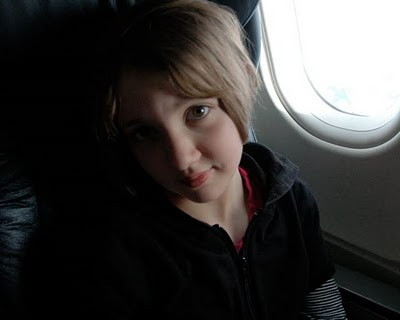 "It is rare that one can see in a little boy the promise of a man, but one can almost always see in a little girl the threat of a woman."
-- Alexandre Dumas
by Robert Hudson at 10:06 AM 26 comments:

Father of the Year nominations are now closed. 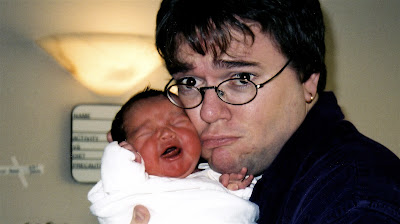 A few facts about the next few days, along with an inescapable conclusion.

Fact: Two of my best friends are getting married in Las Vegas on Monday.

Fact: They have asked me to take pictures at the event, which I am thrilled to do.

Fact: Julie cannot attend, as she has to work.

Fact: Julie can't watch Schuyler while she works, and school is out for the year.

CONCLUSION: I will be taking my sweet little girl to Vegas for her birthday.

When Child Protective Services meets us at the airport, I hope they'll help with our luggage.
by Robert Hudson at 11:12 AM 25 comments: 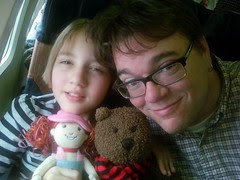 On the plane
Originally uploaded by Citizen Rob
I just wanted to take a moment and thank everyone from the North Carolina Assistive Technology Expo for a fantastic conference. Schuyler and I were made to feel welcome, and we met some truly amazing people, which is hardly a surprise by now. Our thanks to Chip Clarke and Dawn Haynes from PRC for their generosity, and to April Furr and my friend Elizabeth for making the logistics of presenting at something like this by myself with Schuyler even feasible.

It was a fun trip, despite the efforts of the TSA at the Raleigh-Durham Airport to ruin our return trip. (TSA Agent to Schuyler: "What's your name?" Schuyler: "Aye-er." Me: "Her name is Schuyler." TSA sarcastically, to Schuyler: "What, you can't talk or something?" Schuyler and I both: "No...") I never mind traveling with Schuyler, and she's got more patience for the inevitable inconveniences of flying than any adult I know.

She loves a rough flight, so when everyone else is white-knuckling, she's laughing her little head off. True story: When she asked me what was causing the plane to bump around, I told her it was a monster, because I'm that guy. She loved that answer, because she's that girl, and asked me the monster's name. "It's the Turbulence Monster," I said. Not five seconds later, the captain came on and apologized for the turbulence, and when he said the word, she looked at me in wonder and joy as if what I'd said just might be true. Thanks, captain, for that unexpected credibility.

It's funny, but in so many ways, I am reminded on a trip like this most of all that Schuyler is growing up, and into the young woman that I always wanted her to be. Happy, chaotic, funny, in love with everyone and afraid of nothing.

I had a realization today, something of an epiphany, really. It's one that I started to have, very tentatively, when I was writing the book, and I even wrote about it at the very end, although whether or not I always believed it is probably debatable. Today I realized that Schuyler is at a point in her life where there's no turning back. She's going to make it. She's not there yet, and not even close, but she knows what she has to do to get there, and there's a whole village of people watching her who literally will not allow her to get lost or fall through the cracks now.

I think I can see now that if something were to happen to me today, Schuyler would be okay. And that means the whole world to me.
by Robert Hudson at 1:15 PM 21 comments: