There's a new post up at Support for Special Needs. I'm actually not entirely sure what to say to describe this one. I quote an old torch song, "The greatest thing you'll ever learn is just to love and be loved in return." I think that quote might just sum it up nicely.

I'm still looking for a job in Chicago, by the way. You know, in case you were thinking of offering me one but didn't want to get lost in the crush of offers coming my way. Crush away. Seriously. Don't make me beg.
by Robert Hudson at 7:48 AM 3 comments:

A Day Without Lawyers

There's a new post over at Support for Special Needs. More talk about the legal song and dance between the developers of Speak for Yourself and the Prentke Romich Company. The whole thing has grown exactly as frustrating and ridiculous as you might imagine. Honestly, I'd write more, but the topic is exhausting.
by Robert Hudson at 8:11 AM No comments:

Email ThisBlogThis!Share to TwitterShare to FacebookShare to Pinterest
Labels: big box of words, my big opinions, nowhere near holland, support for special needs

Schuyler has always loved music, which is no surprise given that she's been surrounded by it from day one, and I've always sung to her. In recent years, we've sung to each other, in those moments we share alone. Schuyler and I spend a great deal of time together, particularly once she's out of school. She accompanies me to work most days, and in the long car ride, we sing, a lot.

The other day, we were singing an Eels song, which is hardly surprising to anyone who knows us. The music of Mark Oliver Everett has always been ours, Schuyler's and mine together, ever since she was a baby and I would sing My Beloved Monster and Me to her. It was fitting; she was my strange little monster, even before I knew why, and we really did go everywhere together, as we still do today. As she grew older, particularly in the dark days after her diagnosis, I would sing her to sleep with The Stars Shine in the Sky Tonight ("It's not where you're coming from / It's where you're going to / And I just wanna go with you…"), thinking of a future where she might have to go forward without me, or me without her.

But this week, it was a simpler, happier song, Beautiful Freak. Every time I sing it to her and point to her, she laughs, and the way she sings it back to me, in her strange tongue that so few in the world are privileged to hear and even fewer to understand, it makes my heart soar. We have so many nicknames for each other (her current favorite for me is "Daddy-O", which I adore beyond description), and few of them are gentle. Dummy. Butthead. Buggin. Space Monkey. Freak.

I look at her face carefully, searching for anxiety. Is this a word she's heard before, from the lips of mean kids? But no, there's nothing there. She's smiling. She just wants to talk.

I want to say no, but it doesn't feel like the right answer.

"We're all freaks," I say. "Everyone in the world feels like a freak sometimes."

"It's not bad," I say. "Sometimes people use that word to be mean, but it's only mean if you take it that way. Everyone is different, and you're more different than most, you know? That's why you're my beautiful freak."

I've always maintained that the only things I could really promise Schuyler are love and the truth. And so I've never pretended that she's not different, or that her difference wouldn't be difficult to bear sometimes.

Schuyler knows she's different. And when we sing, when she's a beautiful freak and she's loved for it, she's okay with it. It's a hard life for her, and it's not going to necessarily get that much easier, but it's hers and she's making her peace with it.

And I think it's pretty clear that Schuyler has figured something out about her father, something that the song reaffirms but which she's probably known all along, longer than I've been aware, even.

She knows that my love for her runs even deeper because she's different. That her difference fuels my affection in a way that is impossible to understand or define.

When Schuyler and I move through the world together, we do so in a way that is different from her other relationships. It's different even than those moments when anyone else is around. Schuyler gives her attention to others in a way that can be intense; I can only assume that there are a few restraining orders in her future. But when it's just the two of us, when no one else is there, we occupy a space that is ours and ours alone. Schuyler holds my hand when we drive. She claims one shoulder for her own and just holds on. We share food and we sing songs and we say snotty things about other drivers. We find vending machines and eat bad snacks. We count airplanes overhead, every day.

I frequently write about Schuyler as a child with a disability because that's the thing that we struggle with the most, and the thing that speaks to a larger community the most clearly. But it's important to understand that the experience isn't hard because of her. It's hard because of the world. It's hard because society requires her to fit, in a way that she doesn't do easily, and while I would love to change the world, that's not ever going to happen, not to the extent that it should.

I can't change THE world, but I can try to change hers, to build a space around her where she can exist on her own terms, at least enough to regroup and recharge before she goes back into the fray, back into a land of passing, of trying to fit, and of trying to hold her head up while a dumb world expects her to apologize for being a beautiful freak. I can try, for as long as it is within my power, to see that she doesn't fade away.

Schuyler needs to be enabled. She needs to be given tools to communicate, options for freedom, opportunities to love and be loved. Schuyler could be an amazing big sister to someone, and she is easily the very best friend that anyone could have if only they would ask her to be. Given the right environment, Schuyler will thrive. She will grow wings and she will fly away, far from the doubters and far from these who would limit her and diminish her value and her humanity with their lack of vision.

And far from me one day. I hope that she can, even as I hope she never does. For like every other dad since the beginning, it is the fate of this father's heart to be broken, in ways I could never see coming, and could never, even in my most selfish moments, ever deny my beloved monster. 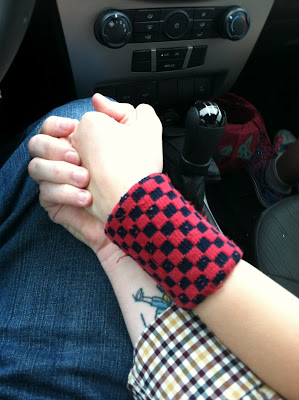 Today's Support for Special Needs post discusses the phenomenon of nomad parenting. But more than that, it talks about how that concept affects my own family. In the past, and yes, in the future.

If you're one of those people who never clicks through to read what I've written over at SfSN (and believe me, I understand the strain that extra click places on you; I am up late every night, tortured with guilt over the legions of carpel tunnel sufferers that I have no doubt created), here's the piece that might surprise you. We are looking to move to the Chicago area, hopefully within the coming months. We have our reasons, some of which I discuss in the piece that lies behind that brutal extra click, and some of which are personal.

I'm looking for a job. This is a little daunting because 1) I have a job now that I quite enjoy, and 2) my resume is a little… weird. It certainly makes searching for new work to be a challenge. So if you live in the Chicago area and either know of job possibilities or are a mighty hiring captain of industry yourself, please let me know. I've been shooting resumes into the internet void for the past week or so, and I'm starting to feel like one of those SETI scientists who monitor deep space radio waves and wait in vain to hear from aliens who want to be our friends. Or, you know, give us jobs. 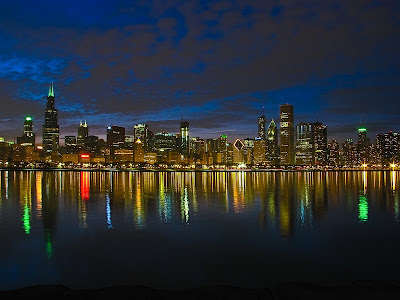 The Future is its Own Kind of Monster

My latest post at Support for Special Needs discusses how the end of the school year means facing the future, and how for those of us with kids with disabilities, looking into that future can be pretty disconcerting.

In other news, Schuyler finally got her year-long dream over the weekend, which was to color her hair blue. Except it didn't turn out blue, not even close. She was disappointed (How many little girls dream of having hair that is gunmetal grey?), but it grew on her. I knew we were going to be okay when she looked at herself in the mirror, paused, and then said "I look evil!" 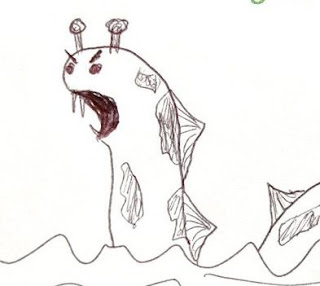