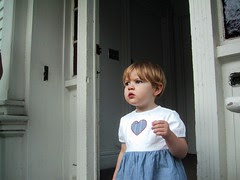 Small Chubbin, 2002
Originally uploaded by Citizen Rob.
As I dig into the writing of this book, I'm finding that the hard part isn't necessarily revisiting the hard times. I'm doing a major re-write of the earliest chapters, so I'm back in New Haven of 2000, with a weird job in a mental hospital and a new baby. I'm revisiting those days in my old journal, and the fact that I had no idea what the future held for us all is surprisingly poignant to me.

It's funny the things I was afraid of as a new parent. None of them came to pass, and yet the monster was there, already in place and fully formed. It would be July of 20001 before Schuyler's pediatrician would ask about Schuyler's speech for the first time, and another two years after that before we ever heard the words "Congenital Bilateral Perisylvian Syndrome".

In 2000, I thought our parenting future was just like everyone else's. I thought things were going to be okay.

Between now and the end of the year, I'm going to be revisiting the slow descent into the very worst of those days, all the uncertainty and the wondering if Schuyler was deaf and hearing the idiotic term "Pervasive Developmental Disorder - Not Otherwise Specified" for the first time. I'll get to hit rock bottom in the summer of 2003 when we finally met the monster, and a few weeks later, I'll get to plummet back down to a year and a half later when we went to Chicago to look for hope and instead found out that as bad as we thought it was, Schuyler's monster was even uglier than we'd been told.

If I progress on schedule, sometime in November I'll be back in Austin circa spring of 2004 learning about the Big Box of Words and fundraising for Schuyler's shot at having a voice. December will bring the fight, and the hope, and by the end of the year, I should be done.

Where Schuyler is concerned, I sometimes get so caught up in trying to prepare for the future that I sometimes forget that the past was no picnic, either. If I could go back in time and talk to the me of 2000, I'm not exactly sure what I'd tell him.

Email ThisBlogThis!Share to TwitterShare to FacebookShare to Pinterest
Labels: schuyler, shepherds of the broken, the monster

This just kind of makes my head explode. I so often think what it would be like to be able read my favorite books again for the first time. (As Rhys mused about earlier this summer.) I can't imagine what cognitive dissonance it must be to visit yourself before you knew.

Also, that's an exceptionally cute Schuyler picture. She looks appropriately skeptical of this whole "world" thing. "What is that? And why isn't it mine yet?"

How about "don't underestimate the power of a village; the internet is your village"?

Also mention that it will be worse than you think, but it will also be better, a million times better.

And you make an excellent point about what Rob's experiencing...it's almost like time travel, going back to visit the 'before' you. Yikes. potentially traumatizing, potentially elating, but cool.

The question is would you tell your past self everything you know now? I think sometimes we cope because we simply don't know - we just survive.

That is such a cute picture of Schuyler she is just pure sweetness.

I've been trying to go back over the archives, to find out what life was like for you back then. But with no access to anything before Darn tootin', it's rough! When you gonna have the rest of that back up? I want to read about you back then (before the book comes out!)
Not that I'm demanding anything, as I know you already have plenty of demands on your time. Just a pleasant request. :)

Darn Tootin should be back up soon if it's not already. If you go to CitizenRob.com, other old stuff should also be available soon.

i've only known you the last year or so---i will be interested to see what emotions this dredges up, and what details, too.

When you get your archives back up, how about posting an edited version of the movie "I just want to go with you..." The nature walk at the end is priceless.

Not sure what part you're talking about, but I'll post links to those movies on the blog. That particular one is right here.

Message to the "you" of 2000? Sometimes you really can make lemonade out of lemons.

Do you still have the one with "My Heart Belongs to Daddy?" I'd love to see that again.

The first movie introducing Schuyler doesnt want to play properly - I have sound but no picture. The others work.

Rob, I love these movies. Thank you for sharing them.

Wrong title maybe - I meant the movie where you encounter the rare African crap-headed duckage, and Schuyler signs turtles and trees.

there's not too much more else to say but wow, but it's more like a woah. i'll remember to buckle myself in the next time i come back.

hang in there man and i hope it's not too hard reliving it all.

Rob, I have a question: in your journal and current blog, Julie is pretty much a shadow figure, and I remember your saying this was at her request. In the book, will she take her full place? Curious, as a mother - have always wanted her take on things as well, but I understand her choice to remain private, too.
K McCall

The book will focus on my relationship with Schuyler, but Julie will be a bigger presence than she is here. She's still concerned about her privacy, and I also don't presume to tell her story, but she'll be more present in the book.

I wish she'd write her own story, or a chapter or six. Odd, but she's such a shadow character. Of course, it's odd to read some stranger's journal for years, to begin with.

May your muse stay constant throughout the writing - may it be as easy as it can be. ;)