Okay, so let’s get this out of the way first. I was wrong. I was very, very wrong.

A few years ago, I wrote a blog piece about something I saw online, a photo of a group of speech language professionals seated around a table, communicating with each other using AAC devices. To my reactionary eye, the photo was troubling. It felt like just one more exercise for able-bodied people to “get” what it must be like to have a speech disorder like Schuyler’s. It looked bad to me in part because I was seeing it linked on the Facebook page of an AAC company, which felt unseemly to me. Worse to my eyes was the fact that they seemed to be having a lot of fun. My indignation raced out ahead of my brain.

I posted a blog entry with my observations about what I perceived to be an ill-conceived stunt, and it lasted maybe half an hour online before my editor contacted me. She was getting pushback from the therapists in the photo, she said, and while she was willing to leave the post up, she wanted to give me the opportunity to choose its ultimate fate. I did what I should have done before tapping out a single word; I reconsidered my snotty position. And then I removed the post.

Last week, Schuyler and I joined those same speech professionals, including Lindsey Paden, original developer of what came to be known as the Chatterbox Challenge, and we participated in an identical session.

And it was fantastic.

Turns out the Chatterbox Challenge, which you can read more about here, isn’t about sympathy, and it’s not about being inspired or showing off the technology to the world or raising awareness or anything else like that. The object of this immersive language exercise is simply to promote familiarity with the language system and the strengths and inherent challenges involved in communication with AAC. The goal is nothing more or less than to become better at prompting and modeling AAC systems to our kids and our clients. (None of this was a secret back when I wrote my ill-advised blog post, of course.)

As a participant, I learned a great deal. I saw how in order to keep up with the flow of conversation, quick steps and approximations were often necessary, (Someone asked me how our trip from Texas had been, and I ended up answering “We had a good flying,”, because those were the words at my fingertips and it told the story just fine.) I understood in a more visceral way how the delay in producing conversation via AAC can silence a user, and how increasing the speed of speech production was vital, much more so than accuracy. We learned stuff, and God forgive me, we even had a little fun, too.

So there you have it. I was wrong all those years ago, and to anyone who read that original post or who felt criticized by it at the time, I am officially apologizing, both for being so wrong about you, and for being kind of a dick about it.

Glad we got that out of the way. Moving on.

In looking back over the past few months, or even really the last year or so, it feels like we’ve been in this truly transformative period, in Schuyler’s life and also in my own. High school graduation, the PMG conference, Australia, and then her internship, all of these things have rolled out for her like a production line of change. Schuyler has never been much for routine, but still. It’s been a lot, and it has left her feeling a little swept off her feet. Not in a bad way, but still.

After the ISAAC conference in Australia, we were invited by Lindsey to come to her workplace, Bridgeway Academy in Ohio where she serves as Director of Therapy Services, in order to share our story and our observations with that community. For Schuyler, and for me as well, this also presented the opportunity to get to know people who were already becoming important in our lives. When we left, it was with our scope of family greatly expanded. That’s not a small thing, not for either of us.

Bridgeway Academy’s stated mission is to inspire the potential and celebrate the ability of every child. That sounds lofty, but when we visited, we got to watch how that works up close. It really is extraordinary to see talented, compassionate people in their element, and to watch the results of that good work bloom in front of you. By the time we presented last Thursday, I wanted very much to impress these people. I hope we managed to do that, maybe just a little. 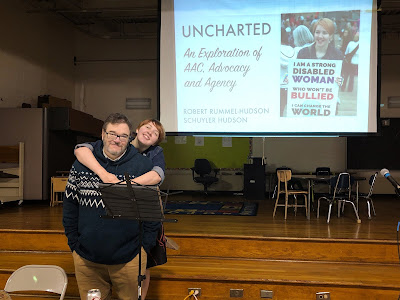 As for Schuyler, she represented herself with poise and style, and once again I couldn’t be more proud of her. She’s becoming a good self-advocate, and she’s getting a better idea of what she wants that to look like in the future. Not just for herself, really, but for those like herself “with little monsters of their own,” as she said in her presentation. I could see her working someplace like Bridgeway one day. I can imagine that very easily.

“As a writer, I hate to admit this,” I said in my speech last week, “but our biggest moments usually defy description. The relationships and experiences we make in the course of our lives define the paths we take into the future.

“We’re all just little frogs trying to cross the swamp,” I continued, “and there are alligators and snakes waiting to gobble us up, to be sure. But there are also lily pads. We search for the ones that will support and sustain us, and that’s how we find our way.”

In recent months, we’ve found some crucial lily pads, and our lives have been enriched beyond measure as a result.