A Short Ride in a Fast Machine

There’s a dream I’ve had repeatedly in my life, including quite recently. In this dream, I am driving down a long, remote West Texas road at high speed, with no other cars around me. I’m going fast, in that way you hurtle forward on a desert highway when the perspective tricks you into picking what feels like leisurely pace until you look down and you’re doing ninety miles per hour. The sun is setting, the sky exploding in reds and oranges and a deepening purple.

Suddenly, without warning or drama, the wheel comes off in my hand. I’m holding it, gripped with panic, as the car continues down the road. I hit the brakes but of course they do nothing. In my dream, I know they’ll be unresponsive before I even touch my foot to the pedal. The car rockets down the road, still following its straight line, but with no indication of what’s to come. That’s my dream, and it’s almost embarrassingly transparent, but then I guess my dreams have never been subtle.

The past few weeks have followed a disquieting theme. Last month, one of my very best friends from Interlochen died, out of the blue on the other side of the world. He was young, forty-five, an esteemed musician who was apparently universally beloved. He was handsome and fit, he looked like Captain America, for fuck's sake, and in a horrible instant his heart, that most unreliable of organs, turned on him, and he was gone. Just like that. His sudden death was inexplicable at the time. It remains so today.

Last week, a friend from high school was also suddenly taken, also by an uncooperative and unforgiving heart. And last night I learned that the first band director to ever hire me as a low brass teacher back when I was in college died over the weekend. I guess I’m at the age now where I have more funerals than weddings in my future. It’s not a trend I’m enjoying.

Through it all, I live.

Tomorrow is my birthday. I’ll be fifty-two, assuming I make it through the rest of the day today. (I like my chances.) Fifty-two is an age my poor wretched father never got to be, and honestly, there were times this past year when I felt like I might miss out as well. But I’m here. I live. My own problematic heart keeps showing up for work and powering me through. Every morning I get out of the shower and catch a glimpse of myself in the mirror, with this ugly scar that’s much less daunting than before, but which still tells a story I’m not sure I understand--not after losing my friend. How is he gone and I’m still here? I’m not sure it feels unfair, exactly. It just doesn’t seem to make sense.

I started running a few months ago, with the encouragement of someone who is entirely uninterested in attending my funeral. I never thought I’d be a runner, and to be clear, I’m a terrible one. I lurch forward like the undead, slowly and gracelessly, and I only emanate real joy when I collapse at the end. But I finished a 5k in September and am planning on more. Every time I step on the road, it feels like both an encouragement to my potentially murderous heart, and a defiant gesture. Come on, motherfucker. We’re doing this. 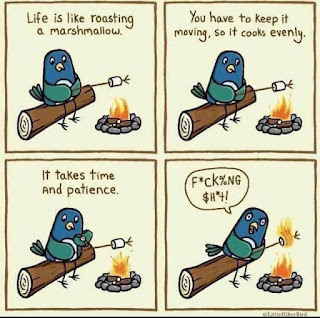 The past nine months (has it really been that long?) have felt as chaotic as any point in my life. And yet, I’m not sure I feel like the wheel has come off in my hands, not exactly. I don’t know, maybe it has, but with the possibility that veering off the road might lead to something surprising and fulfilling and not just a fiery death. It’s certainly true that the wheel hasn’t just come off in my hands. I wrenched it from its place, with purpose and selfish abandon. If I do hurtle off a cliff, I have no one to blame but myself.

Through it all, the primary thing in my life that has given me purpose remains the most important part for me, and it’s also the most chaotic. Schuyler remains, and she moves forward into a future that is now very much her present. If my future is unsure, if it’s to be glorious or a cautionary tale, a lengthy journey or a short ride in a fast machine, that life is always going to have her at the center of it all for me. And that’s something I draw a great deal of comfort from.

Schuyler turns twenty years old next month. Stop for a moment and consider the unlikely sound of those words. Some of you have been reading since before my book and even before her diagnosis, all the way back to the beginning. You’ve been reading this story for twenty years now. I assume you’re starting to feel some aches and pains in your bones now, too. 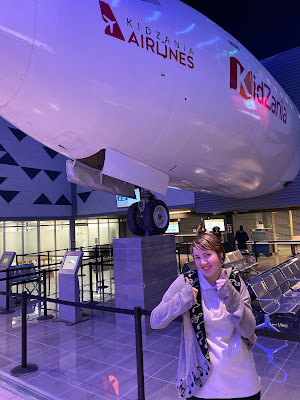 After ending her internship and briefly working at a hobby store in a position that turned out to be an almost cliched example of what disability employment looks like to far too many people, Schuyler interviewed at and was immediately hired by a place called Kidzania. Follow that link, and imagine a place where kids 14 and younger get to explore their possible futures in the most over-the-top and ridiculously fun way possible. It’s as if Willy Wonka changed jobs and became a career guidance counselor.

Schuyler moves through this new world with a skill and a grace I frankly worried she might not ever possess, to my deep shame. She communicates verbally now with a clarity that belies the years she spent modeling with speech tech and working with speech language pathologists. She makes choices that are good ones; smart ones. At Kidzania, it was her suggestion that they spell her name “Skylar” on her badge so that the little kids she works with will have an easier time with it. Most of all, she’s handling some tough family stuff with maturity.

As I told her last night, I always wondered about the adult she would one day become. And she has turned out to be exactly the young woman I always hoped she would be.

The future is as uncertain as it’s ever been, for me and for Schuyler and for the people we love around us. But I’m going to dare to hope that it’s going to be okay. I’m believing in that, and willing it with all the energy I possess to be so. 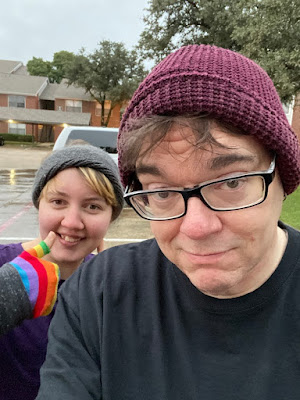