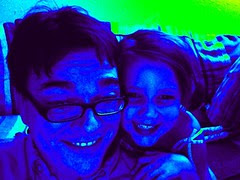 Blue Man Group
Originally uploaded by Citizen Rob.
First of all, an announcement. The Last Samurai is on tv right now, and it's on the scene where the samurai are attacked by assassin ninjas. Schuyler has just informed us that she is a ninja. She is showing us her ninja moves right now.

Just so you know. She really is my pretty ninja. She'll mess you up, bitches.

As you can imagine, it's been a crazy week. I never really thought the whole hypothetical experience through, what it would be like to get a book deal. I guess if I imagined it at all, my fantasy scene would have been similar to winning the Publisher's Clearing House Sweepstakes, like I'd get a knock on the door and guys in suits and giant toothy smiles would say, "Robert Rummel-Hudson! We're buying your book! Sign here and you can have this big fancy check and a spot on Jon Stewart and all the hot undergrad English majors you can handle!"

The reality is that after a week of emails and phone calls and questions about deadlines and percentages and marketing and publishing terms that I had to look up online (before answering the same thing every time: "Sounds great!"), the process is still, well, in process. (Yeah, that was an eloquent turn of phrase from the fancy pants writer.) I suspect the next few days will bring some closure, and with it perhaps the giant check and the hot young chickies.

And then I have to finish this thing. I have until the end of January to turn in a finished manuscript, and I've mapped out the amount of time I need to complete it before the end of the year, giving me a few weeks to pretty up the mess when I'm done. It works out to about a chapter a week. As a fun little online component of the process, I'll list the name of the chapter I'm currently working on over in the sidebar. If you don't see it change once a week or so, you have my permission to send me an email that says "What the fuck, Chuck?"

Through it all, life continues. Schuyler continues.

I have to admit, this has been a slightly bittersweet experience. For as long as I can remember, I've wanted to be a published writer. It's been a consistent dream of mine, but now that it's coming true, it feels a little bit like a monkey paw story. (For those of you with a clicking allergy, the reference is to a 1902 story by W. W. Jacobs, in which a dead monkey paw grants wishes but with an ugly price.) I've been in such a celebratory mood all week, but when I sit down to work on the book, the reality of this story blows through my mood like smoke.

I'm thrilled that this book is going to be published. Well, of course I am. Part of that thrill is the weird rush of a life's dream coming to pass, like the first drop of a roller coaster. Part of it feels like a small measure of justice for Schuyler, as if God can do this to her and I'm powerless to stop him, but at the very least I'm going to let the world know what a bully he is. And part of it has the whiff of evangelism, bringing her story to people who might have some kind of monster in their own lives. Schuyler's an inspiring kid, she never loses her spirit even when we do. And make no mistake, we do, a lot.

In the end, as much as I'd like to play the part of Talented Author Type, the reality is that this book is getting published because of Schuyler. She's writing her own story, she's going to make her own way and knock down whomever she has to in order to do so.

Email ThisBlogThis!Share to TwitterShare to FacebookShare to Pinterest
Labels: schuyler, the book, the monster

I think those of us who read this have been sharing your dream with you (but I wasn't expecting any young honeys out of the deal).

I've only been reading for about six months, and haven't gotten through all of the annals of Rob history yet, but I was almost as excited for your book deal as I would have been for one of my own.

I'm very sure that after all the dust has settled, the manuscript is in, and everything is in line, it will all be worth it. For you and for Schuyler. And everyone who gets to share a little piece of the experience with you.

I'm so thrilled about the book, I want to preorder it already!

Seriously, the first time that chapter thing hasn't changed over exactly seven days, I'm just sending you ten What the fuck, Chuck? emails just because I think it's hilarious.

I quote Almost Famous: "It's all happening!"

P.S. I'm relieved that someone else thinks His Holiness is a bully.

I'm very excited about your book! It's reassuring to know that sometimes the right person IS really choosen to speak their mind, and share their story. I think it's well deserved! Will the pictures in the book be your originals?

I know that you are telling Schuyler's story in a most compelling way. As for me, I'm buying copies for everyone I know- I'm saving up now because I think, from what I've read, it's going to be a phenomenal read, inspiring story, and (hopefully) a bestseller. (And you are most assuredly worth $25 a pop. More, even.) If The Devil Wears Prada can be a bestseller, Schuyler's Monster deserves no less than the Pulitzer.

No monkey paw needed- you didn't wish for this. You worked hard, wrote your ass off, found an agent and got your deal. Now you get to work it and see it through to fruition.

May this book open doors you never knew were there- for you, Julie and Schuyler.

You need to find a Japanese video store and rent your daughter some real ninja shows. I remember watching Japanese TV in Hawaii(in the 80's) and they had several ninja themed shows. Lots of fun to watch.....look for the ones with Sonny Chiba in them.

Oh, Rob. I'm so sad that out of all the beauty in Schuyler you still believe that God is your personal bully. That's like saying that you are a bully to your own child when she falls or gets hurt or sick under your watch. You can't prevent those things. You can try. But you CAN be there for her when they happen. And you are. God is no different.

If you believe in God, then who did this to her, and to all the kids out there who are broken? The devil?

I hate to be so blunt, but as far as God and Schuyler is concerned, he needs to either help her or get the fuck out of the way.

I'm with Rob on this - I don't subscribe to the whole "God does everything for a reason " bit. I refuse to beleive that anyone/thing would chose these things for another living being simply because its their "will". If there is a God he sure has some explaining to do...

Sorry Rob about the angst in the midst of such happy events but there is no way someone is going to say "but God loves you, he has a plan yada yada yada" and try to make you feel wrong without someone like myself (and I'm sure hundreds of others) becoming defensive on your behalf (not that you need us but always know we are here)

I watch your life from a distance like everyone else, you have made it your own. No one else knows what you go through, therefore no one has the right to judge you.

Sorry again for the downer, I really hope everything is going well for you. Waiting impatiently for 2008!

God does help Schuyler...every day that you and Julie comfort her, guide her, teach her, hold her, love her...He does help her through the generosity of those who answer the call when Schuyler has a need that is tough for you to afford. Just because Schuyler has challenges that others don't doesn't mean she is forsaken. She is different. She is, in every sense of the word, special. We all have our struggles.

And, for the record, I do believe that it could have been the devil who threw this roadblock in your driveway, to keep you from believing in a loving God (that is what the devil does best). Or it could have been a fluke of nature that God thought only you could handle for one reason or another. Simply put, there are two sides to every story. Schuyler's illness does not invalidate the love of God any more than my nephew's cancer or my aunt's brain tumor's invalidate the love of God.

BUT...no matter what you believe I don't mean to argue for arguments sake and I hope you will know that I respect your belief. I just ache for you at times and now that I've spoken my peace and I know that you know that, I'm done. Sorry if I offended...God knows you have enough to carry right now.

At any rate, you and Schuyler, and Julie, are blessed. I know you know that, though.

Well, I disagree almost completely, but I appreciate your positive thoughts nonetheless.

She's writing her own story, she's going to make her own way and knock down whomever she has to in order to do so.

Me? I'm just writing it down.

I'm so glad for y'all. You deserve all these wonderful things, plus cookies.

And I'm looking forward to Judgment Day, when we're standing up there in the line (I hope I'm near y'all) and when the Big Fella says, "All right, boy, what did you do?", you can thrust the book up His nose and say, "Dude, this is how we handled it. This is how we turned the Monster You stuck my baby with into something useful and positive. Look at the amazing person she is. Look at the people she's helped. And You, Sir, frankly, can now suck my big foot."

And then Schuyler can ninja-kick Him and cuss Him out really good, if she wants.

And then He'll hug y'all really really hard and say, "I'm sorry. I suck. I do. Seriously. You can spend eternity ninja-kicking Me, if you want, Schuyler. But y'all do come on in the house and relax. Y'all are just amazing."

(Sure, I know that's juvenile, but it's the only way I can get my head around it sometimes: God will tell us He's sorry for what's happened and hug us and tell us He's proud of us and then let us punch Him a good one. I like to think that's what His boy did when He got back home, you know.)