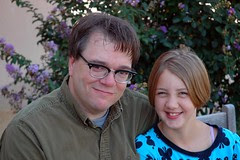 Heathens at the gate
Originally uploaded by Citizen Rob
I delivered the sermon at a church on Sunday.

Okay, I know. But that's not as unlikely of a statement as you might think. I spoke at the Community Unitarian Universalist Church of Plano, so this isn't like, you know, that other time. Unitarians are a pretty accepting bunch. As one of them said to me after the service, "There's a saying that Unitarians are just Agnostics who have kids."

I delivered a sermon, recited a short excerpt from the essay I contributed to My Baby Rides the Short Bus and even read a story to the kids. (A Bad Case of the Stripes, by David Shannon) Everyone was exceptionally nice, I had a lot of very interesting conversations and no one made the sign of the cross or spoke in tongues before running shrieking from the room. It was my first time in a church in longer than I can remember; even my wedding took place in a university chapel, not an actual church. I felt very comfortable there. We might just have to go back for a visit one day.

If you're interested, both my reading and the sermon (which was really more of a speech) are available online at the church's sermon archive.

Immediately after I spoke, the congregation sang what I realized was a very specifically chosen hymn, "We'll Build a Land", that I wasn't familiar with, despite my years of playing church gigs as a semi-professional trombonist. I did a little reading and discovered that the words come from Isaiah and Amos (also the source of Martin Luther King's famous citation "Justice shall roll down like waters, righteousness like a mighty stream").
The hymn is quite simply a call to action. It invokes the same sense of community, of "the village", that I've been speaking about in every speech I've given since my book came out. It doesn't rely on God to make things right, but rather calls on all of us to bring peace and justice to the world. I think Jesus taught the same, not that God would come down and clean up our crappy, angry world for us, but rather that we should live lives that lead to righteousness. We have to take care of each other, and of the afflicted most of all.

Come build a land where sisters and brothers,
anointed by God, may then create peace:
where justice shall roll down like waters,
and peace like an ever-flowing stream.

We'll be a land building up ancient cities,
raising up devastations from old;
restoring ruins of generations.
Oh, we'll build a land of people so bold.

Come, build a land where the mantles of praises
resound from spirits once faint and once weak;
where like oaks of righteousness stand her people.
Oh, come build the land, my people we seek.

Email ThisBlogThis!Share to TwitterShare to FacebookShare to Pinterest
Labels: local news, my big opinions, robly matters, schuyler, shepherds of the broken, the book

I wrote a little somethin' somethin' over at Support for Special Needs, on the topic of marriage and special needs families. Perhaps it's odd, the fact that I was asked to write about an aspect of life at which I have frankly not exactly excelled, but you should never underestimate the power of a solid cautionary tale. I share because I care.
by Robert Hudson at 9:11 AM 14 comments:

Email ThisBlogThis!Share to TwitterShare to FacebookShare to Pinterest
Labels: internet crap, my big opinions, robly matters, shepherds of the broken 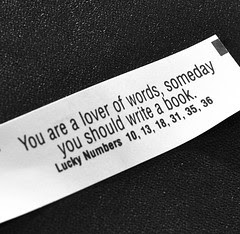 Smartass fortune cookie
Originally uploaded by Citizen Rob
Schuyler and I are heading back to Odessa, land of my misspent youth, to speak to a book club and visit the fam. Weirdly, this is actually the first book-related thing I've done back home. We'll see if anyone caught that part about "Odessalation" or "Slowdeatha".

A possible added bonus? I might just be playing my trombone in a public place for the first time since the Clinton administration, at the Summer Mummers in Midland on Friday night. We'll just have to see how tragic I sound. It might not be pretty. Well, I think I can pretty much guarantee "not pretty".
Entertaining? Well, in a NASCAR burning-wreckage-flying-into-the-stands sort of way, sure.
by Robert Hudson at 7:44 PM 4 comments: