If you've read Schuyler's Monster, you may remember the opening scene, the meeting with a neurologist at Yale at which we received Schuyler's Polymicrogyria diagnosis. In that scene, I described the feeling this way:

At the time, when friends would attempt to comfort us by saying that at least we had an answer, at least we knew what the problem was now, I explained how it felt. Imagine walking through the woods at night, all alone. In the darkness behind you, something is following, stalking you. You can hear it disturbing the leaves as it moves, and while it never goes away, it remains hidden from view. In your mind, you wonder. What is it? A feral dog? A coyote? Or even a mountain lion? Your imagination kicks into high gear and your mind conjures up the most likely explanations. Suddenly you stumble into an open area bathed in moonlight. You step to the center and turn to see what is following you.

The bushes part, and out steps a Tyrannosaurus rex.

That’s how it felt, this answer to Schuyler’s mystery.

We've lived a lifetime since that day. That's almost literally true. Moving back to Texas, Schuyler's entire experience with assistive technology, every moment of her school life, a book and all the advocacy that sprung from it, the best and the toughest moments of a marriage and parenting partnership that didn't ultimately survive, every day of Schuyler's life as a Texan, every seizure she ever endured, every band performance she ever participated in, a pandemic and a move across the country, and our transition to new life and a new chance at happiness with a stepmother who adores her (and me, I like to think), ALL of this has occurred in the space between this moment and that beautiful, horrible afternoon in New Haven eighteen years ago.

Schuyler has lived a life that has been sometimes wonderful beyond description and at other times difficult in ways I can never fully grasp, and she's still just getting started with what that adult life will look like. But eighteen years ago, we met her constant traveling companion, the thing in her brain that she always called her little monster.

I struggled to accept that reality at the time. I struggle with it to this day, as does Schuyler. As do we all. 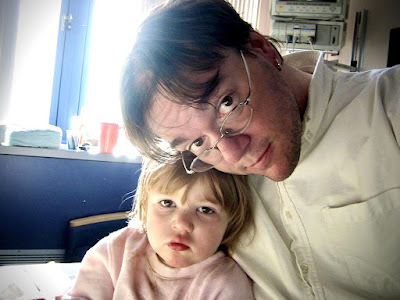