She sees her future work life as an abstraction, probably because at her age, the future seems limitless. She believes that whatever she's going to do with her life is a choice that is firmly in her hands. But for Schuyler, and for kids like her, that future may not actually have that many options. 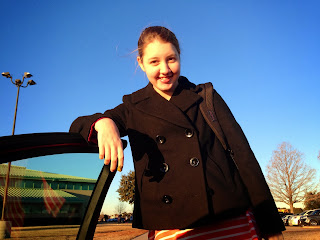 After Schuyler's most recent visit to her neurologist back in December, we were given a cd with images from her MRI. In what felt like a flashback to 1995, the cd wouldn't open on our Mac, much less the app that displays the images. We picked it up during the holiday break, so I couldn't take it to work and try it there. We'd already received the pertinent information from Schuyler's neurologist anyway, so there wasn't really anything to be learned from seeing the images. By the time the holidays were over, the cd sat on my desk, patiently waiting for me to remember to bring it in to the office with me.

It ended up waiting until this week.

It brought the cd to work with me, along with Schuyler, who had the day off from school. It was President's Day, an important national holiday which she celebrated like a serious citizen by bingeing on unwatchable Disney Channel programs on her iPad and eating all the snacks in the building. As she sat in my office with her iPad, I stepped down the hall and had a friend open the MRI viewing app on her PC.

And there it was, again. Schuyler's brain, ten years older but still looking, you know, brainy. There were two different versions of the scan side by side, one presenting as bright features and high-contrast regions, and the other more subtle, showing the details of her brain, the folds and the blood vessels.

Even at a glance, as I watched the layers go by, I could see the thing that has bedeviled my daughter and shaped her world and her perception of that world since before she was born. Slightly behind her temples, on both sides. It was faintly visible on the more subtle image, but stood out as a white featureless area on the other, in contrast with the rest of her brain.

I texted Schuyler and told her to come to my friend's office. When she walked in and saw what was on the screen, her eyes widened. She knew what it was immediately.

"My brain?" she answered.

"Yep, that's your brain. And what's that?" I asked, pointing to the two bright regions on the sides.

She hesitated, and then said "My little monster?"

She was both fascinated and a little grossed out by the images, especially as we moved through the scans. ("Look at your eyeballs, Schuyler! Look at your teeth!") She watched for a little longer and then went back to her crappy tv shows, her curiosity satisfied.

I have to be honest. I could look at those images all day. Not for the information they contain; we'd already gotten a rundown of all the news, which wasn't all that much anyway. But exploring the physical reality of Schuyler's brain is to tangibly experience a place that has been the center of our family's universe for the past decade, but in a largely metaphoric way. It's not just Schuyler who sees her brain as a mysterious but cool place where a tiny monster lives and throws chaos into her path now and then. To actually see that place is a little like getting satellite photos of weather patterns in Middle Earth.

It's easy to forget that all the challenge and all the wonder of Schuyler, the parts that are broken and the parts that are inexplicably working anyway and the things that are the perfect center of my life, it's all there, in that little ball of meat and electricity. Just a simple thing, and yet the most complex organic structure in the world. For Schuyler, more complicated even than most.

Schuyler's brain is malformed, and significantly so. It has changed a little, but not in a way that concerns her neurologist. The regions affected by her polymicrogyria remain essentially unchanged since 2003, as they will remain unchanged for the rest of her life. Those parts aren't doing nothing, and much of their impairment seems to have been taken up by other parts of her brain. But how that rewiring happens is a mystery. Schuyler's original doctor admitted that where the brain is concerned, even the most advanced medical giants in his field were not much more knowledgable than ancient village shamans. We know what Schuyler's brain is doing, but we have no idea how.

Schuyler's brain is where her monster lives. That's what she says. She embraced the metaphor from the title of my book, and she took it to heart. She imagines her monster, tiny and bug-eyed and fierce, sitting in its little comfy, overstuffed monster chair, and it watches her. It pushes buttons on its big monster console and creates the fog that impairs her thinking. It presses another button and disengages clarity in her speech. It pulls a lever and conjures earthquakes now and then. She doesn't like her little monster, and on the hard days she comments that it doesn't like her, either. She never says she wants the monster gone, however. She accepted long ago that she and her little monster are going to be engaged in this uneasy, awkward dance for the rest of her life.

Schuyler's brain is where her world is constructed, like a template that sits atop the boring one the rest of us occupy. Her world contains big monsters, too. Some of them consist entirely of shadows that only she can see, with the aid of her special goggles (left over from her Amelia Earhart costume from a few Halloweens back). Her world is one in which lights passing overhead in the night sky might belong to airplanes, but are just as likely to be part of a spacecraft bringing aliens to our midst. It's a world where her father might just be a werewolf, which suggests that as my daughter, she might just have some howling and adventure ahead for her as well. Schuyler isn't delusional; she understands that these are constructs. But even now, she brings her world of play wherever she goes, and the invitation to visit her there always stands, for anyone willing to put on a pair of monster hunting goggles and join her.

Schuyler's brain is a place full of contradictions. In that brain, the people she meets are potential friends, and she constructs those friendships mentally long before she makes them. But that brain has a difficult time building those friendships, and so she stumbles, is socially awkward, because she doesn't quite know how to bridge that gap, the one that her monster excavated and the one that she probably just comes by naturally, too. Schuyler is both boisterous and shy. One day she'll make some forever friends. One day she'll find that forever boy, or forever girl, and when it happens, it'll be because that person will see Schuyler's worth, and so he or she will do the work that comes with communicating and negotiating and working out the mysteries of Schuyler's brain.

When I look at the pictures of Schuyler's brain, I see a universe contained inside a perfect little girl's head. And I see the very center of my own world. It's a puzzle and a perfect vacation spot and a remarkable learning lab and a battleground. When I think about that brain, in all its corporeal mass and its indescribable spiritual vastness, I can only say that I love it, with its imperfections and all its beauty and its immeasurable possibilities. It is in fact my very favorite place in all the world. 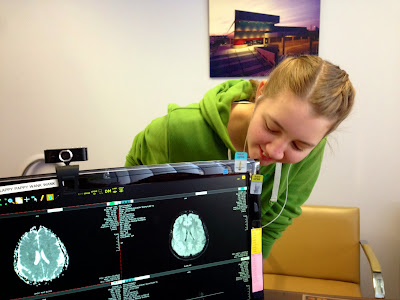 
As parents of children with disabilities, we are constantly looking for the word choices that reflect not just our kids’ reality, but also the dignity and the hope and the possibilities that we hold as a kind of sacred trust. 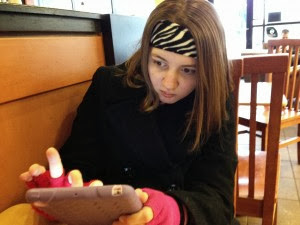 by Robert Hudson at 1:20 PM No comments:

I'm sorry if you're getting tired of this story. I actually wrote this last week. One of the pitfalls of a weekly column, I guess. Anyway, today at Support for Special Needs:


But being Schuyler’s father has also shown me, again and again with stark clarity, that there really are monsters in this world, and some of them smile pretty smiles and take your daughter by the hand if you let them, and God, do I hope I’m alert enough to know those monsters when I see them. 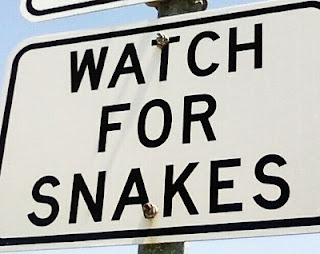 
My fears for that future, and they are legion, have little to do with what Schuyler will be able to do, or what her worth to the world might be in measurable values. My fear is rooted squarely in those who hold her future success and those of her friends in their hands, and whether or not they truly understand the value of what that means. 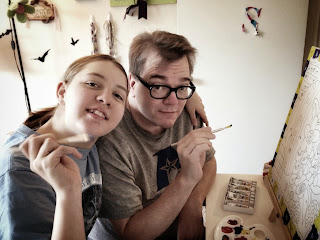 by Robert Hudson at 1:43 PM No comments: