Just One of Those Things

Last week I had a heart catheter procedure, to measure the amount of blockage in my shitty, shitty heart and possible put in a stent or two. Put them in, send me home, back to work in a day or two, right?

That’s not what ultimately happened. No, I’m going to have open heart bypass surgery. Well. I didn’t see that coming.

Tomorrow afternoon, I meet my heart surgeon, hopefully to get this thing scheduled. I’ll meet the man who will literally have my life in my hands. So, you know, big day.

I’ll admit it, I’ve been in a weird, unpleasant emotional place ever since I found out where this whole thing is heading. I’ve been thinking about the future but also trying to shake this sense of dread, this sense that the future might not be a thing for me. Like maybe I prematurely celebrated outliving my father, who has become a very unquiet ghost indeed. I want to believe in that future, more than anything. And I know this procedure has like a 95% survival rate, but as one person recently pointed out, someone’s got to be in that five percent.

I’ve had this guy sitting on my desk in my office for months; he’s probably my favorite monster. Warner Bros. calls him Gossamer, but once Schuyler pointed out that he looked like an angry heart, he became my representative Shitty Heart Monster. My feelings about him are also complicated; he’s trying to hurt me, but I obviously have high hopes for him and his future, which is my future, too.

I’m giving him to Schuyler when I go in for my surgery, and she’ll take care of him until I come out. It’ll be easy, I keep telling myself. A trip to the moon on gossamer wings, as Cole Porter said. 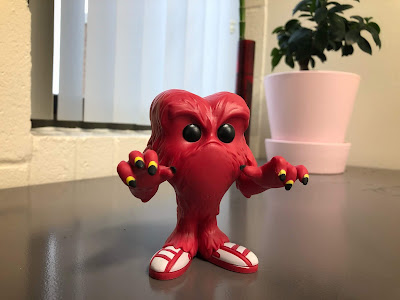