I feel like the oldest old man in Old Man Town. 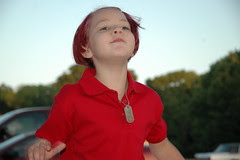 Losing her mind for the bus
Originally uploaded by Citizen Rob.
Yesterday was Schuyler's first day back in school. For those of you who have been reading for a while and would like to feel the tread of Father Time's birkenstocks as he walks over your face, she is entering the first grade.

My first thought was, "That's weird. When did they start accepting babies into the first grade?"

So yeah, I'm clearly in denial.

It was a strange day for Schuyler. This was her first day in the new school uniform, which looks sharp on her if I do say so myself, and I do. It was also mostly an orientation day, and not the only one. Her box class wont actually begin until next week, so she's spending these first few days as a mainstream student. I'm both nervous and curious to see how that works out.

A boring story, I know, but it has a dramatic conclusion. The bus that was supposed to bring her home after school was running late, so Julie called me to tell me and then called the transportation office.

And that's how she discovered that Schuyler had been dropped off at THE WROOOONG FUH-KING LOCAAAATION.

The drama was short-lived. Julie quickly discovered that Schuyler had been taken to the YMCA (her after school provider last year) by mistake, thanks (I think, although it's not clear at this point) to her school using a list from last year. Schuyler got intercepted by some staff who remembered her, and she was wearing her gimp tag, so it wasn't like she was standing at the side of the road somewhere, silently thumbing a ride.

Still, she was at a location where no one was legally responsible for her safety and where, since she wasn't on the YMCA's list, she could theoretically have been taken away by child molesters or cannibals or the Jane Book Club and no one would have necessarily stopped them. So it was a big deal. Julie and I were still twitchy hours later.

Perhaps not coincidentally, I think I have two spots at my temples that appear to be going grey. I noticed them this morning.
by Robert Hudson at 1:38 PM

Just wait until your "baby" is going into 8th grade (we can see the high school horizon line, but it's not quite in view thankfully).

Screwed up bus drop-offs would be my biggest fear (and is why I'm thankful we don't have a bus at any of our schools).

First grade?! Doesn't seem possible. I love that picture of her...seems to capture her spirit, her courage and her sense of adventure.

Bus mix-ups suck. Been there, done that. Glad she was well taken care of by friends at the Y!

This happened last year also ON THE FIRST DAY of school for my then first grader too. Freaking out? Yeah, just a little. They sent him home on the bus even though they had explicit directions not to and just by chance I was home or he would have been sitting on the front porch till early evening, probably crying. AND he had never ever been in a position to have to walk home alone from anywhere, not even a friends house so how he knew to get home, I'll never know. It took him a long time after the bus dropped him off. Given I wasn't expecting him, when the doorbell meekly rang 30 minutes after the bus dropped all kids off, I had no idea I would be opening my door to my son. Bottom line, story had a happy ending but moral to the story, even the good schools have idiots working there....you can't count on anyone and you have to follow up follow up follow up to the point where you have racked their nerves so badly, they'll never make that mistake again (with YOUR child anyway :).

What a crazy world. Hence mandated close involvment with your kids at all times!

I remember getting dropped off at the wrong bus stop on my way home one time. We lived in the country, so it was probably close to a mile away. I was about 8, so it's a good thing my brother was along, too (he would have been 10).

I'm glad she was at least dropped at a reasonably safe location. Maybe you could teach her (and program her BBOW) to ask a person in authority to call a specific phone number (your home, work, or cell)? Except she'd have to be clear on the distinction between 'person in authority' and 'scary stranger.'

Oh, good lord. My stomach dropped through the floor when you said 'wrong location.' I had the horrible image of Schuyler sitting silently in a parking lot somewhere...

One time the school lost my nephew. They couldn't even remember hwere he had been dropped off. Finally they figured out he had been put on the wrong bus and sent to the recreation center, where no one knew who he was.

There are now second attendants on the busses.

Gah I remember you leading up to the birth, so this is definitely amazing. How awesome! the uniform looks snappy. :)

Stop feeling old. You shouldn't feel old until your daughter has her first car crash.

oh man, what a panic moment. yikes. i hope she wasn't too freaked out about the whole thing. my kids get really panicky when the bus (woops, i just wrote puss on accident) goes by and forgets to drop them.

she must have done ok, or you would have said. can't wait to hear all about her and the first grade.

Donna said....
I choked up when I read her first day of first grade.
How did we all get so old?
Our baby, going to school. Jeeze.

First grade tends to be more startling than kindergarten is. I have a photo of Rymer getting on his bus on the first day of 1st grade (last year) and thought, "wait, how can he be almost 7?!!" The fact that he'll be 8 in October and starts 2nd grade next month simply floors me. I remember reading about Schuyler's birth with my own 14 month old chubbin on my lap and it seems like a year ago not almost seven.
I think bus mix-ups are a first grade ritual by the way, Rymer went through two last year..the first one wound up with him being taken back to school (although the 45 minutes of sheer terror before both I and the school knew exactly where he was almost killed me)the second one proved that kids are more resourceful than we give them credit for as instead of walking the five blocks home alone he calmly made his way to his best friend's house a block away even though his friend had been absent that day, told his friend's mom what happened and waited. No panic or worry on his part.
So, how did Schuyler like the first few days of first grade? Wasn't she in the mainstream class? Did she like it or did she miss all her friends too much?