I don't usually cross-post much, and I tend to keep the diabetes talk off this blog, for the simple reason that it tends to bring out the assmonkeys in battalion strength numbers.
But I wrote an article for dLife, called "Club Membership", that I think is worth sharing, precisely because of the previously mentioned assmonkeys.
Anyway, here you go.
-----
UPDATE, 12/3 - I guess I had a little more to say...
by Robert Hudson at 7:42 PM 5 comments: 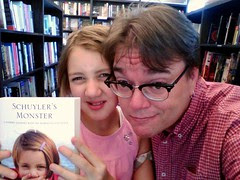 Sad day at Legacy Books
Originally uploaded by Citizen Rob
Earlier this evening, we visited a new independent bookstore in the area. Well, it's technically new, anyway; A Real Bookstore opened this week following the closing of my beloved Legacy Books a few months ago. Same people, slightly different concept, and I wish them well. The new store isn't quite as fancy or unique as the old, but I think it has at least a chance of surviving, so there's that.

Anyway, as Julie and Schuyler went to the (very nice) kids' department, I briefly stopped in the Biography section to see if they had my book. (Because I am a total narcissist, sure. I'd like to see YOU walk into a new bookstore and not check to see if they carried your book. Judgey.) I discovered that not only did they have it, but it was a copy left over from my store appearance back in 2009, complete with autographs from me (in boring black ink) and Schuyler (in pink, with little flowers). If that sounds like fun to you, well, now you know where you can find it.

I rejoined the fam and we explored the store for a while. As we moved back towards the front of the store, I turned to Schuyler and said, "Do you want to see if they've got your book?" She was all about the idea, budding little narcissist that she is. When we found the book, I pulled it out and held it over her head.

"Want to see a magic trick?" I asked. "I'm going to sign this book with my BRAIN!" I closed my eyes, put the book to my head and made a funny alien sound for a few seconds.

"Do you want to try it?" I asked. She nodded excitedly, and I put the book to her forehead. She closed her eyes and made some appropriately weird sounds. "Sign it in pink," I said "And draw some flowers!"

When I opened the book and turned to the title page, I have to say, she was muchly impressed. I suspect she might have seen through my shenanigans, but if so, she kept it to herself. Sometimes Schuyler plays along when she knows better. She understands that there are different kinds of magic in the world, I guess.
by Robert Hudson at 10:10 PM 5 comments:

Email ThisBlogThis!Share to TwitterShare to FacebookShare to Pinterest
Labels: schuyler, shepherds of the broken, the book 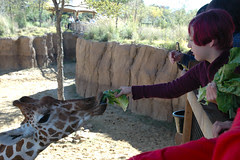 I wasn't sure how to answer that question when it burst forth from a grouchy old woman at the grocery store (why is it always grouchy old women at the grocery store?), in response to Schuyler's energetic babbling. (Well, okay, I lie. I knew exactly how to answer her. Let's just say that I neglected to take advantage of the teachable moment and leave it at that.) And honestly, having a good answer isn't a high priority. Schuyler's behavior doesn't typically inspire remarks like that, and there are just some people who enjoy hating at the world around them all the time.

Honestly, I don't imagine it was an actual question so much as a statement. "There's something wrong with your kid." But I wonder how often people ask themselves when they see her, particularly when she's in a talkative mood. I saw the question in the eyes of a Verizon guy who came to my door the other day and found himself face to face with an odd little girl with some incomprehensible questions, presumedly not about the tv/internet package he was peddling. He was polite to her, probably because he was trying to sell something to her father, but it was in his eyes. I think he was wondering what was wrong with her, too. It happens sometimes.

There are a lot of potential answers to that question, but I'm not sure how many of them actually tell Schuyler's story. Her monster makes for a long, unsatisfying answer."Well, you see, she's got a rare brain malformation that robs her of most of her speech, obstructs her fine motor skills, has resulted in developmental delays that inspire some well-meaning but lazy professionals to attempt to label her as 'retarded', causes her to drool sometimes, which of course kicks open the bully door for the shitty little kids at school, and oh yeah, might give her seizures one day. As a matter of fact, I think she may be having small ones now, but I can't prove it without allowing heartless pediatric neurologists to once again rudely glue electrodes to her head so they can again tell us that SOMETHING is happening but they don't know what."

That's a lot of information for the grocery store.

And it's not the whole answer, either. What's wrong with Schuyler? Does she go to school in an especially class-conscious community that places high value on one thing -- conformity -- that Schuyler will never be able to fully achieve? Why, yes. Yes she does. Is Schuyler's father underemployed and slowly going under financially? Is he rapidly losing his faith in his ability to take care of her? Yep. Is she about to leave the relative safety and nurturing environment of elementary school for the Lord of the Flies crucible of middle school? You'd better believe it.

None of those is probably the answer the old woman in the store was looking for, either.

The thing that is wrong with Schuyler most of all is that she lives in an unfair world, one that isn't ready for a kid like her, not completely. And it's not the wags at the grocery store who are the problem, either. It's those of us who love her and care about her the most that make the mistakes that bring her down.

I won't go into the details, but at her after-school program last week, Schuyler was accused of some things that she is actually physically incapable of doing. As we discussed the situation with the on-site director, it was revealed that despite the rather detailed information submitted by us and by the school, a lot of the basics of Schuyler's condition have gone essentially unknown and unobserved by the staff. This isn't just unfair to Schuyler (yes, she needs a speech device to respond to questions when she has been accused of something); it can actually be dangerous to her. (No, she can't eat chips. Yes, they could kill her. Trust me; I've watched it happen.)

I met with the director the next day. Now, I know it sounds like I go into these situations guns blazing, but in fact I almost never do. With a very few exceptions, I have been polite and measured during even the most contentious encounters with any of Schuyler's teachers and staff. This time wasn't any different, but I did make it clear that we were disappointed, and that our faith in the program as a safe place for Schuyler was badly shaken. The program director's reaction, however, was one of genuine remorse, especially when I related that Schuyler was sad and apologetic now without even understanding what she had supposedly done. I thought the director might actually cry. And even though I had done what I needed to do and had expressed exactly what had to be said, I still felt (and feel) badly about the encounter. I wouldn't do it any differently, but I don't actually enjoy being That Guy.

Schuyler is the best friend anyone could ever want. She's loyal and she loves with her whole heart. She recently made friends with an entire squad of color guard girls at the high school where one of my best friends teaches. She actually became cross at me for referring to them as her friends. "They're my SISTERS," she corrected. She also lists as her friends a quartet of giraffes she fed at the zoo recently. Of course, giraffes are cool, but what she wants most of all is to have friends at school. She's learning, the hard way, that they can be elusive.

Schuyler tries, though. She tries to make peace with a world around her that doesn't quite know what to do with her. She works so hard at presenting herself to the world, almost as if she believes (as I do) that if they could just look at her with fresh eyes, if they could approach her on her own terms without trying to cram her through those horrible bullshit societal filters, then they would see how perfect of a friend she can be. Broken and weird, wholly unique, but a perfect friend.

Unlike me, she believes in the world's capacity to return her love. THAT is what's wrong with Schuyler.
by Robert Hudson at 12:40 AM 29 comments: