On this Christmas morning, I want to reach out to everyone whose lives have radically changed this year.

That's certainly true of Schuyler and me, and only some of that is due to the pandemic. Last Christmas was something of a disaster, mostly because we were in the middle of a divorce, and you can say all you want about the very best intentions, but that word "amicable" still has a lot of room for heartbreak.

We're here now, in a new town with new people we love around us, and that's a positive thing, but it's also challenging. Christmas is the season of joy and connecting with the ones you love, but it's also a time of traditions. Not just about preserving our own traditions and our own sense of family, either. It's also about making space for everyone else's ways, their hopes and their routines and rituals, and respecting them as much as you do your own. I have a lot of work to do there.

When families change and form into new things, it can be difficult to hang onto the traditions that matter. But they do matter, very much, and I've been trying my very best to keep alive the ones that are meaningful to Schuyler. That's my job as her father, and more than ever since I upended her life so radically this year. It's important for her to feel like she belongs here, and for the people here to find a reason to accept us into their world. I suppose that's true for me as well. I'm not sure I'm succeeding, but there it is. I try and I fail and I try again. Maybe it's the "try again" part that matters, although that doesn't feel especially true in the moment.

Moving away from an unhappy situation and trying to build a better one is a positive thing, but it's complicated for all of us. A lot of bridges burned down this year, which I guess is normal in a divorce but hurts a lot nevertheless, at Christmas most of all. Most of the time I'm good with it, and so is Schuyler, because she recognizes that our home wasn't a happy one and that we were stuck in a place that couldn't last. This is better, for all of us, not just Schuyler and me but for Julie and her family, too.

But at Christmas, it can all feel daunting, like it's just too big. That's the thing I'm working on with Schuyler today, and myself as well.

As I look through Facebook, I see it in a lot of your posts. Things are different, and things are hard. I'm not sure what to say about that, certainly nothing to make things better for anyone. But I guess if I had a Christmas message, it would be simply that I see you. I see how hard it is, and the fact that it's hard for everyone doesn't diminish that at all. It makes it harder to feel seen. So at least know that I see how difficult it is. If one person truly sees, you can be pretty sure that lots more do, too.

I hope that wherever you are, in whatever situation you find yourself in, you're finding a way to make it work. And in that effort, I hope you will find an authentic and lasting joy. 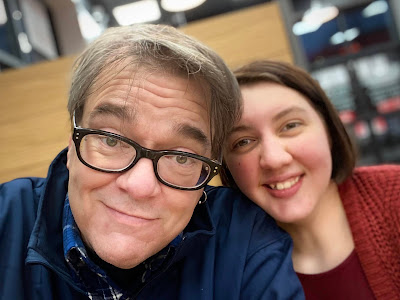