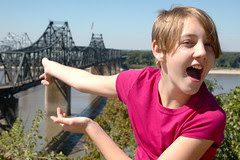 Ta-daaaah!
Originally uploaded by Citizen Rob
I am happy to report that Schuyler and I survived our almost 1,500-mile round-trip drive to Auburn University for the Alabama Assistive Technology Expo and Conference, where I delivered the opening keynote address and also presented a breakout session on AAC implementation from a parent's perspective. Not only did we make it through the drive without any lasting damage, but we actually had a pretty good time.

As far as the drive itself was concerned, there were highs (the Mississippi River, with which Schuyler was suitably impressed), some lows (the actual state of Mississippi itself; the parts we visited reminded me a little of an episode of "Hoarders", except, you know, everywhere) and some in between (getting lost in Alabama, which resulted in a charming and pretty drive but also added a lot of time to an already daunting journey). I've made long, 12+ hour drives in the past, but I never did it sitting on a 42-year old ass before.

The conference itself was outstanding. I'm always impressed by the participants I meet at these things, people who have dedicated their professional lives to helping folks like Schuyler and a lot of others whose monsters are pretty frightening. They've decided that this is what they want to do with their lives, and they invite an everyday schlub like me to come stammer my way through a speech because they want to hear what a parent has to say. They want to know how they can do what they do even better, even though from where I'm standing, they appear to be doing extraordinary work as it is.

Schuyler was her usual social butterfly self. She was a good kid for the duration of my presentations, which is pretty amazing when you consider that I spoke for about two hours, and yes, she's a ten-year old kid with a self-charging battery and a brain that feeds off of new experiences. A lot of kids, particularly those with special needs, require lots of order and routine and even ritual. They don't like change and they can only handle so many new experiences and people at one time. Schuyler is the exact opposite. She craves new worlds and new friends, and when she falls into a routine, that's when she's in danger of losing her way. Schuyler exists in a world with very few grooves and a few too many ruts. Conferences like ALATEC are like a drug to her.

It would be hard to say what the high point of her trip might have been. It could have been her fascination with the exhibitors, including a maker of prosthetic limbs that fascinated her. ("Daddy, I want one." No, Veruca, you cannot have a prosthetic leg, even if it does have flames painted on it.) It may very well have been her conversation with a deaf woman using her device and an interpreter but also by way of sign language that I had no idea she still remembered; she wants to learn more now, and she wants me to learn with her. Or Schuyler's high point may very well have also been the most memorable, when she lost a loose tooth right in the middle of a reception and proudly showed way too many people how much cool blood she had in her mouth. ("Look, I'm a vampire! Look at all the BLOOOOOD!")

I'm never sure if people are charmed or put off by Schuyler, but I also have come to believe that it doesn't really matter. She can be a wild kid and a clinger and a tornado, she can love you with all her heart and she can crawl up onto your last nerve, but the thing about Schuyler that I still value more than much else is her complete lack of guile. She is easily the most genuine person I have ever known in my life, and the older she gets, the more I hold onto the possibility that she might not entirely outgrow that. The thought scares me, but it also makes me inexplicably happy.

Anyway, I'd like to thank everyone associated with ALATEC, particularly Lydia Walls at Auburn and Joe Helm, Assistant Commissioner of the Alabama Department of Rehabilitation Services; Auburn's Kate Musgrove, who was the primary recipient of Schuyler's inevitable girl crush and who was nice enough not to get a restraining order; Sarah and Laramie, two students who were also on the receiving end of Schuyler's stalkerhood ("They are my sisters!"); and PRC's Sandy Baldwin, who not only took care of Schuyler during my presentation and actually helped her clean up after the bloody tooth drama, but who also cheerfully and patiently endured my troublemaking, both during my session and afterwards.

The troublemaking, incidentally, involved the identical responses that I got from many of you as a result of my question before the conference, about what you'd say to the assistive technology industry if you could. I hear it time and time again, and I see it referenced all over the AAC world. "When will AAC producers, particularly the Prentke Romich Company, produce an app that will take advantage of the iPad as a platform for its language system?" In my own defense, I think to NOT bring it up would have been timid and even wrong of me. To be blunt, I don't know that anyone is dying to have a DynaVox app for their iPad, but PRC's version of Minspeak is widely regarded as the most robust and ultimately successful language system for AAC devices. It's not for everyone, but for users like Schuyler, it has made the difference.

After quoting two of you in my presentation ("My heartfelt desire would be that PRC would develop an iPad-compatible interface.", and more pointedly, "The cost comparison outweighed the years of experience of language forming that the Vantage provided."), I gave my opinion. And at the risk of further troublemaking in the service of both a good company full of good people, and the very best of causes, I think that's how I'll end here as well.

Now, I’m sure you’ll talk a lot about this over the next two days, but let me just say that I believe that one of the most promising developments in AAC right now is the emergence of Apple's iPad on the market, as well as whatever competing products inevitably appear. For parents of AAC users who are largely ambulatory, including that huge population of kids with autism, most of the issues surrounding funding and decision-making and parental autonomy may change dramatically with the possibility of purchasing a $500 device at the mall.

And it’s not just about funding, either. It also addresses the resistance of our kids to use a speech device even under the most ideal circumstances. And it provides a rather elegant solution to the social integration problem. Kids with even the most advanced dedicated speech device are still carrying around something that tells the world “I have a disability.” Kids using an iPad have a device that says, “I’m cool.” And trust me, being cool, being like anyone else, that means more to them than it does to any of us.

The piece that is currently missing, however, is development for the iPad by companies like PRC and DynaVox. I could be wrong; there could be plans in the works to bring their language systems to the iPad that I’m unaware of. But until then, the gap will continue to be filled by smart, independent developers like Proloquo2Go’s Sam Sennott. Right now, it’s the Wild West in AAC development for the iPad.

Make no mistake. The iPad will bring a level of democratization to the AAC implementation process that parents and educators will take advantage of. And families using systems like PRC’s Minspeak-based Unity language may very well find themselves in the unenviable position of having to choose between the system they know works best for their kids and the system that they can afford. As a true believe in PRC’s language system, I have to say, that possibility breaks my heart. I don’t think I’d be exaggerating one bit to say that most of Schuyler’s success over the past few years has come about as a direct result of Unity. It has saved my daughter’s future, probably literally.

Now, I’m not sure what that business model would look like, the one where companies like DynaVox and PRC are developing for both their own devices and those available to the average consumer. But look at the trends in both educational funding and technological advances in the consumer electronic market, and I think you’ll see that someone needs to figure out that business model, and they need to do it soon.

So there you go. Please give us an app.