I haven't written much here, not for a while. Part of that is the simple fact that blogging has become something of a dying... well, I won't say "art", exactly. Writing is writing, as far as I'm concerned, but as a way to deliver the written word, blogging has sort of lost its shine with the cool kids. Since I am passionately devoted to being as uncool as humanly possible (ever see my high school senior photo, the one where I have a firm grip on both my trombone and my virginity?), I'm going to go back to blogging for a while as I get deeper into my new book. I find I miss this kind of writing, and it helps me process my thoughts for my other work, the kind that will hopefully result once again in the killing of many trees. And it's probably cheaper than therapy, plus I don't get called out if I try to lie to you. So, blogging it is.

When writing about Schuyler and myself in my posts on social media, I've been painting a pretty rosy picture of our lives this last year or so. That picture isn't inaccurate; I have been in a wonderful place, a happy place of renewal and personal satisfaction, and Schuyler has been growing and experiencing the world in a very different and exciting way. We're happy here. We're very, very happy.

As I mentioned about a year ago ("Dispatch from the Land of the Eighty-five Percent"), however, the trip to get here was complicated and not without pain and loss. I left wreckage in my wake, I will admit that and own it entirely. I guess it's up to the people in my life to decide how they feel about that. For some, including members of my family, it's too much, and I accept that (as if I have another choice). Other friends understand how complicated the human heart can be and are at least trying to find room for grace. That's really all I can ask for.

If you read my book, you might remember a chapter called “Nothing Makes Us So Lonely as Our Secrets”, in which I discuss a relationship I had during the early years of my marriage, and how it fell apart. The end of that relationship represented what I thought was going to be the great heartbreak of my life. Of course, almost exactly a year later, Schuyler's polymicrogyria diagnosis taught me what devastating heartbreak could really feel like, and how capable I was of surviving it, albeit at great cost.

When I wrote about that relationship (in fictionalized terms to protect the innocent and guilty alike) in Schuyler's Monster about five years later, I wrapped up the end this way:

At Grand Central Terminal, when it was time for me to get on my train, Madeline impulsively returned to New Haven with me, to my now empty house. The next morning, I drove her to the train station, held her for a long moment and kissed her goodbye. I watched her walk down the long passage to the train platform, and I knew in that place in the center of my chest, the one with the sharp but not unbearable pain, that I would never see her again.

And that was true, until it wasn't.

We found each other again, after almost twenty years.

And we got married last May.

So when I said I'd never see her again, I was wrong. Happily, epically, gloriously wrong.

So here's the part where things become complicated, because they're real. And they affect Schuyler in ways that are new for her.

Schuyler and I are now part of a grand new experiment, the blending of two families, and it's been challenging. Adrienne (the Real Wifely Person Formerly Known as Madeline) has kids, and she's got an ex with whom I have a problematic relationship. If you were to ask me if that creates a hard situation for everyone involved, I might inquire as to whether you were amused by the pope's headwear.

The Brady Bunch was a filthy lie. Don't let anyone tell you differently.

I'm now living with my tenacious daughter and a woman who loves her, and who also loves me unconditionally despite my encyclopedic catalogue of flaws. Into this happy scene we mix people, children and adults alike, who are not necessarily inclined to share in our bliss. Schuyler always wanted siblings but was denied by fate and our choices made with incomplete medical information. She’s getting them now, and learning what the rest of us who had brothers and sisters always knew.

And then sometimes they are wonderful. That’s a price the universe makes you pay, I guess. One of many.

Schuyler is an extraordinary person, the finest human I know by a country mile, but she’s not easy. She’s something of a mystery box, presenting as childlike in some ways and then remarkably beyond her years in others. That whole “this person with an intellectual disability presents as such-and-such age rather than their actual chronological years” has never been a very good metric for most people with developmental disabilities, and it’s particularly unhelpful where Schuyler is concerned.

Schuyler can be almost unwaveringly positive, except when she plunges into occasional depths that can seem unrecoverable in the moment. She loves with her whole heart, almost distressingly so for me, but she tends toward paranoia and can hold a grudge like no one else I know, except perhaps for her old man. Most of all, Schuyler sometimes finds herself in the grip of powerful emotions that she doesn’t entirely understand or know what to do with. I can try to prepare new people in her life for what she’s like, but there’s really only one way to learn.

You jump into the deep water where Schuyler swims, and you figure that shit out in a hurry, perhaps while trying to teach yourself to swim as you go.

In some ways, that’s where everyone in Schuyler’s life is right now, in the daunting part of unfamiliar and choppy waters. But they’re not actually deadly waters, and God knows they’re not stagnant. She's going to have to figure the new people around her out in a hurry, and they're going to have to learn to give her the grace to do so. I wish there was more I could do to make that process work. My inability to do so feels like I'm failing, and in the midst of my extreme happiness, it's a dark spot that I find myself unable to turn away from.

There's an ancient Chinese saying that is neither ancient nor Chinese. "May you live in interesting times." The conventional disagreement about the saying is simply this: Is it a blessing or a curse?

The answer, of course, is yes. 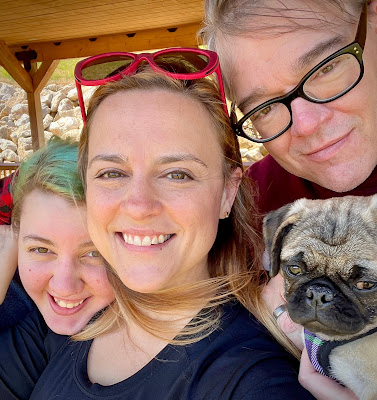