Schuyler’s time in high school is quickly drawing to a close, faster than either of us are emotionally prepared for. As part of that transition, her percussion studio at Plano Senior had their end-of-the-year pool party yesterday, an annual event that concludes with awards, remembrances of the graduating seniors by her percussion director and a round-the-room sharing and appreciation by all the students in the class.

The final award given is a kind of spirit award, but more than that. It’s named after a former student, one who brought so much enthusiasm and positivity to the band and had such a deep effect on the people around him that the award was created specifically with him in mind. He wasn’t disabled, not that I know of. He just set a bar for bringing a kind of leadership through attitude and personal relationships. He possessed a light, we were told, and a kind of gravity that pulled in the people around him, and the award looked to recognize that quality in others. It’s an interesting award in that the criteria is based on intangibles. It’s one that has a great deal of meaning to the director and to the students.

And this year, the award went to Schuyler.

It was a bit of a surprise, I’ll own that. I worry so much about Schuyler finding acceptance and being understood by the people around her, not just her communication but her overall “Schuylerness”, and out of my fear for her quality of life, I occasionally (and shamefully) forget to make room for the idea that she’s giving something to the world around her. Being surprised by Schuyler’s success is never a reaction that makes me feel like a swell father.

And yet, as her director described the award and the young man for whom it was named and founded, I found myself thinking that in a just world, in a fair and inclusive society, Schuyler could win an award like that. Hearing her name announced did something to me, something weird and hopeful and a little bit guilty for believing that in THIS world, in MY world, Schuyler wouldn’t win, couldn’t break through the barriers that have dogged her and her friends all along. When Schuyler won that award, it spoke to possibilities.

In his comments about Schuyler, her director spoke about her early days in band, and was frank about how so many people at the time simply didn’t get Schuyler. I remember those days. When she got to middle school, something changed for Schuyler. She didn’t charm everyone like she did in elementary school. She confused many of her teachers and frustrated a few. But her band director got her entirely, and that band director was married to the percussion director at Plano Senior. He knew Schuyler already, and he got her. He was one of the primary reasons we elected to send Schuyler to Plano Senior. He and his wife get Schuyler as much as anyone in her life, as much as any family member. They will be profoundly missed when she graduates.

Schuyler’s fellow students spoke about her positivity and how much joy she brought to their lives. One young man spoke about how happy he was to see that he had been assigned to Schuyler’s concert band because she was so much fun to make music with. Another told her how when he saw her at Homecoming, he was taken by how much natural beauty she possessed, and how so much of that came from the person she is at her core. The one thing that none of her fellow percussionists said about Schuyler was that she was an inspiration. The thing that no one did was condescend to her.

That was a big deal. That was a really big deal. I've been writing and speaking about the value of authentic relationships with people with disabilities, about how I believe that's the key to successful disability advocacy and a truly inclusive society. I don't think I give a half-terrible presentation on the topic, either. But Schuyler is my best argument. At times, she's the living embodiment of what I'm trying to describe. She lives and breathes it. Schuyler illustrates the value of getting to truly understand people who are profoundly different and looking past their disability to appreciate the whole human. Not to pretend that disability isn't there or doesn't matter, but rather to put it in a larger, more nuanced context. The kids who have been in band with Schuyler, particularly her fellow percussionists, they started out meeting a girl with a disability, and perhaps a daunting one at the time. But to the best of them, that didn't define her for long.

In a few short weeks, Schuyler will leave the protective environment of school and the community that has come to really know and understand her. That concerns me, of course, because until she got to Plano Senior, Schuyler was dedicated on a fundamental level to passing. If you don’t know that term, in the disability world “passing” refers to the practice among people with more invisible disabilities to pass as neurotypical, to hide their disability and walk through the world with their differences unrecognized.

It’s controversial, the concept of passing, and for good reason. For one thing, at least for Schuyler, it was doomed to fail. Even if she succeeded for 95% of the time (and that would frankly be a high percentage), that last 5% is where it would fall apart, like a commercial plane flight that was 95% successful in taking off and landing safely. Passing for Schuyler meant delaying the inevitable, and it perhaps sent a message that there’s something shameful about her disability, and that she sees herself as less. In a society that struggles to treat people like Schuyler as fully realized human beings, that’s a dangerous path to go down.

When I say dangerous, I mean that literally. My dear friend and speech language mentor Lindsey Paden Cargill recently tweeted the disturbing results of a study showing that passing (or social camouflaging) is the best predictor of suicidality among autistic people. Think of that for a moment. Trying to mask their differences and pass for typical is literally costing neurodiverse people their lives.

Schuyler isn’t autistic, and I realize that there’s only so much that can legitimately be applied to her from that study. But I believe that the more Schuyler attempts to present herself as something she’s not, the more damage she takes on herself. She’s not less. She’s different, and she requires some patience and some accommodation in order to move successfully through the world. But when she’s truly understood and truly known for herself, she takes flight.

I think she’s beginning to get that. Maybe it began when she found her tribe in band at Plano Senior last year. It was certainly strengthened when she began to advocate for herself in the presentations we’ve given over the past few years. Perhaps it’s simply part of her growing up and finding her place in the world, an elusive groove that is only now presenting itself to her. All I know for sure is that she’s excited about this summer, presenting in Denver and in Australia, being surrounded not just by people like her but also by people who aren’t but whom she could maybe reach and find a new understanding.

Recently Schuyler got a new speaker to boost the inadequate sound produced by her iPad. When it arrived, I confess it was larger than we expected. She was looking for something she could attach on a lanyard, but this speaker was a little too large for that. It was also much louder than any speaker she’d used before. Louder, and deeper, more present.

The first time she used it to order at a restaurant, she jumped when her electronic British voice spoke. But the reaction she got was entirely positive, and since then, she’s been using it at full volume most of the time. She’s less afraid of being noticed and more enamored of being actually heard and understood. Finding more success at communicating is apparently worth the risk of being looked at and having her difference recognized.

When I asked her how she liked her big, loud speaker, Schuyler told me that she has a new motto. “No more hiding,” she said.

She may backslide from that from time to time; I can’t imagine she’s done with people who don’t understand what she’s all about and who have no patience or empathetic inclination to try. But yesterday, as she learned just how highly she is regarded among her peers, Schuyler saw with fresh eyes just how much she has to gain from being who she is, without pretense.

I’m looking forward to seeing more of her embracing her authentic self. The world is going to be a better place with that particular Schuyler in it. 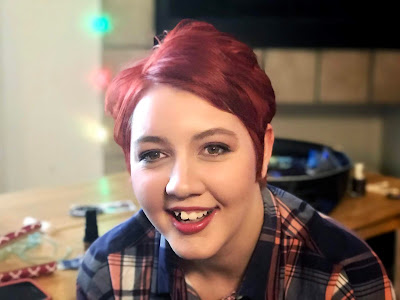