Every family has its traditions. A few of ours are a little strange, I suppose. Some have nothing to do with Schuyler's disability. When a new monster movie comes out, for example, Schuyler and I always go to see it together. Always. This dates back to King Kong when she was five and has included such kid-friendly fare as War of the Worlds and Cloverfield. I haven't checked to see what Super 8 is rated yet, but I suspect it won't matter. We'll be there on Friday morning.

When traditions come from a broken place, though, they can still have their unique ceremony and their own kind of charm. We don't think of them as having anything to do with disability until later, if at all.

Today Schuyler came home from her final day of classes, backpack full of the detritus of the fifth grade. She took off her shoes and threw them in her closet, and I'll be surprised if they see the light of day again before September. We went through her stuff and read through the comments written in her yearbook by her friends and teachers. I was happy to see that they pages were mostly full.

And then, as we've done every year of her school life, we got out her speech device and changed a setting on a page of pre-programmed often-used phrases, now telling the world that she is in the sixth grade.

This year, we got to change the school, too. 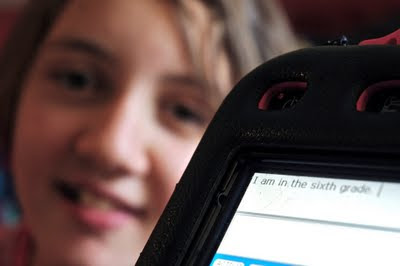 This post makes me smile. Have a wonderful summer, Schuyler!

I'm smiling, too! (love the use of the word "detritus" as well. One of my favs)

Enjoy your summer, you both certainly deserve it!

Such sweetness and love within this post. We eat ice cream on the last day of school and make a list of 5 things we would like to do this summer, sort of a summer 'bucket list.'

Thanks for this post. I was feeling low because my son lost a tooth and he doesn't "get" the tooth fairy (I know stupid). Anyway, I changed his grade on his talker and enjoyed his huge toothless smile, as he giggled with pride. Thanks for the reminder that we make our own rules.

What a cute story!
Found you through LoveThatMax and am a new blog follower!
www.outrageousfortune.net