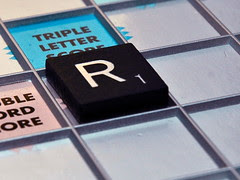 Just a word, Redux, a photo by Citizen Rob on Flickr.
It's been almost two months since I gave my own perspective on the so-called "R-Word" (May 5, 2001 - "Just a Word"), and an interesting conversation has grown out of it. The discussion gave me the opportunity to clarify my position a bit, and to also navigate some of the grey areas in my own thinking.

The most important point for me was that I'm not looking for some kind of ban on the word, which is a silly idea anyway. I don't want to stop people from saying that someone or something is "retarded" if they really want to. If someone feels compelled to use a word like "retard", I think they should absolutely do so, because I want to know that about them and the kind of person they are. And as a person who once used that word fairly frequently, even in my writing (and as recently as four years ago), I felt a little like Nixon going to China. If I can change because of my own experiences with my daughter and the people who would use that word on her, then maybe other people who have greater sensitivity than me can do it, too.

And honestly, I also want to give them a chance to convince me. I want them to understand exactly how powerful a word like that can be, and if they DO get that and still think it's the word they need to use, then I'm all ears. I'm probably not going to agree with them, but I don't think I'm going to change anyone's mind if I try to silence them from saying what they want to say.

Mostly, I want them to NOT want to say it in the first place. I want the word "retard" to taste bad in their mouths.

I was asked to join a Facebook group the other day, one that takes a fairly hard and unforgiving line against any use of the word "retarded" in the entertainment world. Ultimately, I declined. I understand what they wanted to do, but when someone like Lady Gaga or even President Obama slips up and makes an insensitive remark, it's their reaction and the steps they take to make it right that I think provide a chance for real change. You learn a great deal about a person's heart by how they react when they screw up. The word "retarded" has become such a part of the popular culture, and prying it out of the vernacular is going to take some patient work.

Furthermore, I couldn't get behind the group's blanket boycott of television shows and films with characters who use the word. When a celebrity makes a stupid remark in public, I am all for holding them responsible. But what about when a writer uses a word like "retarded" in a line of dialogue to help create a realistic character, like when portraying a snotty teenager on "The Killing"? (The most offensive thing about that show was the season finale; don't even get me started.) Or if the word is used by despicable characters in order to make a larger point about society and the entertainment industry, as in "Tropic Thunder"? As a writer, I have to respect that nuance, and the right of other writers to use ugliness to draw larger pictures.

There's a saying that if the only tool you have is a hammer, then every problem starts to look like a nail. I don't easily take up that particular hammer.

So there are grey areas, and there are honest mistakes that can be remedied, and in those remedies, further awareness of the power of words can be increased in society. If we attack every single utterance of "retarded" and refuse to accept the apologies of those who offer them, we're going to be using our very limited resources to play a gigantic, losing game of Whack-A-Mole. In most cases, we need to educate, not punish.

Because sometimes, there are battles that are truly deserving of every ounce of outrage we can muster. There are people who use the word "retarded" deliberately, not with the slip of a tongue and not wielded satirically, but with cold, cruel calculation, for the purpose of mocking children with disabilities. For easy laughs.

After another brief flirtation with a woman in the crowd, Mr. Morgan turned sincere. "I love you all so much," he said, "did I tell you that tonight? I've been in trouble lately, and this was big for me that you all came out."

Whatever he had been accused of, Mr. Morgan said, "I don't have that in me. I believe gay, straight, anybody, everybody's supposed to be happy in this world, man."

Resuming his routine, Mr. Morgan warned his audience, "Don't ever mess with women who have retarded kids." As groans and cries of "Uh-oh" were heard, he continued, "Them young retarded males is strong. They're strong like chimps."

Finally, he concluded with a bit about his alleged teenage romance with a girl he described as "a cripple" with a prosthetic arm, a mechanical larynx and a portable dialysis machine.

Tracy Morgan didn't make a mistake, any more than his recent and vile anti-gay remarks were an accident. It wasn't an "oops" moment. He couldn't have thought for a moment that no one was paying attention, not on the heels of his previous homophobic remarks. It wasn't off the cuff. Knowing the risk he was taking, Tracy Morgan deliberately made a horrible, stupid and premeditated joke about a specific group of people whom he concluded were mostly powerless to push back.

I'm going to cynically suggest that he may very well have concluded correctly.

One of the most surprising defenses of using the word "retarded" as an insult that I've heard, on many occasions, is the idea that it's okay because a great many of those in a position to be hurt probably don't even know they've been insulted, and can't really respond meaningfully. (If you truly believe that makes it better and not worse, I have two words for you, and they're not "Happy Birthday".) But that argument might actually speak to an ugly truth, at least indirectly. In the entertainment industry, I suspect that the degree of the offense is largely determined by the power of the group being offended. Power as defined by purchasing power, political power, the power to organize and fundraise, the power to withdraw financial support, the power to boycott. The power to be heard.

Who's going to speak up for "retarded kids"? Parents? Kennedys? Is NBC going to risk firing their 30 Rock cash cow over this? Will Tina Fey and Star Jones express any regret for their earlier defense of Morgan's "good heart"?

If you've read my thoughts on use of the word "retarded" and wondered where I draw the line without nuance or shades of grey, here you go. I know he's not alone in the comedy world, but he's got a bigger platform than most. Tracy Morgan just set my gold standard for "Don't say that."

I hope I'll need to update this post to report on real consequences as a result of Tracy Morgan's attack on children with disabilities, probably the most powerless among us. But I'd be lying if I said I thought that was going to happen.

THIS is the fight. THESE are the kinds of things that lurk out there, the attitudes towards a segment of our population that struggles for respect like no other. We simply must make significant cultural and societal changes and acknowledge that the struggles of those with disabilities are nothing less than human rights issues.

Sometimes it's hard to identify the battles that are worth fighting.

Sometimes? Not so hard.

Update, 6/30:  Well, more of a non-update.  The Associated Press put it succinctly.

Email ThisBlogThis!Share to TwitterShare to FacebookShare to Pinterest
Labels: just a word, my big opinions, shepherds of the broken, well that sucked

I appreciate the clarity you're offering here. I was nodding along with virtually everything you wrote. I find the word "retarded" toxic, I'm not at all in favor of "banning" words, I find them useful litmus tests, and I think slips can be great opportunities for change.

I hadn't read the Tracy Morgan bit. I find myself more tired and disgusted than truly furious. Like, Really? You really thought that was funny, Tracy?

I'm with you, grateful that you're expending the effort and gathering strength from that effort to keep going.

I'm of the belief that when someone chooses to demean others over things beyond their control (race, cognitive ability, etc.), it gives a clear picture of the person doing the slurring, and it isn't a pretty sight.

Funny you should mention The Killing. I hate the R word, but wasn't offended when it was used by the teenage boy. It fit the context there. I was upset and felt cheated by the final episode, but that's another story.

I would never use the R word, and would prefer for my lovely daughter not to ever hear it directed at her personally, but the thought that it could be stamped out completely just isn't realistic. Sad but true.

Thanks Rob for continuing to put this out there for thought and discussion.

And Tracy Morgan is an ASSHAT.

He is an ignoramus. I am done with him.

"It's ok to insult handicapped people because they don't know they're being insulted" is sort of like saying "It's ok to rape women because they're powerless to fight back." That sentiment is absurd and heartbreaking.

In May I attended the Canadian Down Syndrome Society conference and was lucky enough to hear a presentation by Lauren Potter, the actress who portrays Becky Jackson on "Glee", and actor Blair Williamson. During the question-and-answer portion of their talks, both (seperately) described instances of being bullied as children, and called "retard". Both (again, at different times) became very emotional and cried when talking about the pain it caused. Blair, in particular, was unable to stop crying for at least 20 minutes.
To say they don't know they are being insulted is an insult in itself!
I am going to write to NBC and let them know that I won't watch "30 Rock" anymore. And it was one of my favourite shows, which I never missed. Tracy Morgan has no heart.

I came across this post yesterday and thought you might appreciate it. It reassures me that while there may be people who truly don't understand, there are those who, really, truly, do.

I'm REALLY glad you shared that, thank you.