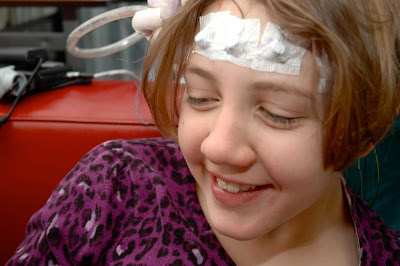 There's a lot to say about Schuyler's ambulatory EEG, I suppose, but perhaps the most important, at least at this early stage before we get any actual data from the process, is simply this: The glue came out of her hair without any of the trauma and irritation that we experienced last time.

Maybe it was new glue, or the fact that the tech appeared to have used less of it, or it may very well have been due to the good advice of the removal tech this time. (Apparently the key is to apply a liberal slathering of conditioner to dry hair and leave it on for a while. Half an hour worked well. Last time, we were advised to just comb out the hardened glue. Seriously.) Whatever the reason, the glue mostly washed right out, and the residual bits were easily removed thanks to the tiny little hair rake we had left over from a recent head lice false alarm. There are some ugly little abrasions on her forehead from the sensors, but those should go away quickly. I tip my metaphorical glue-covered wire hat to the neurology team, and to the industry that has clearly done some work in this area in the past two years.

As for the results of the test, it's obviously too early to know anything. The procedure wasn't much different this time, but there were some key additions that changed the overall feel of it. We didn't have to take Schuyler to the neuro office, for one thing; they came to our place and wired her up here. The primary reason for that home visit was to install a pair of stationary cameras, one pointing at her bed and the other parked in front of the couch, ready to capture any seizures that might occur. It was a strange experience, having a camera pointed at us 24/7 like some sort of very very very boring reality tv show.

Schuyler was more aware of her appearance this time around. When we went to Target to find a head scarf or a hat (or, as it turned out, both), she cowered behind me sadly, trying to keep from being seen. Schuyler's disability has always been an invisible one; her sudden experience with visual difference made me realize all over again that in some ways, she is a very fortunate broken little girl. 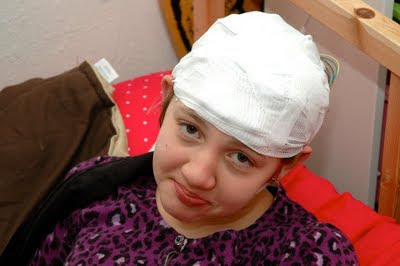 On Friday evening, Schuyler had an awful choking experience, maybe the worst ever. It wasn't with any forbidden food, either. I was sitting beside her but didn't notice immediately, so I have no idea if it was preceded by a seizure. I do know that the camera captured me at my very least impressive, freaking out over the whole thing, but I assume it also captured me reaching into the back of Schuyler's throat and dislodging the piece of food that was choking her, so perhaps I won't make the asshole reel after all.

Aside from that, I am oddly saddened to report that Schuyler's brain was, to our knowledge, happy and healthy all weekend. We watched lots of flashy tv and stayed up crazy late, but the monster didn't seem to take the bait. I'm hoping that perhaps we just missed a seizure, which is, again, a strange thing for a parent to say.

That's the thing about this process. The one thing we want to hear -- "Your kid is not having seizures." -- is the one answer we can't get. We might possibly hear that she had one; we will most likely be told that she didn't have one during the 72-hour window of the EEG. And we'll go on wondering, and waiting to see if something with bigger claws and sharper fangs decides to show its face. 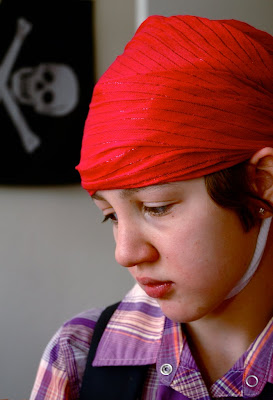 And through it all, Schuyler will continue to do what she does. She'll wear funky clothes and play Mariokarts and listen to Lady Gaga. She'll go to middle school next year and become a drummer girl (Jesus Howard Christ, remind me to tell you about the practice marimba we need to get for her), she'll make friends there, she'll make frenemies and she'll sink or she'll swim. She'll grow taller if possible, and prettier if possible, and she'll attract more looks, not just from rude adults wondering what's wrong with her but also from those boys who might simply see a girl.

Once unaware of the monster along for the ride in her head, and now just unconcerned, Schuyler will persevere, because that's who she is. I don't even know if it's ever occurred to her to give up. 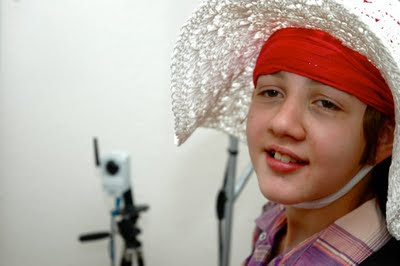 Email ThisBlogThis!Share to TwitterShare to FacebookShare to Pinterest
Labels: health, photos, schuyler, shepherds of the broken, the monster

Thinking of you all, and hoping against hope for the best best best news there is to give. I don't know, there really are no words...

I'm so glad for you all that you didn't have to rip her skin or pull her hair to get the glue off. That alone would send me off like a rocket.

You may catch seizure activity even without overt seizures. And even "overt" absence seizures are very easy to miss. I hope if there is something to be caught, you catch it, and that the right treatment puts a firm leash on it. Many good thoughts.

Some neurologists don't believe in "treating the EEG" but if her EEG shows significant disorganization or preseizure activity, this could be enough to help them with potential medications. Absence seizures are like little terrorists. You never know when or where and they are always lurking.

FYI, Lamictal is working beautifully for us with no side effects. It takes a while to ramp up, but it has been associated with improved cognition (probably because it stops seizures, duh). But every kid's brain chemistry is different, so you may have to try more than one to find something that works well. But once you find it, it can really be worth it.

We had to do a 72 EEG with my mother-in-law while she was living with us. Of course she didn't have any seizures while she was wired up. Hoping for good news for you all. On a side note, I heard this interview with Ian Brown on Fresh Air today. On the off chance that you didn't know about it, you should check it out. I particularly thought of you when Brown discussed what he calls the "disability masochists."
http://www.npr.org/2011/05/10/136137429/a-fathers-quest-to-help-his-severely-disabled-son

We've gone through the motions for everyone in our crazy family (well, except the dogs, but they don't cause half the mayhem around here anyway).
It's a strange kind of experience to actively want something like a seizure to show up, isn't it?

In our case, our three boys all had definitive seizure activity, if not actual seizures. My husband didn't have a seizure at the time, but received the diagnosis anyway, because he's special that way. *coughs* We are pretty sure it is marginally related to the rare disorder they all share, called Rieger Syndrome.

Having been through many different EEGs, as well as differing results, some horrible and some expected and some just, well, unexpected, I can say that epilepsy is one monster that doesn't always get easier to deal with given time. Sometimes, but not always. And I have been guilty of thinking similar thoughts, and then feeling bad for doing so. It's a delicate line we walk sometimes, wanting an answer even though the answer is not always the one we want. At least it's an answer.

Prayers that the answers (which I see on Twitter you kinda have now) are ones that lead to improving things for your little girl.