The comfort of cold comfort 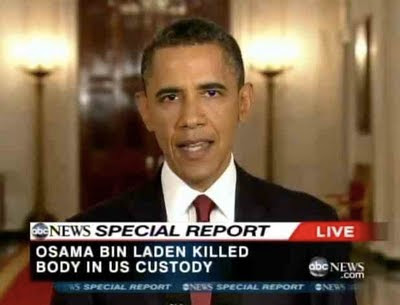 "Tonight, I can report to the American people and to the world, the United States has conducted an operation that killed Osama bin Laden, the leader of al Qaeda, and a terrorist who's responsible for the murder of thousands of innocent men, women, and children."

I watched the president say the words that I honestly never thought I'd hear. Not like that, anyway. I always figured we'd find bin Laden the same way we found Joseph Mengele. Sometime in the future, we'd get a tip that bin Laden died peacefully in his sleep some years before, and we'd find an old grave and analyze the bones, and that would be that. A footnote to history, and nothing more.

Instead, it went down exactly like most Americans hoped it would. And while I don't have much to add to the volumes of opinion making their way to the Internet today, I thought I should at least mark the moment, fraught as it might be with complicated emotions.

I sat in front of my television and watched the celebrations that began last night, the chanting of "USA! USA! USA!", as if we'd just won Olympic gold instead of killing another human being, albeit an undeniably evil one. In my head, I knew that this was wrong, it was barbaric and not much better than the crowds in faraway places who cheered and danced in dusty village streets to celebrate the carnage of September 11th.

But in my heart, I felt the same way as those who were celebrating. I felt that same visceral, tribal satisfaction. And now, even in the cool consideration of the next day, I find that, try as I might, I can't truly fault the cheering Americans for whom bin Laden's death serves as a proxy for all the things that should have come out of our long, sad national response to 9/11, all the simple plans that turned out to be incredibly and unpatriotically complicated, all the battles that should have been won but instead just led to more war, and all the sacrifices to the cause of "national security" that instead of making them safer, just made them less free.

Killing bin Laden doesn't change any of that. But it feels like it should, and for now, that'll have to do.
by Robert Hudson at 3:40 PM

See, and I honestly feel like I should be happier. I know in my head that I should be happy, should possibly be celebrating this "win". But I just can't rejoice over someone's death - even Bin Laden's.

This must be fairly common and possibly cyclical. I feel everything you posted. Last night I did my pagan dance of victoriousness in my nice living room and sang "America:Fuck Yeah" from Team America: World Police (realizing even at the time that it was meant to be an extremist satire of the very thing I was expressing), but today I feel...ashamed? (is that the word? I've heard people describe it, and it seems like this might be it). I'm glad that something so evil is gone, but it feels like we should be different and better somehow. (I'm still glad he's gone)

‎"I've never wished a man dead, but I have read some obituaries with great pleasure." - Mark Twain

I'm going to say the same thing I tell most people about this problem.

I don't care who you are: lesbian, gay, bisexual, Buddhists, Baptist, Christian or none of the above.

What I do care about is when your deity, priest, rabbi, boss or person in authority convinces you that your beliefs are to kill anyone that does not agree with you.

The celebratory scene I found creepy was the girls up on top of some guys' shoulders. They seemed to be part of a cheerleading squad but not in uniform. These young people were probably not older than 10 or 11 when 9/11 happened, if that. I'm not at all sad that he is dead, but scenes of partying and cheering just seem distasteful.