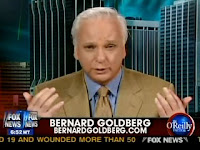 (Heh. "More on Bernie Goldberg". I'm twelve.)
I had listed these updates on the last blog post, but at this point, I think they probably deserve their own post. So here you go:

Update: I posted a comment on his blog (and you can, too!):

Robert Rummel-Hudson says:
November 19, 2009 at 10:56 pm
The thing is, and I suspect you are fully aware of this, parents of kids with disabilities aren’t offended because of your conservative positions. We’re offended, deeply offended, because you have taken our children’s plights, their very LIVES, and you have turned them into talking points. You’ve politicized the most personal and difficult decision a family can face, all in the service of a cheap shot.
Here’s a secret for you, although if you had any experience with or sensitivity toward children with disabilities , it wouldn’t be a secret at all. Most of us who are raising children with disabilities don’t hate Sarah Palin, no matter how liberal our politics might be. We may hate her politics, but she’s part of our club. It’s a club none of us ever asked to join, and it’s a club with a lifetime membership. And for Sarah Palin, as with the rest of us in that club, the politics of disability will be personal for her.
As a non-member of our club, please do us the courtesy of politicizing your own children and leave ours alone. They have enough to worry about as it is.
– Robert R-H

Update to the update: A very interesting, very intelligent comment was left on Mister Goldberg's blog that you definitely have to read. It presents, among other thoughtful points, a simple math question.

If, as reported by King's College in London, roughly 90% of fetuses diagnosed with Down Syndrome in utero are aborted, and if Down Syndrome is the result of a genetic defect that does not affect any one particular ethnic or demographic group more than any other, then clearly, liberals aren't the only parents making the difficult and heartbreaking choice to have abortions when faced with the prospect of having a child with Down Syndrome. More to the point, there are families, a LOT of them, who consider themselves to be religious, and who identify as Pro-Life, who are nevertheless making a very tough and very personal decision, and they aren't basing it on politics.

Bernie Goldberg, I hope you will consider the possibility that this decision might just be more complicated than you are allowing in your idiotic Fox News sound bite. It might be time for you to apologize for what was, upon further reflection, a deeply stupid comment.

Because I am rather fond of oxygen, however, I won't be holding my breath.

Update cubed: Bernie has issued a statement about his remarks. Buried deep within his post, near the end, is something like an apology:

As for Palin’s decision not to abort her baby with Down Syndrome: Women and their husbands should do whatever they think is best in those circumstances. I have no say in those matters and I would never try to influence someone’s decision in that area. It’s simply, and obviously, none of my business. But I am asking this: Who is more likely to have the baby with Down Sydrome, a pro-choice woman or a pro-life woman? A woman who isn’t religious or one who is? A woman who believes a life – even a life of a fetus – is sacred, or one who doesn’t? I know there are many who will disagree, but I think it’s a safe bet that the pro-life, religious woman who believes in the sanctity of life is more likely to go continue her pregnancy (even as many who fit that description will abort a fetus with Down Syndrome).

That’s all I was trying to say. I never thought I was “politicizing” anyone’s children or anyone’s pain. If I did that, my sincere apologies to one and all. But I still believe many elite liberals hate Sarah Palin for a whole bunch of reasons that have little to do with how she would vote on this issue or that — or even, as they often claim, because they don’t think she’s that smart, There are lots of lbierals who aren’t “that smart” — and they don’t seem to trouble their fellow libs all that much.

So there it is, Bernie Goldberg's sincere apology, wrapped in layers of justification and parting cheap shots like bacon, and of course followed immediately by a sentence that begins "But I still believe...". It is, in fact, a pretty weak apology, insulting enough that I almost wish he'd just said "Fuck you, I stand by my words!"
Bernie Goldberg's career as an author and a talking head is entirely, completely, 100% based on his ability to politicize every issue that he touches and to demonize and dehumanize people whose political beliefs differ from his own. If he admits that he crossed a line and that some of the heartbreaking, grey-area moral questions faced by families like ours can and should transcend red/blue politics, then he weakens his brand. I suspect, therefore, that this is as good as we're likely to get.
So thanks, Bernie. You're a peach.
by Robert Hudson at 11:57 PM

Email ThisBlogThis!Share to TwitterShare to FacebookShare to Pinterest
Labels: my big opinions, politics and my socialist heart, shepherds of the broken, video, well that sucked

When I first read this ass-biscuit's comments, I was so shocked I didn't know what to say.....I'm not terribly quick with my words. But Rob, you and Becca couldn't have said it better.....and Becca, if for some reason you are reading this.....OMFG!!!! That was brilliant!!!

I think it's significant that Becca's comment has received no response at all, and mine has only gotten a predictable reply from a guy whose obnoxious and hateful personal attacks on me and my family led to his remarks being banned from this site a long time ago. And the best he could come up with was:

"This from 'The Rob'. A man whose income is based on how many books about his daughter’s illness he can pimp."

Rob,
Just a question. Did you do a post on the MANY liberals who politicized Sarah Palin's down syndrome son? Because the beating SHE took from people was merciless. I'm just curious if the outrage over this sort of thing only comes out when the target is conservative.

Well, Kim, thank you for walking right into that. In fact, I did, and my particular point was that the accusation being thrown around by a great many liberal commentators (that she had cut special education funding in her state by a huge percentage) was actually untrue.

Also, what does that have to do with the validity of the complaint against Bernie Goldberg? How do my actions, good or bad, affect in any way how someone else writes or behaves? Because if this is another one of those "Oh yeah, well, you did it first!" arguments, I don't even get those from my nine year-old.

I don't know if it was actually Confucious who said it, but "When the wise man points at the moon, the idiot looks at the finger." I'm probably just the finger, not so much the wise man, but still. Don't be the idiot.

"This from 'The Rob'. A man whose income is based on how many books about his daughter’s illness he can pimp."

He's a jerk....you know ass-biscuit here in oz refers to a fart that is so thick and stinky you could cut it with a knife....this guy is waaaaaay thicker than that!

That Bernie is a jerk!! Parents who have kids with disabilities come from all walks of life and all political persuasions. It is personal. I've worked with kids whose parents are from all backgrounds. I have noticed that a lot of the teachers/therapists/nurses/SLPs tend to be on the more liberal side of things. Not sure if it's like that everywhere. We're pretty insulated her in MA. Michele

I believe Bernie's first words in that apology sentence: "I never thought." Spot on, Bernie.

I'm confused about this whole "liberal elite" thing. I mean... I have met a few pretentious liberals with fancy degrees from fancy schools, so I know that exists. But, really? He thinks that liberals have an issue with people who bounce from school to school and settle at U of Idaho?

I guess my collection of universities that includes schools like Georgia Southern University and Utah State University is unacceptable by many of my friends, then. I had no idea.

I guess we'll have to tell Rainbow Phoenix and Moon Unit Zappa that weird names aren't acceptable by liberals either. I hate to use celebrity names, given they're such a big conservative target, but I wanted to pick some recognizable names.

I'm more familiar with liberals who value acceptance of diversity, regardless of level of education. I'm also familiar with a liberal working-class. I feel safely distanced from any type of "liberal elite". Elite's just not my thang...conservative, liberal, or otherwise.

Anyway, obviously I'm not really concerned about these bizarre notions regarding liberals' opinions on a candidate's education or her children's names. I guess I'm just pointing out more of the absurdities in his argument that justify my distaste for this guy and this type of message.

Hi Mr. R-H, and others! I'm the Becca who made the original post in Mr. Goldberg's blog about the math problem. I just wanted to thank you for bringing my attention to Mr. Goldberg's comments in the first place, and to say that I'm extraordinarily flattered that you found what I said worthy of repeating (and repeating again, when subsequent commenters clearly didn't get it or didn't bother to read that far down). And to say thanks for continuing to remain present on that blog throughout the day posting clarifying remarks and rebuttals. All of the comments you made on Mr. Goldberg's site today I agree with wholeheartedly.

It's like being a member of a secret club, this loving of people with disabilities. And I don't have the password to hand out to make it easier for them to understand the membership. But oh lord, how I wish those who didn't understand wouldn't open their mouths on national television...

Ok just to be somewhat Jr. Highish myself, he also wrapped that weak "apology" (along the lines of "I'm sorry you got upset by that") in a typo. While slamming "lbierals" lack of smarts. heehee

What an ass. He was affected by your remark about politicizing other people's kids. But he even politicizes his defense of himself. Oh please.

I just hope this has put the dude in John Stewart's sites because you know he will serve up some more gaffes and those kinds of buffoons don't really take too kindly to seeing themselves labeled under "laughing stock" in the Enclyclopedia of No Shit.

That's pretty much all I gotta say.

"But I am asking this: Who is more likely to have the baby with Down Sydrome, a pro-choice woman or a pro-life woman? A woman who isn’t religious or one who is? A woman who believes a life – even a life of a fetus – is sacred, or one who doesn’t?"

What on this big wide world does that have to do with the original comment about liberals not allowing "that to happen?" I am all of the things listed above (although I'm not for removing a woman's right to choose) and I am also a liberal. This guys needs help on so many levels.