Schuyler had a day off for parent-teacher conferences today, so Julie and I took the day off as well. After a brief and painless meeting, we went to see Where the Wild Things Are.

And now I have a few thoughts on the film, which was not at all what I expected.

I can't say that Schuyler loved it, not with the wild abandon she has loved other monster movies or kids' movies. She was fascinated, and she wanted to discuss it after, which is always a good sign, but I get the sense that she's still trying to decide how she feels about it. I certainly wouldn't describe Where the Wild Things Are as a monster movie or a fantasy film, but as for whether or not I would call it a kids' movie, I'm not so sure.

It's not a children's movie in the sense that the Wild Things themselves are in any way fantastical or entertaining as mythical creatures. They are very human, in some vaguely neurotic but very familiar ways. But I think that Where the Wild Things Are is VERY much a kids' movie in that it perfectly hits some emotional truths about what childhood is really like, and especially how horribly and confusedly we treat the people we love the most. That these truths come from the mouths and the actions of weird Sendak monsters makes the perspective feel new, and yet totally familiar.

It's easy as adults to forget that childhood can be in large part a scary and frustrating experience, full of insecurity and fear, and that like Max in the film (and to a lesser degree the book), often the only course available to kids who find themselves feeling powerless and afraid is to act out. Not in cute, "rambunctious" ways, but with an intense, feral energy that leaves them even more conflicted and fearful after it's spent.

When Max lashes out, it's a little shocking, not because we've never seen it before, but because the emotions that drive him remind us of our own long-buried childhood experiences. His issues stem from his own complicated family relationships. He loves the people around him, but his young emotions are complicated by his worry for their sadnesses which he cannot fix, and his rage at the complexity of his own place in their lives, and in a world where things aren't fair and the sun will one day die. Max is confused by his own anger, as if the choices he makes are inexplicable to him. You don't have to be ten years old for that to feel real. 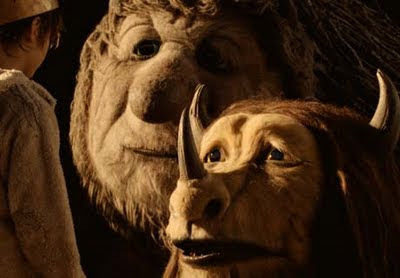 When the Wild Things misbehave or simply express their own neurotic impulses badly, it also feels weirdly familiar. If you don't know someone in your real, adult life who can be represented by just about every one of the Wild Things, then I suspect you don't know very many people. More to the point, if you don't recognize significant parts of your own personality in each of the characters, I don't know. Maybe you're just more well-adjusted than I am, but there's also the possibility that you might be living a somewhat unexamined life. If you are open to the experience, I think Where the Wild Things Are presents a rare opportunity to examine that inner self.

Is it the book? No, it's not. If you are wanting to see the book, Where the Wild Things Are is not your movie. (Although really, the good news for you is that the book didn't suddenly cease to exist the day the film opened.) Like the best adaptations, the film takes a starting point from the book and becomes something alive and relevant in its own right.

For little kids, the ones for whom the original book is age-appropriate, this film probably isn't a good choice. Not because it'll be too scary, I don't think (except for one or two sequences, if your kid is especially sensitive), but because it is probably a little more introspective than they are looking for. The Wild Things might be cool monsters, but they're still mostly just talking things out.

Kids who are a little older may take to Where the Wild Things Are, however, in ways that may surprise parents who might fear that it's too dark. If I'd seen this movie when I was ten, I think it would have resonated with me like crazy. It certainly did now. 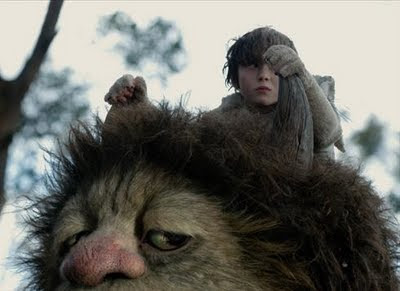 I was wondering how such a short book would be transformed into a full length film. It was one of my favorites as a kid - I had lost in the cobwebs of my kid memory how my mom used to tell us "I'll eat you up, I love you so" until I saw the previews. No kids here, so I probably won't see it with any, but I do think I'd like to check it out. Thanks for the insight.

I can't wait to see it with my boys--thanks for the thoughtful review.

Thanks for this! I was already going to see it but now I have some things to look out for.

I think it's always important to remember what it felt like to be a child, for so many reasons.

That's interesting, I have been wondering whether this movie will be appropriate for my son, so what you have written is very helpful.
Although my son is non-verbal, I have been looking for things that we can "talk about" in terms of emotions. Thank you.

How it works said...

expecting more of these from you...

Thanks for the thoughtful review of the movie. Anytime a story in a book has to be made longer to fit the length of a feature film, I wonder about what they choose to add. I'll hold off taking my 7 and 8 year olds till after I watch it.

i took my two four year olds last night (hey you let your kid watch some age questionalbe things!) it was cool how that got the emotions and why mad/sad/happy etcetera. however they both said it was too scary. but what surprised me was the part that was too scary... when max runs away from his mother. it was interesting to see them actually watch a movie that was all bright colors lights and fast talking heros. i find your review spot on. mb

I guess you mostly know my now that the film is based on Dave Eggers' novelisation of 'Where the Wild Things Are' rather than the Sendak original. There was, for a brief time, a fur covered edition available - which looks incredibly cool.

Anyhoo - that review has really whet my appetite and I think my five year old may just about be ready...

Yeah, Julie's reading it right now, and I'll start as soon as I finish reading something else for the book festival.

ummm just re read my post. re: four years olds. I meant to say it was interesting to see them watch a movie that was NOT all bright colors and fast talking heros. mb

This so called adult just saw "WTWTA".I loved it. I thought it did a pretty fair job of amplifying and extending what the book began.

one of the main things that make this movie seem less "child-like" was the actors they chose for the voices, especially James Gandolfini (because he's from the Sopranos)

I just saw this movie and came back to this review, and it expresses the movie so well! I saw myself in all of them, and see everyone I know in them, too. I'm still digesting the movie. I must admit I felt teary throughout the entire thing. I just think we all remember being a kid and feeling so explosive with saddness and anger...anyway, spot on with the review, when I first read it, it made me really want to see the movie.

I avoided this review before going to the movie - after reading the part that confirmed for me which of my sons to offer taking to see it - and came back today to read it. I agree with you. I think they did a great job. We forget sometimes how very complex children are, and the depth of their emotions. I loved it, esp. as the parent of a boy about Max's age (in the film). What I was also struck by was the fact that Max essentially took on the role of a parent trying to keep it all together and keep all of the Wild Things happy (which was their hope and expectation of him) and how impossible that was. I loved the moment at the end when his mom closed her eyes and he gazed at her; I think that in addition to knowing himself better, he understood her better after trying out the role of "king" for a while. Loved it.

Bob and Terry... they really get to the heart of things, don't they.