The first (and most crucial) parts of Schuyler's Halloween costume arrived in the mail yesterday.
When we began the whole "What do you want to be for Halloween?" dance this year, we assumed it was going to be the same "Fairies vs. Mermaids" struggle we go through every year. (Fairies! Mermaids! WHO WILL TRIUMPH?!?) Both present problems that go beyond just "Really? Again?" For example, good luck finding (or assembling) a fairy costume in which your sweet innocent child doesn't end up looking like some fetish-specializing hooker. And mermaids? No feet. Have fun hopping from door to door like that. Also, again, mermaids don't typically wear a lot on top, you know? No feet, and boobs. It's a father's worst nightmare. Nine year-olds shouldn't be sexy, my friends. They really shouldn't.

This year, Schuyler surprised us by agreeing, very excitedly, that she should go as her beloved Amelia Earhart. This new hero thing began last year, when she was assigned an oral report on a historical figure for school. From the list she was given, Schuyler picked Earhart (with some help from us, I confess -- does the world need another little girl who wants to be Princess Diana?), and ever since, she's shared that little report on her device with anyone who'll listen. So if you've met Schuyler in the past year or so, chances are you've learned a little somethin' somethin' about her hero.

In an interesting bit of serendipity, we recently learned (the quaint old fashioned way: via a television commercial) that there's a movie coming out in a few weeks about Earhart, starring Hilary Swank. So things are going to be all about Amelia Earhart around here for a while. We might get sick of it eventually, but for now, Tinkerbell has taken a back seat to an actual admirable historical figure, and one whose personal philosophy, like Schuyler's, might best be summed up as "You say I can't do that? Fuck you."

We'll actually be at the Texas Book Festival on October 31, so I have no idea what we'll be doing vis-à-vis Halloween, but at the very least, the chances are excellent that if you attend my panel, you'll get to see Schuyler in full-on aviatrix mode. 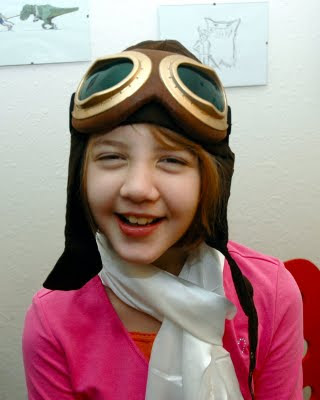 I must commend her on her choice- Pure awesomeness!

What a smile! She's such a cutie. I agree with Donna that she made an awesome choice.

Any chance of your blogging her report?

Oh my God, that is just awesome. I think I've said it before, but she kind of looks like Amelia -- at least the Amelia I had in mind as a girl.

Amazing!! I completely love it!

How perfect is that?

Perfect! I loved Amelia at her age, too. She was a hero to anyone who was like "Really? Watch me."! The movie is supposed to be phenomenal. That pilot hat is great!

Ohh awesome! I did a report on Amelia Earhart when I was about Schuyler's age and dressed up like her as part of my report. Amelia's very cool!

You and me both MsJess! :) I remember being so proud of my homemade Amelia get up.
(I know it won't actually happen but) we should all find photos of our childhood Earhart costumes and share with the class. ;)

Totally cool, and brings back memories as others have shared. I was Amelia Earhart for a school report once, and have been fascinated by her story ever since. I recently read a "Promised the Moon", which is about the first women in the space race. Maybe next year she'll be an astronaut (now THAT was a cool costume, too!).

Love the goggles! May she end up a fan of steampunk, as well. XD

Dude, how did Schuyler age 5 years in the four months since I saw her last?

Thanks for your witty dissection of popular little girl costumes and how they tend to sexualize in the worst ways... no feet, and boobs indeed! Our flip side, my 9 year old comes up with these highly technical construction projects for mom every year- headless person, giant headed cyclops. This year, the Mona Lisa... wish me luck...
-e-

She looks so cute! Did you know that A.E. designed a line of ladies' sportswear, swore a lot and had a very open marriage?
And I don't know of any dads who are comfortable with their daughters' sexuality.

Dude, she's nine. It's not particularly relevant just yet. Give me a few years yet.

Humm. Seems a little tame for a Halloween costume. Couldn't she at least pour some fake blood over her head and go as Amelia Scarehart?
No boobies involved -- just gore.