Schuyler & Jasper
Originally uploaded by Citizen Rob
Tomorrow morning, we are going to take Schuyler to the airport, put her on an airplane and send her to spend the weekend with my mother in Odessa. She'll be flying by herself.

No, my blog didn't get hacked. This is really me.

It all started with an out of town meeting that Julie and I had scheduled, one that Schuyler would find crazy long and boring. We began by looking for someone to watch her for that meeting. It wasn't long, however, before we started talking about the forbidden topic, maybe not to all parents but certainly to those of kids with disabilities.

Taking the whole weekend away. Just the two of us. No Schuyler.

It would be the first time we've done that for more than a few hours, in the nine years since Schuyler was born.

The thing is, that's been in part because we didn't have very many options for watching her, but truth be told, we didn't really look very hard until now, either. Even now, when I think about it, all the old whispers return. What if something happens and you're not there?

What that mysterious "something" might be is unclear. She's not had any seizures that we're aware of, and she self-regulates her diet pretty well. The one scary choking incident she's had in the past six months was 100% entirely my fault, in fact, and it couldn't have come at a worse time, in front of my whole family. I think it put the fear of the "something" in them, too. My mom is a little nervous, but after we talked about it, she was game to give it a go. I'm really happy that she's going to get a chance to know Schuyler a little better; if something ever happened to Julie and me, she's the one I'd want to take care of Schuyler. I can't imagine it would be any harder than raising the nasty little shit of a son that was me.

Putting Schuyler on a plane shouldn't bother me as much as it does. The procedure is pretty much the same as when dangerous prisoners are transported, I suspect. I will walk Schuyler all the way to the gate, where she will meet the flight attendant who will be charged with taking care of her. The flight attendant will walk her onto the plane while I stand and cry like a little girl, and I will be required to stay until the plane actually leaves the ground. (As if I wouldn't be there anyway, my face squooshed up against the glass.) The flight must be direct, with no connections, and the retrieving party must be waiting at the gate when she arrives. Schuyler will be handled with as much attention and care as Hannibal Lecter, although I suspect she'll bring better snacks.

When we originally bounced this idea off of Schuyler, we watched her very carefully to see if she reacted with any kind of hesitation or fear. We should have known better. She expressed instant excitement about the idea and has been asking about it for weeks. Her only concession to even the slightest indication of nervousness was her insistence that Jasper accompany her on the flight. Jasper always flies with Schuyler.

The day we told her about the possible trip, she went to her little chalkboard easel and drew three faces. She'd drawn them often enough that I knew who they were. The face in the middle was smiling, while the other two had tears running down their faces.

She indicated that the one in the middle was her, happy because she was going to see Granny. And the other two? Julie and me, of course, crying because we were sad at her departure.

"Waaah!" she said, pointing at us and laughing.

The next morning, she'd replaced our portraits with a drawing of an airplane. 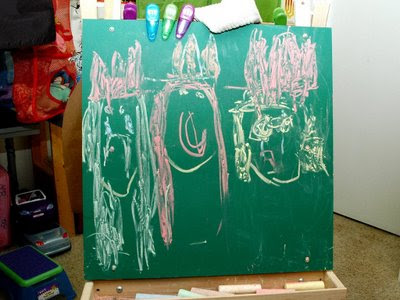 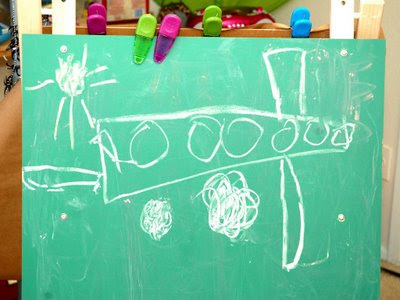 Email ThisBlogThis!Share to TwitterShare to FacebookShare to Pinterest
Labels: schuyler, shepherds of the broken

Oh, how Schuyler makes me laugh. I hope she has marvelous fun! You HAVE told your mother to be patient with her and allow her time to communicate?

I've posted before, but you have so many people ;-) that you might not remember. I'm deaf, and so I know how going to relatives' can be, when they forget to be patient.

I'm also an U of Washington student, and I've told so many people about your book/blog! I'm in an "development of communication in exceptional children" class this quarter and it's SUPER awesome because it's so fascinating how people learn to process language. The "exceptional" part just refers to "different" kids... haha.

So I kept bringing up Schuyler in class and bringing up bilateral perisylvian microgyria (Um... I see why you call it her "monster".. way easier to say than that!)

I won't be surprised if they start assigning your book in some classes at UW.... :p If they do, I'll let you know!

And I thought I couldn't adore her any more than I did 5 minutes ago! We were just daydreaming about the forbidden topic this afternoon, but it has only been 3.5 years for us....you guys must be losing your shit. I would/will be.

It's a testament to your parenting that she's such a well adjusted kid.

"You HAVE told your mother to be patient with her and allow her time to communicate?"

Yeah, I'll bet Rob's mother knows that already. She's Schuyler's grandmother! That was kind of a jerky thing to say.

Rob, I hope your mom doesn't read your comments.

I have a feeling the flight attendant won't want to let Schuyler go...maybe she'll spend the weekend with your mom too--then fly Schuyler back home.

Oh, this post tugs at my parental heart. I'd feel that way, too, but it's great that she has the confidence to do this alone for a while. And have a great time with Julie! When you return, I see Chick Fil a in your future! :)

This brought tears to my eyes...the airplane pic says it all, eh? I hope you all have a wonderful time with this rare opportunity...a gift, really. Here's to taking a chance on having some time alone...you and Julie deserve it. Schuyler will be full of things to tell you once she gets back! ENJOY!!

Rob, I hope your mom doesn't read your comments.

I don't know about the comments, but I know she reads the blog. It's okay, she's tough, she can take it. My mom reminds me of Schuyler more than any other adult does, even Julie.

I'm excited for you guys! KayTar is only 4, but we haven't ever both been away from her either.

Schuyler is awesome. I love the pictures.

Methinks Anonymous hasn't dealt much with grandparents, LOL. Or maybe her/his parents don't need a gentle reminder every now and then that some rules ought to be followed, even with beloved grandkids. I can so totally see my mom forgetting everything I told her in her excitement. It happens, you know.

Congrats to Schuyler and especially to you guys for having the nerve to let her go. My kids have spent tons of weekends with family over the years, but our family is close enough that we could drive there in an hour.

Schuyler, you crack me up! Rob, I totally know where you are coming from. Ayla (almost 4) has never been left with anyone. I have never had a night without her.....mainly because my friends screw their faces up at the thought of actually having to spend time with her alone.

Take heart from the fact that Schuyler is so darn excited and will be blowing raspberries at you from the window of the plane!

Rob, I'm LMAO here, not at your separation anxiety (my youngest is 16, and I'd still be freaked) but because she's inherited her father's sense of humor. she's going to do fine, I bet Grandmom is going to do fine, and Schuyler knows all this, but shes yanking your chain, cuz thats what kids who have such great parents do when they have been raised with such love and encouragement, and she has great self esteem & confidence. have fun! Maire

My kids are grown now so we're past the point you are embarking on but I am very glad for you and Julie and for Schuyler that you have reached this point. It's hard for parents under the best of circumstances but, as a parent of a child with epilepsy, I know it can be harder when circumstances are not ideal.

Still, I think it is the job of a parent to make one's self obsolete as much as possible. Independence and confidence are wonderful gifts and there comes a point when independence requires allowing your child to be in a different environment despite the butterflies in your own stomach.

I am wishing for you today that Schuyler's humor and confidence help you now---and let you truly enjoy the weekend with Julie without obsessing about her. (Ah, the occupational hazards of parenthood!)

Schuyler has a wicked sense of humor. I love it.

Do the three of you wear crowns/tiaras every day or only on portrait day?! I love the drawings! Have a great time. I'm sure Schuyler will!

Hope she'll have a fantastic trip and you and your wife can relax and enjoy your time together.

You and Julie need time alone. When my kids were babies my MIL would take care of them while hubby and I went into NYC and did all the things that you can't do with kids. We stayed at the Plaza, saw Broadway shows, ate in four star restaurants and hung out at jazz clubs in Greenwich Village. We had so much fun that I didn't want to go home. The kids got to know their grandma better and we were relaxed and happy. Kid-free weekends are good for your marriage. You're going to have a wonderful time.

Wow. Let us know how you all get on. I'm curious to know how the flight staff will deal with Schuyler's device. (What about the "no electronic devices during take off and landing" rule? Does that apply to essential disability equipment?).

My cousin, now 11 (and with no health concerns other than asthma), has flown here to Ohio from Atlanta to visit her extended family, and I always thought how terrifying it would be as a parent to put your kid on a plane without you.

Schuyler, I'm sure, is going to have the time of her life. You will worry because that's what you're supposed to do, and at some point she will miss you (for at least a minute or two), and then the reunion at the airport will be all that much more meaningful. Hope you and Julie get to enjoy yourselves a little too.

She'll be fine, and will benefit from having parents willing to let her do things on her own.

I hope you're surviving the weekend ok!! I'm sure Schuyler's having a blast. :)

I love her plane-- it's obvious she's raring to go.

I hope the weekend went well!

It's not such a jerky thing to say.
I'm 22 years old and I have a moderate to severe stutter.

I'm constantly hearing 'Slow down', 'think about what you want to say', 'take your time' or 'relax' and she almost always attempts to finish my sentences.

All of which just embarrass me, remind me of my stutter and serve to make it worse.

What *Tasha* said was not a jerky thing. Just something some people think about.

Thought of you and Schuyler as soon as I saw this! :D

I hope you enjoyed your weekend - you and Julie deserve some time for yourselves!!!

WAAAAAaaaa!!! - that is awesome.

Have you taught her the Simpson's Nelson laugh? HA-ha!

We have that same nubby teddy bear. He is very special to us.

**glad the trip was a success**