REVIEW: Houston, We Have a Problema

In the interest of full disclosure, Gwen is a friend of mine. But that wasn't always the case, and by the time we become friends, I already knew she was a good writer.

I'm not much of a critic, certainly. I've written a few reviews for Amazon, but there are two things I won't do where reviews are concerned. I won't write a bad review at all, first of all. I've experienced the fun of reading a review and hoping it won't rip apart my book, and I'd never dream of contributing to another author's anxiety. But I also won't write a good review for a book I don't like.

I've been sitting on this book for a while because I'm a crappy friend when it comes to following through on things like this. Well, what are you going to do?


Houston, We Have a Problema
by Gwendolyn Zepeda

A good read that transcends genre
***** 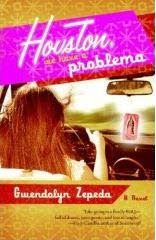 Gwen Zepeda's novel Houston, We Have a Problema is bound to be pushed into some pretty narrow genre categories -- latina chick lit, perhaps -- which is a pity, because Zepeda has written an engaging and fun work that transcends its regional and cultural environment and is quite simply a well-written and entertaining piece of work.

Jessica Luna is a single twentysomething standing on the edge of change. She finds herself confronting the prospects of changing jobs while at the same time hurtling towards decisions that must be made in her dating life, romantic choices that seem to mirror her career in flux. She jockeys for promotion at an insurance company job that she finds unfulfilling even as she dreams of a career in the art world. At the same time, she teeters between Jonathan, the successful Anglo executive who represents safety but also a step away from her passion and her culture, and the temperamental artist Guillermo, who frustrates her with his unreliability even as he haunts her on a visceral, emotional level. Jessica's superstitious nature leads her to consult Madame Hortensia, a pragmatic fortune teller whose guidance mostly serves to turn her gaze inward. Jessica Luna will find her own answers, if only she can learn to trust her heart.

Houston, We Have a Problema reads like good solid chick lit, but Zepeda delves into topics of race and family dysfunction that give the novel an unexpected depth. It does so, however, with subtlety and humor, and most of all with nuanced, believable characters. This isn't a book I would have naturally gravitated to, mostly because of the genre, but to have missed out on this charming story would have been a real pity. I've been aware of Gwen Zepeda's writing for a while, but with Houston, We Have a Problema, she now has my undivided attention.
by Robert Hudson at 11:58 PM

Rob instead of a crappy friend it could just be that you're a slacker flunky.

Hmm... maybe crappy friend is better after all.

Miss you and the family buddy.

I'm like a living, breathing Dorian Gray picture for everyone else in this family.

I wanted to leave a comment on the prior post but couldn't. Just wanted to say that the pic of you and Schuyler at the airport upon her return is the cutest thing EVER...look at your expression...

Thanks, Lisa! (I really should go back and read older comments if they are like this.)