The Price of Things

Tomorrow I do the thing I hate doing the most. I say goodbye to Schuyler again.

We've done this before. We've been doing this for the past year. More than a year, actually. Schuyler lives here in Virginia with me, and then she returns to her mother in Michigan. It started out as an even split, but as Schuyler has continued job training in preparation for reentering the workforce, Virginia has become more of a permanent home for her. After she returns to us, she'll begin actual employment, and her residency in Virginia will be mostly full-time.

In other words, I have no cause for complaint. And furthermore, I actually have no complaint.

This time, however, the rotation contains a little more bite, because for the first time in her almost twenty-two years, she will not be spending Christmas with me--or her birthday, for that matter. And again, this is fair and equitable, and I have no complaint.

The lesson for Schuyler in all this is also the lesson for me. You can strive for anything you want, but not everything. You can make choices, and some of them are audacious and bold, but they all come with a price. You can set out for a happier, more authentic life, but you'll pay with the detritus you leave behind. You can marry the most wonderful person of your dreams, but they might have their own detritus from their previous marriage, and now you own part of that scene, too. You can move across the country to something better but then find yourself employed in a field about which you have much to learn and won't necessarily get paid sufficiently. You can make big changes and not regret them for a moment, but you also have to pay the price of those things.

Most of all, you, or rather I, because let's not pretend I'm talking about anyone else, but yes, I can bring Schuyler along with me, I can begin this adventure and this happier, more authentic life with my loyal and loving daughter at my side. But not all the time. I do the thing that is hardest for me; I say goodbye and put her on a plane. I feel most acutely the empty space in my soul until the day comes when I return to the airport and await her epic, bone-cracking hug and feel whole again.

The irony is that I moved here to be with Adrienne because I needed her in my life to feel whole again, and to hopefully help her finally feel complete again as well. To make that happen and still be a fair person and not a monster, I pay by sending Schuyler away so that the other person who depends on her love and her loyalty does not wither away from my selfishness.

I'm trying. I promise, I really am. 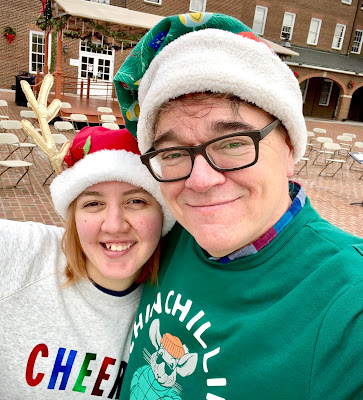 You are a good man Rob, and Skyler is clearly going to exceed all expectations.