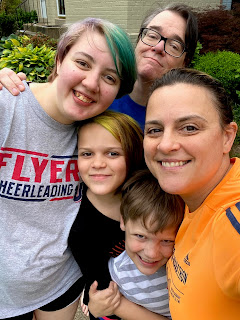 I'm sorry to hear about your divorce, and I wish you all the best in the next chapter of your life.

I don't know if you like poetry, but I personally love this one to describe the end of a relationship, and your description of the end of your marriage reminded me of it:

Failing and Flying
By Jack Gilbert

Everyone forgets that Icarus also flew.
It's the same when love comes to an end,
or the marriage fails and people say
they knew it was a mistake, that everybody
said it would never work. That she was
old enough to know better. But anything
worth doing is worth doing badly.
Like being there by that summer ocean
on the other side of the island while
love was fading out of her, the stars
burning so extravagantly those nights that
anyone could tell you they would never last.
Every morning she was asleep in my bed
like a visitation, the gentleness in her
like antelope standing in the dawn mist.
Each afternoon I watched her coming back
through the hot stony field after swimming,
the sea light behind her and the huge sky
on the other side of that. Listened to her
while we ate lunch. How can they say
the marriage failed? Like the people who
came back from Provence (when it was Provence)
and said it was pretty but the food was greasy.
I believe Icarus was not failing as he fell,
but just coming to the end of his triumph.

I'm glad I still have your blog in my RSS feed so that I get the occasional surprise updates like this. I'm glad to hear that you and Schuyler and Julie are well(ish), and that you're all doing the best you can.

I am sorry to hear about your divorce, but I am very glad that both of you are doing your best for your daughter.

Where does the time go?

Glad you finally found what you’ve been looking for. Turns out it was under your nose all along.
Anyone who has read your book cannot be surprised by this ending.

Much love to you all.

As a fellow Northern Virginia resident, welcome to the DC area! I hope you're enjoying it, as much as anyone can enjoy anywhere in these COVID 19 times. I hope you're all doing well.

A few things:
1) is that a University of Dayton shirt that Schuyler is wearing? that's....odd ('97 grad here)
2) my wife and i tend to live by the mantra "we made the best decisions that we could with the information we had available at the time." it doesn't make things better, but it makes helps me at least sleep (sometimes)
3) parenting is really hard, special-needs parenting can either draw people together or throw them apart very very easily. it can be like a married couple divorcing very suddenly after many many years once they become empty-nesters.\
4) i really have nothing of import to say, just "dang it Rob, get OUT OF MY HEAD"

Rob, I am sitting on my couch in Prospect, Ky finally reading the book a speech therapist friend of mine gave me probably 6 months ago. Hesitantly, I decided to try it because I've been diagnosed with Covid and what the hell else can I do? I was texting her in the beginning that I was pleasantly surprised by how much I liked the beginning because of your perspective and sense of humor. As a fellow "special needs parent" I almost spit my coffee when I read the Holland chapter. And the part about the macaroni name artwork. I actually DID spit my coffee when I read Schuylers diagnosis. My daughter has polymicrogyria!! (Diagnosed by Dr. Dobyns in Chicago) I texted my friend and asked her if she knew when she gave me the book. She didn't. I've never known anyone else with the same diagnosis. Most of our healthcare specialists don't seem to know what it means, either! I am so freakishly excited to finish your book now. And Thank you. Thank you for describing exactly how I have felt. And telling your story. And introducing me to Schuyler. My Olivia is 16. Im excited to share Schuyler with her.