On Competency and Agency

One of the concepts you see referenced frequently in disability writing these days is to always presume competence. It's a straightforward enough principle, and in the world of disability, it goes back farther than you might think, back before most of us even think of disability advocacy being A Thing.

Think of the story of Helen Keller and Anne Sullivan. Sullivan's success in helping Keller develop the means to communicate with the world hinged on one simple thing: the presumption that Helen Keller's problem came from not having a practical and efficient way to communicate. Introducing her to the construction of language was the key. Given those tools, Helen Keller demonstrated that she had competence, the presumption of which hadn't occurred to many of her earlier teachers.

Presuming competence is the beginning, particularly where education is concerned. For teachers, the presumption of competence should be the Golden Rule, or the Prime Directive, or Square One. When we presume competence, we start off by assuming that a student has the intellectual capacity to participate in the world around them, and to be educated in a meaningful way. We assume that even the most physically and/or intellectually impaired student has needs and thoughts and experiences to communicate, and that even the most inscrutable actions and utterances represent forms of communication.

It can be difficult for teachers to embrace presumed competence because doing so places the responsibility for finding ways to reach those students squarely on those charged with educating them. Faced with large class loads and challenging students, it can be tempting for teachers to declare that some individuals simply cannot learn, and whose limited participation in the world is self-imposed. I've heard some very good teachers make those statements before. I've watched otherwise professional people decide that they've found that ceiling, and who are confident enough in their own teaching abilities that they believe further development can't happen.

The issue of presumed competence is something that every special needs parent runs into, and not rarely. It's tough, but it's important, maybe the most crucial piece of the very complicated equation. And it informs everything we do in our quest to correctly implement inclusive education. We don't set out to discover who is capable of learning or participating. We instead search for how that can be done, for every student. For every human. It all starts with the presumption of competence.

The tricky reality of presumed competence has come up over the last year in regards to Schuyler's school environment, but lately I've been thinking about this because of something that happened outside of the sphere of her education, actually.

The short version involves someone who was, I don't know if "offended" was the right word, exactly, but certainly troubled because when discussing Schuyler's possible future relationships, I referred to "that boy or that girl". (All hypothetical; as far as we can tell, Schuyler currently seems to be fixated on boys, albeit some punky ones.) The commenter asked, wouldn't supporting Schuyler if she did ultimately decide she wanted to date girls be another way of making her life more difficult? And in the subsequent discussion, the same commenter mentioned her concern that Schuyler's religious beliefs "mirror" those of her parents.

Leaving aside the twin bugbears of homophobia and religious intolerance that the discussion summons (being the Internet, it feels almost inevitable that they should make their appearance), the thing that bothered me the most was this idea of presumed competence, and of Schuyler's ability to take agency over things like her spirituality or who she wants to date. (As if her sexual orientation is something that she'll "choose" one day, but OH MY GOD, DON'T TOUCH THAT DOOR, WE'RE NOT GOING TO TALK ABOUT THAT HERE, EITHER!)

Schuyler is developmentally disabled. You can word that however you like, but it's her reality. It makes some things hard for her. It necessitates her taking more time in school, and it also requires her to take some complex concepts, and I think dating and religion qualify, and simplify them to some extent.

That doesn't change much, though. It is very clear that Schuyler knows what she believes. If her beliefs mirror ours (and that presumes that my wife and I believe the exact same things, which we do not), I'm not sure what that says. It certainly isn't because we tell her what to believe. We've had long discussions about what other members of our families believe, too, so she knows that her parents' beliefs are exceptions among both the Rummels and the Hudsons.

Furthermore, she attends school in one of the most conservative and bechurched cities in the country. I'm proud of Schuyler for declaring she doesn't believe in God, not because that's what we want to hear from her, but because she has the confidence to say so in defiance of what so many around her believe. If her parents influenced her, I suspect we did so chiefly in demonstrating to her that it's okay for her NOT to believe. That can be hard for a kid, particularly in such a predominately Christian society.

And if she changes her mind, which as a fourteen year-old she is almost certain to do at some point, I will be equally proud of her.

Because Schuyler is competent. And every day, in ways both large and small, we watch her take more agency over her life. 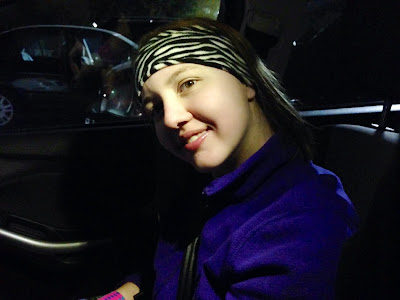 I remember when Julie mentioned a future boyfriend or girlfriend or partner-in-crime, in a video years ago -- maybe book promotion? -- and it has always, well, warmed my heart, to use a very cheesy phrase. To me, the fact that both of you have not assumed your daughter would only date boys is a prime example of Good Parenting.

As always, your writing is poignant and gets to the meat of the issue. In addition to the trouble of not assuming competence in all areas of life, realizing that education is not intended to be a stand alone world apart from the "real" world, but rather an integral part of being a participant in the world as a whole, I was troubled by the comment on the level that you would do something for your daughter to "make life easier" at the cost of her independence. If you made all decisions based on what was easiest for a child, and not just your child, but any child, they would never become independent, problem-solving, decision-making adults. It is simple to think that it is "easier" to make decisions for your child, but as you rightly address, it is not so, especially with big and defining topics as religion and sexuality. I think many parents could take a lesson from your approach and realize the goal of parenting is not to get through the day and get from place to place, but to give your child the opportunity to be a person.

I just found your blog and thoroughly enjoyed this article. As a teacher myself, it breaks my heart to see any student's abilities limited by the projections of another teacher or other adult in their life. And as someone who is not a parent yet, but looks forward to being an open-minded, supportive and unconditionally loving parent someday, I really applaud you and your wife's support of Schuyler's beliefs though they may be different than yours. Keep writing, the world needs as much influence like yours as it can get!

Awesome! From a disabled person who still needs to point this out to people

Why would it surprise anyone that a 14-year-old's religious/spiritual beliefs "mirror" those of their parents? Most children's do, up until about that age anyway, whether they be Christian, Jewish, Muslim, pagan, agnostic or some other religion, non-religion, or spiritual identity.