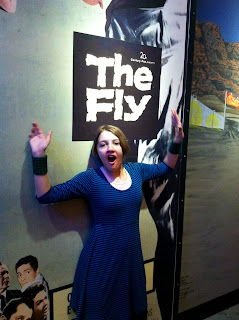 Thanksgiving can be sort of tricky for special needs parents sometimes. Christmas is perhaps a little easier, I think, only because virtues like compassion and acceptance are usually in abundance during the Holidays (the sinister War on Christmas notwithstanding). There's an element of taking stock at Thanksgiving, however, that can be challenging for special needs families most of all. We're not always on board with making lemonade out of those life-handed lemons under the best of circumstances, after all. We'd like to cut those lemons and stick them in someone's eye much of the time, really. Being told "It's Thanksgiving, goddamn it, there's always something to be thankful for, so get thanking, you!" doesn't always sit well.

Thing is, though, it's true. There is always something deserving of gratitude. It can be hard to silently endure the "We're thankful that little Madison was the top scorer on her soccer team!" status updates on our friends' Facebook pages, but we do what we always do. We recalibrate for our own lives and our own worlds. We're not lowering the bar, certainly; I feel pretty certain that Schuyler works every bit as hard and every bit as smartly as little Madison, and gets handed lemons that would crush Madison's mom's minivan like a bug.

Thanksgiving for our families is different from that of the neurotypical family. And perhaps it's exactly the same, too.

Parents of neurotypical kids probably don't express gratitude for their child's ability to speak (some of them very much do not, I suspect), but this year, I am thankful that Schuyler has made such great strides in communication that her garbled but improving verbal speech, her sign language, her AAC device and her Advanced Mime School techniques have allowed her to succeed in her new school beyond our expectations.

I'm thankful that Schuyler's hunger for independence and The New has served her well in middle school. She gets overwhelmed, to be sure, and she screws up frequently. But her teachers seem to understand that making those mistakes is good for her. Schuyler has stumbled a lot, particularly in the past few weeks. She is definitely ready for a little break, I think, and a chance to regain her focus. But there is a lot about middle school that neurotypical kids don't necessarily have to constantly work to master. I think the time will be here soon when Schuyler won't have to work so hard to navigate those obstacles, either. For that, I am preemptively thankful.

I'm thankful that Schuyler's brain seems to be messing with her in small and manageable ways. The maybe-seizures that may or may not have been tormenting her last spring have maybe returned a time or two, maybe maybe maybe. (Stupid inconclusive, ill-timed EEG; we'd love to try again, but our money-tree seems to have developed root rot.) It occurred to us a few weeks ago, when Schuyler maybe had a maybe seizure in our maybe living room, that she may very well be having them regularly, but has simply adjusted to them and compensated for their effects. Maybe. I know many parents for whom seizures are the cause of constant vigilance and anxiety, and I also know parents who have buried the kids that seizures took from them. Of all the things I am thankful for this year, the relatively kittenish qualities of Polly (as Schuyler refers to "the little monster in my head") are probably the most heartfelt.

I'm thankful that Schuyler can self-regulate her diet and is at a low risk for choking now. I'm not sure how many parents are thankful that their neurotypical kids can eat, but I am. I'm thankful that Schuyler has incorporated punky cool wristbands into her fashion style so that she can discreetly deal with her occasional drooling. I'm thankful that she is finding her way to navigate through the world. I resent the fact that the world has so little space for kids who are different, kids like Schuyler, but she doesn't seem to share that resentment. She simply adjusts, without shame but instead with a matter-of-factness that seems to minimize her difference by owning it with as little drama as possible.

I'm thankful for Schuyler's independence, and for her positive attitude as she makes her way in the world. That's no small thing. No one can predict what kind of adult Schuyler will be, but I don't think she's on a pathway to bitterness and resentment. She's always behaved as something of a self-appointed ambassador between her special ed classmates and the neurotypical kids in her mainstream classes. Schuyler turns twelve next month, which I think is probably old enough to start considering a lot of her personality traits to be hard-wired. I see in Schuyler the beginnings of a community builder, a positive force for whatever she chooses. I'm thankful for the young lady she's growing into.

I'm thankful for the friends who have been so supportive of Schuyler, particularly the two who will take over her feeding and watering and occasional hosing down in the unlikely event that Julie and I should perish together. (Or murder each other; don't rule that out.) Ask any special needs parent what keeps them up at night, and they might very well answer "What would become of my kid if something happened to me?" Having the beginnings of a plan in place represents a great deal of peace of mind for us. I'm also thankful to have a good job with a big-hearted boss and the flexibility to take care of Schuyler when I need to. That's also an amazing thing to be able to say. I'm grateful to everyone who has kept Schuyler in their hearts and yes, their prayers, over the years.

Finally, in a weird way, I am also ever-so-slightly thankful for Schuyler's monster. It's a motherfucker, to be sure, but it has put some obstacles in her way, and in ours, which have made us all better people in the overcoming. It has helped to make Schuyler who she is, although as I watch how hard she works against it, I would still take it away from her in an instant. I can guarantee that we pay closer attention to Schuyler when she's trying to tell us something than most parents of neurotypical kids, out of necessity, but a funny thing happens as a result. In watching Schuyler closely and in listening for her inflection, we are rewarded with an intense intimacy in our interaction. In waiting for her to form more complicated thoughts on her AAC device, we develop a kind of patience that I can't imagine is paralleled in neurotypical parenting. As a young child, Schuyler's internal world was a place that was mostly inscrutable to us. The older she gets and the more clearly she communicates, the more we get to explore that weird and wonderful world of hers.

Some of her walls have transformed, through her hard and often frustrating work, into windows. A few of them have even become doors. And for that, I am truly and unshakably thankful. 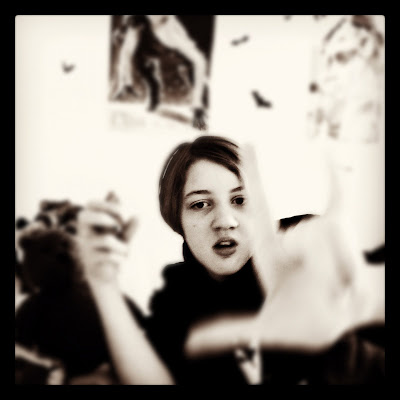 This was perfect and spoke for many of us also waging the war.Our battles and monsters may be different but we stand in unison, fighting the good fight. Or at least trying.

Thank YOU, for this.

Wonderful, heartfelt and inspiring post, Robert. May you, Julie and Schuyler have a wonderful Thanksgiving! You have helped me see being thankful in a different light, and for that *I* thank *YOU* :)

Tomorrow I will have to endure the unspoken (but very present) comparison of my 4-year-old son to my nephew of the same age. Thanks for reminding me that I'm probably a better (or at least more present) parent than they will ever be. They have no idea what a privilege it is to be the mother of this my little boy.

Hope you guys have a great Thanksgiving.

Rob, I feel like I've waited years to read this kind of post from you. It made me cry. So grateful for you sharing your journey with us.

Thank you for writing this.
Thank you for allowing us to read it.
Happy Thanksgiving to you, Julie and Schuyler!

This was so honest and heartfelt and truthful, it made me cry. Thank you for writing this, and thank you for sharing Schuyler's journey with us. We all have a lot more in common than we are different.
Happy Thanksgiving Rob and Julie and Schuyler!

Happy Thanksgiving to the Fighting Monsters clan! Many blessings your way --

I am thankful for the writing ability of people like you, people who can take seemingly indescribable feelings and thoughts and emotions and experiences and put those into words for the rest of the world to try and comprehend and understand and appreciate. You bring tears to my eyes (and my puppy comes running to lick them away) when I read your writing.

Your words nearly always bring me to tears - this post in particular. Thank you for that.

Wow, is she getting tall and ever-more-beautiful!

I echo those who posted before - I am grateful that you have so eloquently shared your family's journey with us. You remain in my prayers - all of you. You guys are amazing.

This was beautifully written, Rob. And that last photo is so lovely.