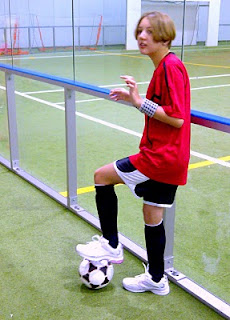 For an hour every Saturday morning for the past two months, Schuyler has strapped on her shin guards and pulled on her jersey, and joined her friends on an indoor soccer field in Frisco, Texas.

Schuyler's team is the Wizards. They've been largely the same team for two seasons now, and despite their record on the field (they lost all of their games except for two, which were ties), I hope they stick together next time, too. There are mostly small players on the team -- Schuyler was probably the biggest -- but they played with a lot of heart and their coaches really worked hard with them while remaining positive the whole time.

We've toyed with the idea of trying to get Schuyler into a neurotypical soccer league, but we went and observed some of them practicing, and it was daunting. I don't know about your town, but in Plano, league soccer is intensely competitive. I talked to some people who knew a little about those leagues, and they all gently suggested that our instincts were correct and Schuyler might just get eaten alive.

So she continues with Miracle League, but on what they call the Unified League. These teams are set aside for kids like Schuyler who are ambulatory and don't need a buddy to help them out. There's a regular league for kids who need a little help, and another for kids in wheelchairs. It's not a perfect division of the kids, as some of the other Unified players are much older and much MUCH bigger than the other kids, but it still mostly works for the kids.

Schuyler loves to play soccer. She dances on the field, and she gets mad at the big kids and gets in their mix whenever she can. She gets frustrated when her team misses a goal, and she celebrates wildly when they score. She knows that her teammates are different and is kind and protective of them. She knows that the players on the opposing team are different, too, and she's mostly kind to them as well, aside from a certain amount of posturing. In short, Schuyler plays like it means something, and yet at the same time she plays like it means nothing more than the fun of play. I'm sad that the season is over, and I can't wait until it starts up again this fall.

Sometimes I come here to talk about big things. And sometimes? I just want to tell you that my kid plays soccer, probably like most of your kids, and I'm proud of her for all the same reasons you're proud of yours, as well as for all those other monstery reasons I choose not to acknowledge just this once. 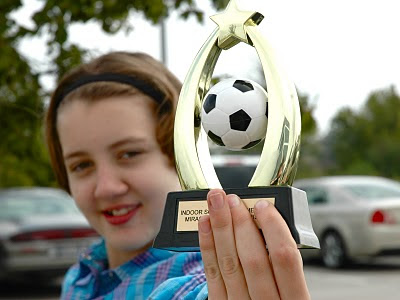 Email ThisBlogThis!Share to TwitterShare to FacebookShare to Pinterest
Labels: local news, schuyler, shepherds of the broken, the monster

Aw. That's really cool. I hated pee-wee soccer because the other kids were already really good, even at 6 years old, and I was woefully slow and uncoordinated. The other kids didn't want to be friends with a shitty player, so I cried on the field every day until my parents relented and let me drop out. I'm really glad Schuyler is having a positive sporting experience.

She looks like such an athlete in that top picture! It's great that you've found a league in which Schuyler can shine!

I'm glad Schuyler is having a good time in soccer!

My own 10 yr old just quit after the first practice (after playing for the last 5 years) because the asshole coach completely ignored/snubbed her the entire practice -- all his attention was on his own daughter and 2 "super" girls. Now mind you, there are like 10 kids on the whole team, so it's pretty noticeable!

I was actually kind of proud of her for saying (literally) "Screw it. I don't need to be ignored." :)

I kind of worry about my own (NT) kids and soccer and sports in general. (I'm a pasty nerd, so I'm not much use in that arena.) I hope my children are able to find a team and an accompanying attitude that's very similar: competitive but not cut-throat, and most of all that it's fun, not work.

Emmett will (hopefully) be playing Miracle League baseball next year, when he turns 5. I'm excited for him, but also bracing myself. We plan on inviting his grandparents to the games, but they're still in denial that they have a disabled grandchild. Worse, my FIL coaches basketball and he's a screamer. If he screams at Emmett, I might just have to kill him.

I know you hear this all the time, but Schuyler is such a great kid. I hope that Emmett has children like her on his team.

Between the pose and the hair and the lankiness, she looks like a 1930s fashion plate in that first photo!

Soccer was my son's best outlet for normal kid interaction. Fortunately here we can have kids play in either "rec" (recreational) or "select" leagues. Anyone can play in "rec" league, and really, the kids can accommodate.

Then my son with the severe, but not as severe as Schuyler, communication disorder was part of a team with actual friends. But he kept getting slower, and was having trouble keeping up.

It was then we found out he had a severe genetic cardiac disorder. A disorder to that caused a child younger than him to die just a week before, and what is the main form of diagnosis: sudden cardiac death.

Because of this soccer and the only regular social interaction he had was taken away. That took us into some dark years which included trips to a psychologist. But things are getting better, it just takes longer.

I am part way through the book, and there is a strong sense of "deja vu" (thanks, Liz Ditz!). He got the monkey with drums at his first hearing test. My son is so similar to Schuyler, but is so completely different. Just like they were completely different individuals.