Have you ever seen Office Space?

Here's an embarrassing but perhaps amusing story for you. (Before you ask, no, Schuyler was not home for this incident. It would not have happened if she had been.)
This afternoon, I lost my shit. Julie was on the phone trying to accomplish an important task with a customer service rep who seemed to be doing everything in her power to obstruct said task. She was in full-on "There's nothing I can do" mode, with that tone that suggests she wished our names were Mr. and Mrs. GoFuckYourself since that's clearly what she wanted to say. At the conclusion of the conversation, when the person had succeeded in making Julie actually cry, I needed to print something off, and at this tense, unhappy moment, our printer decided that it was no longer in the business of printing.
It was a very poorly timed print error.
So yeah, I lost it. I cursed at the printer, and I hit it. Okay, I may have hit it a couple of times, but when the flimsy shelf on which it sat suddenly gave way, that was it. Swearing dramatically and creatively, I proceeded to stomp on the printer, repeatedly, feeling it crunch beneath my feet, hearing it make a sound that, while not as satisfying as the sound of printing might have been a few moments before, was nevertheless a wonderful guilty pleasure. I lost my temper in the most ridiculous, over-the-top way, and that was that for the printer.
When I got my sudden flash of anger under control, I looked over at Julie sheepishly. "Want to join in?" I asked weakly. Without a word and with a stoic expression, she quietly stood and walked into the other room without answering.
I started to get up to follow her, to apologize for my shameful, destructive outburst, but before I could take more than a step or two, she returned from the bedroom.
With a softball bat. Which she put to astonishingly effective use.
Anyway, our printer most definitely doesn't work now. But I think we both feel much, much better. 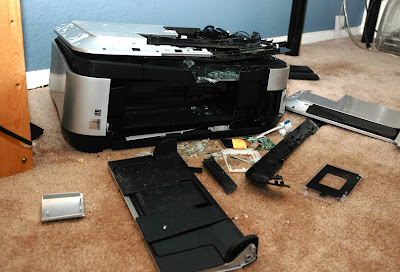 I'm sorry. That was fucking awesome. I have wanted to do that to my printer so many times over the past year, but I need it for work and I can't afford a new one.

It sounds like a lot of fun and very satisfying!

Thanks for turning the sad, angry dejection I was experiencing just now into uncontrolled laughter. I wish I had a softball bat.

You were due. It sounds like a very, very reasonable course of action under the circumstances.

You've had a lot going on. It's got to get out of there somehow, and it really looks like the printer had it coming.

Damn, it feels good to be a gangster!!

There are times when the Printer Must Pay.

What I want to know is, did you get the phone stuff resolved? And I wish boils and lesions to anyone that makes Julie cry on the phone, fercryinoutloud.

LOL! I read your post to my husband, without the title, and as I reached the end he actually said "Office Space!! Have you ever seen Office Space??!!" Word for word with your title.

Hahahaa was it an HP by chance?

PC load letter? What the fuck is that?

"Office Space" is one of my favorite movies, and that printer-bashing scene is classic! I'm glad you took your anger out on that old printer of yours - it TOTALLY deserved it! :)

Oh, that is HILARIOUS!!!! I hope you hit it and kicked it a few extra times for all the rest of us who have wanted to do that once in a while to the electronics that have SUPPOSEDLY made our lives easier!!! Grrrr! :-)

ROFL!! Best use of a ball bat I've seen in a long time!

I was having one of those weeks a few years back. Then in the middle of the night my alarm clock goes off for no apparent reason. Only it won't turn off. It is completely off the reservation loud and annoying.

I go to unplug it only some genius (that would be me) plugged it into the wall and then moved a giant dresser in front of it and now you can't reach the plug. In the meantime the clock is actually making my ears bleed.

I then beat that clock to death on the floor. It was 3 am and my wife watched silently from the bed. When I was done I looked up at her waiting for some reproach. Her only reply was, "that should do it." She then rolled over and went back to sleep.

Oh I have SO wanted to do that so many times. Congrats. I lived through the experience through you.

I'm not sure which one of you is my new hero. I'm kinda thinking it's Julie!

That must have been the most satisfying beating ever. Love it!

I probably shouldn't have laughed as hard as I did...but there you go. Violence shouldn't be funny....except when it is.

I burst out in loud, involuntary laughter when Julie came back in with the bat. I'm sorry you're both having a shitty time of it, but I'm glad you've retained your senses of humour and found an effective release for some excess negative energy. ;-)

I second the question another commenter asked: was it an HP?

Revenge of the Printer: When I got out of the shower just now, I noticed that one of my toes on my kicking foot is dark, dark purple. It's not broken, just... angry.

OHMYGOD - you're HUMAN?! Holy crap. I did not know this.

Hahahaha! I can't tell you how many times I wanted to do that to the Epson printer I had for the last few years. It made me so angry the other month that I unplugged it, put it in another room and ordered a plain vanilla laser printer. FU, Epson.

I'm sure you've probably seen this, but if not, you'll like it: http://theoatmeal.com/comics/printers

I hope your toe is feeling better.

Franky, I'm kind of jealous. I've had a week where that would feel amazing!

It also reminds me of a shirt my husband has with Dogbert walking away from a smashed computer. The caption reads "The network is down...but I'm feeling better.".

That's awesome. I do hope that that printer stood in for all the world's woes, and if so, I thank you for taking care of everything.

Hope today is a better one.

Hilarious!!! You only seen that in movies and ive neverrr heard anyone do that in real life! poor printer but i hope ur mood has recovered! funny post thanks for the laugh! :)

Since you'll be in the market for a new one (ya think?!) I might suggest a $100 HP laser printer from Staples. I just set one up for a friend and it's a sweet little thing. Mac-friendly with a sort of manual duplexing process that works nicely for very small jobs. (It's just a printer, not anything else, though...)

You and Julie are my heroes!!

I think that the key question here is why you guys have a softball bat in the bedroom...

Because we won't keep a gun in the apartment with Schuyler but we don't want to give up to home invaders without a fight.

Also, Schuyler will start dating at some point...

You are a fun couple!!! Bet it was better than good sex!

Some things just have to be done. I can relate all too well. Alas.

Have you seen this YouTube video of a cat with a British accent smacking around a printer? I think you'll like it.