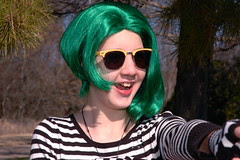 Green
Originally uploaded by Citizen Rob
One of the enduring mysteries of Schuyler is also one of the most interesting, and least quantifiable. How does Schuyler see herself? The little peeks through the curtains that we get from time to time show a little girl who simultaneously wants to be like every other little girl her age and yet is deeply in touch with her own beautiful strangeness.

Over the weekend, before the Wall of Wintery Death descended on North Texas (it is admittedly a short wall, but still), Schuyler asked me to take pictures of her. In eleven years on this planet, I do think this might actually be the first time she's ever done this. I've taken literally thousands of photographs of Schuyler, but her attitude toward me and my camera have always been ambivalent at best. One day she'll learn how to get a restraining order against me, and that will be that.

But this weekend, she wanted me to take photographs of her, and she had a very specific look that she wanted to capture, including the green wig resulting from her love of a character in the movie Scott Pilgrim vs. The World and the fingerless skater gloves that have become an indispensable part of her wardrobe. This was the look she wanted to capture, and I'll be damned if she didn't look awesome. Rather odd, and rather cool.

Schuyler had to make a college logo banner for school, for an assignment tying in with "College Week". (I'd make a remark about Plano parents already worrying about college for their fifth graders, except I suspect that is now the norm everywhere. Back in the day, I started worrying about college about halfway through my senior year, but that was probably a lack of planning and ambition all my own.) Schuyler hasn't had much interest in college, aside from the campuses where she has appeared for conferences like Vanderbilt and Auburn, so we had to explain some possibilities to her.

She eventually chose Yale ("because they helped me with my brain"), but she also decided, out of nowhere, that she wanted to go to school in China, because "it would be fun!" It was hard to argue with her logic, and she never wavered from this great idea, even after I told her that she might end up working in a factory making plastic Spongebobs for Happy Meals. She is immune to my cynicism.

Schuyler is building a very interesting and diverse self-image, one that emerges in her art and her stories and, I think most of all, in the dreams that she describes to us. It is, as it has been from the beginning, a view of herself constructed equally out of parts of this world and her own. We have a game we play now sometimes called "Real or Pretend", where I name something and she tells me whether it's real or imaginary, and her answers are surprisingly pragmatic. I was surprised to hear "pretend" when I mentioned mermaids and dragons and zombies and vampires (four of her favorites). She was delighted to learn that dinosaurs WEREN'T pretend, except when they are shown walking around in the modern world. But some of her answers were exactly what I expected, and secretly hoped for. Santa is real. Fairies are real. King Kong is definitely real.

The piece that fascinates me the most is how Schuyler incorporates her disability into her self-image. She's always identified with Ariel from The Little Mermaid, perhaps unsurprisingly; when asked why she loves this character so much, Schuyler touches her throat and then mimes the throwing away of her voice. But it's hard to know sometimes how much she wants to acknowledge her monster. She's reached a stage in her life when she doesn't want to use her speech device any more than she absolutely needs to, and when she does, she often insists on spelling out her words rather than using the icon sets.

But then she'll surprise us. The other day, while walking through a store, Schuyler saw a piece of pop art that she insisted she wanted for her room. When asked why, she mimed her wordlessness again. The art wasn't about being unable to speak. It wasn't an artistic treatise on mutism, not at all. But that was how Schuyler interpreted it, and now that it's hanging in her room, she goes back to look at it over and over. She seems very pleased with it, and with her own interpretation of its significance.

Schuyler is smart enough, and pragmatic enough, to understand that her disability is an integral part of who she is, and every now and then, she takes total ownership over it. But like everything else, she does it with style. Her own weird, wonderful style. 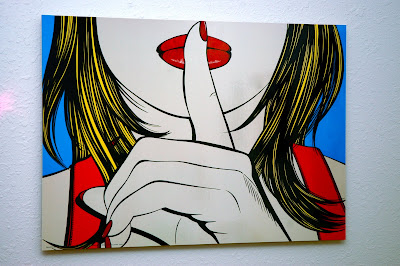 What an amazing girl she is growing up to be (and already is!)

And this is why (I believe) that she will be ok.

I kinda want to be best friendswith Schuyler =)

Wow. The art is beautiful, and very poignant. That, and her identification with Ariel. She is becoming very self aware. More than Megan is I think. I'm sure that is both good - obviously Schuyler is a very smart girl - but also heartbreaking as she is realizing her differences. I love the picture of her in the wig and gloves. She is already one very cool girl. :-) I really appreciate you sharing bits of her with us.

Wow! I am in awe of Schuyler and of your ability to notice, appreciate, and capture her essence in your writing.

Your post made me think about something my 9 year old daughter told me recently. While she uses a wheelchair and a walker while on land, she is like a fish in the pool. I often take her swimming because she loves it and it's good for her joints. When other people see her in the pool, I think they often do not realize she has a disability until she gets out into her wheelchair. The other day she told me, "I like it when other kids stare at me when I get out of the pool and they see my wheelchair. It's like, I'm different. I like being... (pause) different." Although I should perhaps juxtapose this story with another. She also wears glasses, hearing aides, and has quite visible scars on her legs. This summer, she got contact lenses. Shortly after getting her contacts (and opting out of her hearing aides for the day), she was lying on the floor in front of a mirror (and thus not in her wheelchair) and she said, "Hey, except for my scars, I look normal. I look like a normal kid."

Wonderful, touching post, Rob! I would love to meet Schuyler someday and tell her just how much I admire her for just being herself.

I love that pop art she's got hanging in her room, by the way. VERY cool!

That's a great artwork for her room...very cool. Would she be a candidate for using a traditional text-to-speech device as a supplement to her AAC?

I read a thing where Roger Ebert has a voice synthesizer that uses sounds from his old voice recordings--of course not available to people who haven't spent their lives talking on tv, but that's pretty cool.

Heather, have you read about this woman who got a prosthetic mermaid tail? Your daughter might like the picture: http://www.telegraph.co.uk/news/newstopics/howaboutthat/4839818/Disabled-woman-given-mermaid-tail-to-help-her-swim.html

It's such an amazing moment when you find a piece of art that seems made for you in some way. The fact that Schuyler is looking at art this way is an indication of how far AHEAD she is of most fifth graders in so many respects.

It also probably reminded her, as it reminded me, of her book cover--the grown-up, pop art, comic book hero(ine) version.

She is an amazing gall Rob, just amazing and indescribably herself. Who could ask for more in a child? You are a lucky, lucky man and a great father.

I can't remember if I've asked this before but is Schuyler familiar with Trumpet of the Swan? I'm sure you know it but if not, it's the story of a mute swan making his way in a world full of words. He finds his own box of words and deals with the clumsiness and elegance of communicating in different ways.

The version on audible.com is read by E.B.White who is one of history's great smartasses.

ps. This made me think of you. :-)
http://www.ted.com/talks/andrew_bird_s_one_man_orchestra_of_the_imagination.html

I want a Ramona Flowers wig too.

I just had to let you know that I just read your book and LOVED it! Am recommending it to everyone. It was recommended by another blogger and then the PRC rep that I went to see earlier this week.

I adore her green hair too. I think I need to get some of that!

Schuyler amazes me every time I read about her. She is so smart. And I wish I could rock that wig the way she does.

I think Schuy will turn out ok, emotionally. She would never choose this path for herself, but even on it she loves herself. That much is clear. That's critical.