Schuyler wasn't due until January of 2000. When she was born two weeks early, we tossed out the middle name we had chosen (Helena, in honor of the grandmother I never met; we decided to save that name for a future daughter, but Fate and its monster had different plans) and instead chose Noelle, the feminine form of a French word meaning simply "Christmas".
For the past eleven years, Christmas and Schuyler have always been inextricably connected to me. We're not Christians, but we have our own miracle baby to celebrate this time of the year. (Let the indignant emails begin.) To me, Schuyler is Christmas.
Tomorrow is Schuyler's eleventh birthday, and while it's true that every year brings a level of surprise at how much she has grown, this year feels even more change-filled than usual. She seems more complex, more understanding of the world around her, particularly the rough and ugly parts of it. And yet, when I watch Schuyler move through that world, I can see a young lady who possesses a quiet sort of confidence, and a strength that surprises me sometimes. 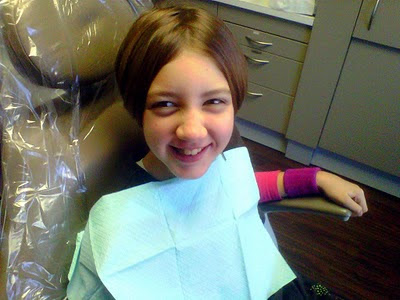 Two days ago, Schuyler returned to the dentist to finish the root canal from a month ago. Once he got into the tooth, however, he realized that he couldn't finish it. Schuyler apparently has a weird tooth, and will require the services of an endodontist to finish the job. Ultimately, she had endured another morning in the dentist's chair and another root canal session for nothing. It was frustrating.
But here's the thing. She didn't care. She didn't cry at all, didn't fuss or resist, and she kept a cheerful disposition the whole time. (The gas might have helped in that regard; it turns out that nitrous oxide makes her extremely chatty, the irony of which does not escape me.) The next day, for her birthday, she got the thing she's been requesting for about two years now: pierced ears. When they punched through her earlobes, a dark expression crossed her face for a few moments, but when she looked in the mirror, she smiled broadly and that was that.
This is the person Schuyler is becoming. She's more aware than ever of the pain and the clouds in her life, but she's also acutely in touch with the moments of joy, the pieces of beauty that are lying around waiting to be picked up.
In watching Schuyler grow into this extraordinary person, I myself am changed. It's ridiculous to say that I 'm a better person because of her. I don't even know the person I would be without her. I would be less, much much less. I would be a smaller, more shallow human being, and I would walk through the world largely unaware of those beautiful pieces waiting to be discovered. I have Schuyler to thank for that.
Happy birthday, little girl. 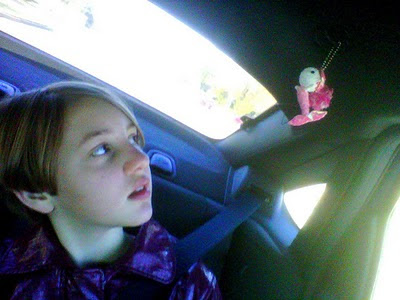 You are so fortunate to have her.

Happy Birthday, Schuyler - and thanks, Rob, for another beautiful post where you share her life with us. You are not the only person who's been touched, and changed, by this little girl!

Happy Birthday, Schuyler and the very happiest of holidays to all of you!!

Happy birthday, Schuyler!! What a sweet, sweet post about your girl, dad!

Happy birthday, Schuyler! Can't wait to see what kinds of awesome earrings she will pick out. :)

Schuyler's smiles ALWAYS make me smile.
I don't think I ever smile in the dentist's chair until they tell me I can leave.

What a beautiful post. So beautiful. Happy Birthday to your Schuyler, and happy birth day to your lovely wife.

I remember reading about Schuyler's birth on your blog and just being so very happy for all of you. Happy birthday, Schuyler!!

I'm so happy to see such a happy post when you've been more worried about the future lately.

Nothing is certain in life, you've both given Schuyler the best chance possible. You're inspiring to both her and many more parents out there.

Happy birthday Schuyler! You're an amazing young lady! I think we all could stand to choose joy like you do.

Happy birthday Schuyler! You are an inspiration. And what a beautiful tribute - way to go Dad. :-)

(Don’t) look at my
(dis)ability

Happy Birthday Schuyler! She is the beauty and the brokenness of the world, all wrapped up in one amazing package... thank you for sharing her with us.

I was just showing my daughter pics of Schuyler and commenting on how similar they are when I read this - our daughter's middle name is Helena, after the grandmother I never met. Weird.