Transfiguration, at the mall

Small amazement
Originally uploaded by Citizen Rob.
Schuyler was recently invited to a birthday party by one of the girls in her Box Class, and since Julie had to work, I was flying solo. No big deal, I do it all the time. The two of us are taking Manhattan like Muppets in a few weeks, after all. Birthday parties are cake, so to speak.

It wasn't until this morning, a few hours before the actual party, that I took note of the fact that this party was to be a Club Libby Lu party.

How to explain Club Libby Lu to the uninitiated? And unless you are a parent of a little girl between the ages of maybe five to twelve, or you're actually a little girl yourself (in which case you shouldn't be reading this blog, the creepy old fat man uses dirty words sometimes!), you are almost certainly uninitiated.

There are plenty of dissenting opinions, such as this sort of horrifying article called "Glamour Babes" from the Washington Post. That's a scary article, and it left me with a sinking feeling in the pit of my stomach all day.

Despite my misgivings, I took Schuyler to the party anyway, because the time she spends with other kids outside of school is precious to her, particularly when it's with other kids with disabilities. Also, I would be there scowling menacingly at anyone who tried to dress my daughter as a crackwhore.

I'm not going to dispute the issues of Club Libby Lu as a concept, and I am sure that a lot of parents have a different experience than I did. But today, when the local Club Libby Lu found itself host to five little girls with varying degrees and types of disabilities, not a one of them capable of unassisted speech, the gum-smacking Hannah Montana clones working the party did something I'm not sure I was expecting.

The long version is that they dressed Schuyler and her friends in sassy glam rock outfits and put up their hair in trendy, hairspray-shellaqued styles. They made up the girls' faces and assisted them with creating bubblegum-smelling lip gloss and let them shower each other's heads and clothes with sparkle dust. (Schuyler took particular joy in putting a generous handful in my hair, too. Every time I move my head, the world in front of my face becomes a Disney movie special effect.) They ended the afternoon with a little dance party and a group photo. The Libby Lu staff laughed with these kids and listened to them jabber excitedly along every step of the experience, and if they were put off in any way by the fact that almost none of what was being said to them was intelligible, they did not let on even for a moment.

The short version? Club Libby Lu transformed five broken little girls into absolutely normal tween pop culture princesses, if only for an afternoon. And for that, I will never speak a word against them. 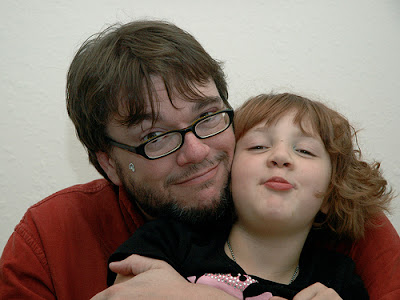 Email ThisBlogThis!Share to TwitterShare to FacebookShare to Pinterest
Labels: my big opinions, schuyler, shepherds of the broken

Rob, that's beautiful. I think you went in thinking the same thing i was thinking... that these staff members would be "eww, i'm not touching that weird little cyborg! Gah."

part of me thinks that the staff of camp libby lu went home that night and said "we had the cutest birthday party today..." and they shared their side of the story with their family.

I had a similar experience the morning of my sister's wedding. we all had (7 of us) a Salon Date to get made up -- hair, makeup, toes, fingers etc... it is camp libby lu for grownups. I'm not pretty, i don't wear makeup, i don't do hair... i am not comfortable with these things. but the girls there were sweet, helpful, complimentary (wow, your hair is amazingly soft! your skin is perfect!) without being all fake about it. i expected them to say "ewww, i'm not touching that fat one!" but they made me feel like a rockstar by the end of the morning.

and by the looks of it, Schuyler looks the rockstar too. Glad it wasn't the horrible experience you thought it would be, and that the girls all enjoyed themselves.

And for that, I will never speak a word against them.

Nor will I, Rob. Love that picture of you and your girl.

that is so cool.

never thought i'd be saying that about such a thing, but your post was sweetly touching.

glad Schuyler gave you a tad of glam, too!

Rock stars are rock stars, dude, and should always be treated as such; I'm glad the party planners knew that. Even Chrissie Hynde slaps on the eyeliner, you know.

Your girl is astounding. I'm glad y'all had fun.

Awesome. Future teachers in the making. Makes you feel hope for our future doesn't it?

I just cried when I read this entry. How cool that the staff there did what they were supposed to do--- make each party special. How cool. Sandi, you are right. It makes me feel good about our future.

Hooray for things being better than expected.

I love it when people surprise you in a good way. It's an awesome gift in life.

I don't know why this post made me cry...but it did.

Although, in theory I hate the idea of Libby Lu, my daughters' experiences there have been similarly positive.

You should send your post to the higher-ups at Libby Lu. They should know that the staff of that store did such a great job.

Whoa. The beard is back and rockin'.

"Like, OMG, totally awesome!" Seriously. Fab post about a fab event...and your daughter in that first pic? Looks like a tween star! Look out world, here vomes Schuyler!

I needed a reason to believe that Club Libby Lu isn't the devil incarnate. I still think that what they are and the unhealthy gender socializing that goes on there are shameful, but I am genuinely pleased to hear that they were able to make such a cool experience for Schuyler and her friends. I might not like the pop culture princesses...culture that they were emulating, but I sure as hell think it's cool that they were given the opportunity to do so!

That rocks so hard I don't even know what to say.

Yeah, that article from the Post terrified me, too, and my daughter is only 15 months old. But I loved your personal take on the experience. That's awesome, and exactly what they should be doing, too.

Seriously, Rob, send this post, or an slight variation on it, to the manager of the Club Libby Lu. What a great story and those girls should be recognized for their great work. Not all teens/young adults would handle the situation with such grace and, for lack of a better word, "normalcy."

I'm with kris. It sounds like the girls were treated normally, which is such a blessing. I say, give a big gold star to each of the Club Libby Lu folks.

I suspect the Libby Lu experience is extremely dependent on the tone set by both the party thrower's family and the local outlet's staff. Seems like you won the normalcy lotto in both games. A whole bunch of people who understand that sometimes little girls like to dress up like crazy sparkly pink freaks and that it's cool to let them know that sparkly and pink is an option but not a necessity.

I want sparkle dust in my hair now. Sounds like an awesome afternoon.

That is one happy-looking little girl, and at the end of the day that's the opinion that's coming through loudest.

I'm new to your blog. I'm enjoying it.

Thanks for sharing your story.

The pictures in that article seriously freaked me out. And I love horror movies. You are a brave man.

I'm glad it was such a great experience. :)

My daughter has attended the Libby Lu parties and enjoyed them a lot.

I am so happy that my daughter outgrew that store because my wallet couldn't handle it each time we went to the mall.