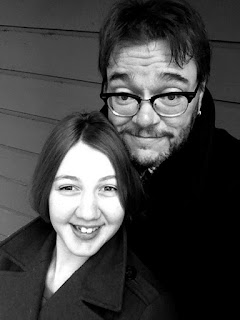 Sometimes we allow ourselves to forget.

Friday was a rough day for Schuyler. Not one but two seizures, we believe, and the second one actually left her in tears. The confusion, the disorientation, the light-headedness, they upset her. She's aware of when something isn't right with her broken brain. Well, of course she is.

(Note: Before I go any further, there's something I probably haven't made clear. I know it seems like I share everything here, but the fact is that I don't, not by a long shot. I think that's appropriate.

But when I talk about the confusion and anxiety that we feel about Schuyler's seizures, I might be giving the impression that we are just sitting here on our hands, muttering "What the fuck?" and crying ourselves to sleep. I've gotten a few emails suggesting that we're not doing enough, or even anything at all, for Schuyler, based on that erroneous assumption. Please, don't be that person.)

We've been trying to catch one of them on video, but it's tricky. Search for "complex partial seizure" on YouTube and you'll see why they are easy to miss. Schuyler's seizures are mostly become apparent by their after-effects, the moodiness and the confusion. Sometimes she tells us that she is dizzy, which seems to happen right before a seizure, but mostly she simple tells us sadly after. "My brain is mad at me."

So we didn't catch them on Friday. One occurred as she was waking up, we think, and the other in the car as we went to a movie. We tried to give her a happy afternoon, however, and by the time we engaged in some strict "cheeseburger & milkshake" therapy, she was mostly over it, aside from being tired.

We were all over it, I think, until I got a Google alert email on my phone. I have one set up for "polymicrogyria", just in case some new bit of helpful research is posted online. But that's not usually what it catches. And it wasn't this time, either.


From The Toronto Star:

“A beautiful, angelic child, full of grace and patience,” writes Anthony Moyson of his son, Isaac Dylan, who died in February of a rare brain disease called Polymicrogyria, aged 13.

I like to believe that Schuyler's monster now has blunted teeth and clipped claws. I think it probably does, mostly. But as her maybe-seizures get maybe-worse, we are reminded of the impermanence of health and the persistence of monsters.

This time of year, sleepless nights seem especially cold and dark.
by Robert Hudson at 8:06 PM

Email ThisBlogThis!Share to TwitterShare to FacebookShare to Pinterest
Labels: health, nowhere near holland, schuyler, the monster

I can't imagine what must be running through her mind when she is having the seizures. It makes my heart hurt for all of you.

I feel for you. It's awful -- seizures, the whole thing. Truly awful. I don't have any wise words -- only solidarity, and I hope there's comfort in that.

I'm so sorry! I can't begin to comprehend how scary it is for all of you, specially Schuyler. All I can offer are my prayers and to tell you that I truly appreciate - and am inspired by - what you share on this blog. Screw those people who say you're not doing enough for your kid because you ARE, and no matter how much time Schuyler has on this earth I know just by reading your posts that you are giving her the best life possible by being her loving parents and staunchest advocates.

I hate the fear that seizures bring to our lives. It's something that I haven't really addressed because my 14 year old reads my blog (when she's really bored) and I don't want her to know how scared I actually am. I'm afraid of losing Sam. It means that I have anxiety every time I have to be away from her, I won't go more than 5 minutes away from school while she's there (luckily our house is in that range!), and I always check to see if she's breathing when I wake up at night. The coordinator for the Epilepsy Foundation in our area lost her daughter to a seizure at the age of 3, and it hits way to close to home. Before Christmas someone had me make an angel in memory of her little girl who also died from a seizure. When I learned that I cried and cried...it's my biggest fear, and I live with it every freakin' day.

I hope you guys get one of Schuyler's seizures on video soon...I know it's hard. And I hope you find a neuro who is good, because those aren't that easy to come by.

I hated witnessing my brother's seizures (he had a brain tumor). They were this visible, scary reminder of his tumor when we were trying to maintain some sense of normalcy. Hoping these become a thing of the past for Schuyler, and you can spend more time having cheeseburgers just because you want to.

My wife used to have complex partial seizures, so I know exactly what you are going through on that front.

I also remember just how worried I was the first few times I saw one happen, and how scared I was the first time my wife had one so bad she literally turned blue, so I hope you will understand my mixed feelings when I grit my teeth and express my wish that you get to witness one. Rationally speaking, however, I have to say that knowing was better for me than not knowing, so I hope you do see one, and also I hope that Schuyler's are at the (poor word, but it's the best I've got) "gentler" end of the complex-partial spectrum.

have you thought of getting a seizure dog for her or is there just no point to that? they can alert you to when they are coming and be there to comfort and protect when they are over...

Even though I'm learning about seizures, how to treat them, and other assorted stuff related to what your family is going through, I can honestly say that a) I don't actually have any clue what you're going through except that b) I am learning SO MUCH from what you choose to share here and thank YOU for sharing and being open about what you are facing.

Words cannot express how sorry I am for you all. We know how hard you fight for Schulyer. I respect your amazing ability to continue to search for a way to beat her monster while trying to give her the life every teenager wants and needs (ie "cheeseburger and milkshake therapy").

Hello, My name is and my daughter Jori was just diagnosed with Bilateral Perisylvian Polymicrogyria at the end of October. She is 7mo old and not only is she having the partial complex seizures but now also has Myoclonic seizures as well. So to say we are going thru Hell is an understament becasue not only did we just learn this about Jori but my husband Jason had a seizure/ mini strok at the beginging of December. One of my best friends created Jori's Journey on facebook, and she also found your blog that I have just started following. I know we have a long road ahead of us, but I'm so glad to know that there is support out there and I hope that my daughter will grow to be as stong and brave as Schuyler! Thank you!

I just gave birth to a full term baby girl. I was and I'm still not prepared for what I or my Baby have to face. Jennifer was diagnosed with Microcephaly and Bilateral Frontoparietal PMG. She is not able to eat enough by herself and is getting a g tube this week. We where fighting this surgery until now and feeding her for hours every day trying to get enough food in her stomach, NG tube in and out...one day is better and we feel better and want to forget until the next rough day and we realize again this is not going away as much as we are in denial. I'm very afraid of seizures. I never thought this could happen to us. Not only our life will change, I'm a changed person since the day Jennifer was born. You are so brave and god love your child, she is so sweet. We have been watching her on you tube. Bless your heart and thanks for sharing.