Talking boxes on the tee-vee! 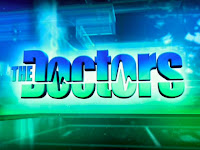 For those of you interested in AAC technology and the world of people like Schuyler, Samuel Sennott and his brilliant AAC app Proloquo2Go will be featured on The Doctors tomorrow (Friday, April 23).

The program deals specifically with autism, so there's sure to be lots of crazy talk and fighting and people throwing chairs at each other over vaccinations and gluten and alien abductions and all that.

Okay, well, probably not. But I'd watch that show for sure.
by Robert Hudson at 6:24 PM 10 comments:

Email ThisBlogThis!Share to TwitterShare to FacebookShare to Pinterest
Labels: big box of words

Every time I write about corporal punishment, I get more angry emails and comments than any other topic. Seriously. And keep in mind the number of times I've referred to special needs kids as "broken", or Easter as "Zombie Jesus Day". When I express my highly charged and controversial opinion that folks who incorporate physical violence against their kids into their parenting toolbox might want to rethink that particular approach, I get reactions. Some people like to suggest that I write about it specifically so that I'll get the reactions that I do, feeding off the conflict like some kind of emotional vampire.
Actually, that's not why I do it. I write about it because (and again, this might come across as radical liberal crazy talk) I believe quite strongly that hitting your kids is a somewhat fucked up thing to do.
Anyway, you've heard me talk about it before, so this time, I'll simply link to a story on NPR ("Spanking Leads To More Aggressive Kids", April 12, 2010). The report discusses a new study published by the journal Pediatrics, which showed that kids who were spanked more than twice a month as three-year-olds were considerably more likely to become aggressive five-year-olds than kids who weren't spanked.
So there you go. You may now fire up the "there's nothing wrong with a little swatty-poo on the hiney if it keeps my dear wee ones from running in front of a locomotive" and "I was spanked as a child and I turned out to be a model citizen who only occasionally shoots up a post office" comments, starting... NOW.
by Robert Hudson at 3:18 PM 53 comments:

Email ThisBlogThis!Share to TwitterShare to FacebookShare to Pinterest
Labels: health, my big opinions, shepherds of the broken How Schuyler passes the time at conferences
Originally uploaded by Citizen Rob
Despite my past work as an IT guy, it is an undeniable fact that I am not much of a technical person. It's worth noting that I did Mac support in the past, after all, and during the scary year and a half that I had to provide support for both Macs and PCs while at the Yale Med School, I mostly brought people skills to the table. I was pretty bad at the tech side of it, but I worked with nice people who were always ready to help me. So yeah, I was awful. I needed a lot of help.

It would be silly, then, for me to pretend that I had much to add to the tremendous amount written over the past week or so about the new Apple iPad. (I will say that as an ebook reader, I thought it was brilliant, even without digital ink, and I can see now why the Amazon folks have been such babies about the whole thing.) But there's one aspect of change that the iPad presents that I haven't read much about which I do think I can comment on, and that's in the field of assistive technology, specifically alternative communication.

Week before last, Schuyler and I attended an extraordinary AAC workshop at Vanderbilt University's Peabody College in Nashville. During the discussions over the two-day period I was there, it became clear to me that even in the past few years in which I've gone from a pain-in-the-ass parent to a published author and advocate (and yeah, a pain-in-the-ass parent still), the AAC world has changed. The basic concepts and the language approaches have remained constant, but both the technology and the design philosophies have advanced dramatically since 2005, when we first came on board.

In both those areas, I think the iPad has the potential to be a game changer for AAC. More than potential, actually. I think that for ambulatory users like Schuyler (which includes the huge population of individuals with autism, too), the changes being heralded by the iPad are inevitable.

The technical reasons are clear enough. The iPad uses the same touchscreen technology as Schuyler's speech device, so it's familiar. But it also brings a multi-use advantage, it gives her easy access to internet and ebooks and, well, everything else that has been well-documented by all the iPad hype. And that leads directly into something harder to quantify but still wildly important: the social piece.

Shortly after my book came out, we travelled to the American Speech Language Hearing Association's 2008 conference in Chicago, where I had the pleasure of speaking with Richard Ellenson. Richard was a successful ad executive and designer whose own son has severe verbal limitations due to cerebral palsy. When existing speech devices didn't work out for his son, Richard developed one that focused on fast, effective communication. The resulting device, the Tango, changed the way people thought about design and social integration of AAC for young users. The Tango wasn't particularly earth-shattering as a speech device, but its innovative design made it fit seamlessly into a contemporary kid's digital world.

"If you walk around this hall, you'll see a lot of impressive and wonderful innovation," Richard said to me at the ASHA exhibit hall. "But all this technology says the same thing when you walk in a room with it. It says, 'I have a disability.'"

AAC developers have been figuring that out. Schuyler's current device, her beloved Pinkessa, is a good example of the principle, and her enthusiasm for her device usage jumped considerably when she got it. But the iPad takes that social integration piece and marries it to a leap in technology and information access and, yes, to COOL. To you and me, cool is a pleasant luxury. To kids with disabilities, cool is elusive, and a powerful motivator.

If you know anything at all about AAC, you're aware that other big thinkers are way ahead of the game. One innovator I met in Chicago on that same trip is Samuel Sennott, and we've remained friends ever since. Sam developed an AAC app for the iPhone and iPod Touch called Proloquo2Go, and even when it was first released, it was clear that when the iPad came out, this app would be a natural fit. The moment the first iPad was sold, Samuel was ready to turn it into a Big Box of Words.

Schuyler's been playing around with Proloquo2Go, and she's shown some intuitive aptitude for it. We're all about giving her different and multiple options for communication, and we have been all along, even before we found AAC. Proloquo2Go may very well become one of the tools she uses regularly. But after five years with Schuyler's Big Box of Words and then Pinkessa, we remain deeply committed to the Prentke Romich Company and to Unity, the Minspeak-based language system that their devices run and which, I believe, gave Schuyler her chance at the kind of life where her monster doesn't get to call the shots and write her story for her.

So if I woke up tomorrow and found myself suddenly running PRC, the very first thing I'd do would be to develop an app for the iPad that would run Unity. I'd sell it on iTunes, and I wouldn't sell it cheaply. I'd do this because I would know that even if I sold it for hundreds of dollars, people would buy it, gratefully. Not every user, certainly, or even most of them. PRC's devices facilitate use by just about anyone, and I suspect that many of their users, perhaps most of them, are not ambulatory enough to use a iPad. Schuyler's device is ready to be used with a wheelchair mount, a head switch, an eye gaze system, or any other number of facilitations for varying degrees of disability. Companies like PRC will continue to make and sell their amazing devices because they are changing the lives of people every day, and giving them voices.

One day, and perhaps not that long from now, those users will want integrated devices, too. PRC already makes a speech device/PC hybrid, and I suspect other manufacturers do as well. But as of now, for the users who are ambulatory and capable of using a device like the iPad, there are suddenly options, not just to communicate and to be able to afford an AAC-ready device without third party funding, but also to join the rest of the world in using some very cool technology and subsequently being, in a tangible way, part of the very cool crowd.

Trust me, that option for coolness means more to people like Schuyler than it does to you and me.
by Robert Hudson at 11:23 PM 30 comments: