It's Monday, which must mean 1) your weekend is over, sorry, and 2) I have a new post up at Support for Special Needs.

This one is a little dark, although it's also one that I'm slightly more proud of than usual. It deals with a subject that a particular, often forgotten about subset of special needs parents don't usually like to talk about but which never leaves our minds entirely: the possibility of our child's disability proving to be fatal.

It's something that has been on my mind a lot lately, mostly because of Schuyler's increasing seizure activity and that recent story about a kid Schuyler's age who died as a result of his own polymicrogria. I thought it was time for a reminder, perhaps mostly to myself, that among all the things we advocate for, significant and petty alike, some are beyond our reach.

Major league bummer, I know. Here's a picture of Schuyler's cute little piggy (buckled up in the car because, you know, safety first), just to cheer you up. (Schuyler is into these big-eyed animals now, and I have to admit that whoever came up with them is a genius. I never had a toy make me feel guilty for NOT buying it before. I know, I have Issues.) 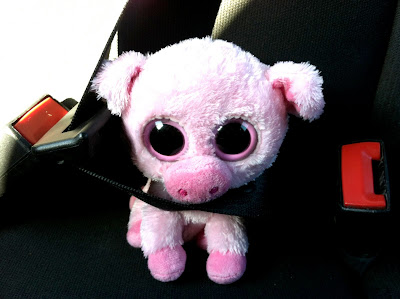 If only I could articulate as well as you! Incredibly well written. Thank you.

Beautiful and poignant. Thank you.

Heading over to read your article now. And by the way, I love Schuyler's little pig. I'm a huge fan/collector of pig "stuff," but I don't have one of the little bug eyed ones yet! Totally jealous! :P

Yep, live with the Big Bad and embrace and cherish and live, the best I can, everyday , appreciating and soaking in the Big Good..

I have heard other speak of the crystal ball they wished to possess.As if a vision of what lay ahead, might help them cope with today, I am quick to retort, that I would not want to gaze into that ball, for if I do, the visions I see might make living all my today's absolutely impossible and in turn might spoil the incredible joys awaiting us all.Because that is the key. Allowing the the grace and beauty to dwell alongside the the depths of fear and sorrow.

The Holland thing never did it for me. Ever.

Thanks for another great piece of writing.

My 8 month old son also has PMG. I've been reading your blog since he was diagnosed but have never commented. That was my favorite post I've read. I can relate to everything you wrote about and it brought tears to my eyes. Very well done.

One of my favorite articles. Trying to describe how much more intensely we must live, having danced once with the big bad and lost, and having it sitting on the front sidewalk, waiting, is always difficult for me. I don't want to assume other parents aren't as present & goodness knows my kids can drive me crazy sometimes, but that *knowledge* is precious.

Rob-
Said so well. Welcome to Somalia, indeed. The monster in our closet is that big, sad motherfucker known as "What Might Have Been".
Yeah, that one sucks, too.